While in high school Ghanaian-born businessman Kris Senanu was a disc jockey, played in a band and acted in the school theatre. He is currently deputy CEO at Nairobi-based data and IT solutions provider AccessKenya Group. 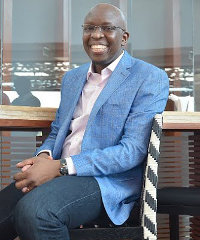 And in addition to a successful career in corporate Kenya, the self-described serial entrepreneur has also invested in a number of businesses through BlackRock Capital, an investment company he co-founded seven years ago.

His early interest in entertainment later played a part in Senanu’s investment decisions. Although BlackRock has investments in several sectors across the continent, its key businesses are in the entertainment industry, including four pubs and clubs and a new West African restaurant in Kenya’s capital Nairobi.

Senanu attributes this to both his understanding and a passion for arts, music and fashion. And although he describes pubs and clubs as competitive and “very fickle”, he believes there are opportunities due to a growing middle class with income to spare and spend on fun activities.

Benefits of being an insomniac

An insomniac, Senanu sleeps five hours on “a good night”. This affords him time to manage his busy schedule that involves dealing with work, investments and mentoring entrepreneurs.

“It’s never been a hustle,” he says, adding that his commitment at AccessKenya has never been compromised because of his personal investments. “If my phone rings at 10pm I do what I have to do for the client. But as opposed to leaving the office at 5pm to go to a bar, I’d rather spend that time with a budding entrepreneur, mentoring them and sharing my knowledge.”

He currently mentors two entrepreneurs every year, offering coaching, guidance and sometimes even the funding to actualise their ideas. Senanu notes one of the things people get stuck on, even when they have good ideas, is the “how to”. He ascribes this to limited training on entrepreneurship earlier in life, and a lack of case studies “people we can relate to”.

He advises aspiring entrepreneurs to seek advice from those already in business.

Entrepreneurs should also take an honest look in the mirror, and understand their strengths and weaknesses. He says trying to improve on one’s weakness, as often advised, “is a waste of time” since one can never become better than the person to whom that particular weakness is a strength. Entrepreneurs should instead leverage their strengths and hire people who are good in the areas where they have weaknesses.

His own strengths lie in communication, negotiation and crunching numbers. “I am able to condense a complex business plan into five bullet points,” he says.

On the other hand, he is “not a very patient person” and finds it difficult to have conversations with people who can’t give him his numbers fast. Legal details are also not his forte, so he has people better at it carefully read contracts before he signs.

Although some of BlackRock’s businesses have done well, Senanu notes about six investments have failed and lost “a lot of money”. In a 2013 interview Senanu told How we made it in Africa he had lost about 9.5m Kenyan shillings (US$113,000) in a software company that failed.

But that hasn’t deterred him from betting on more entrepreneurs. “I am not a quitter. I am a serial entrepreneur,” he says, adding that every loss has come with valuable lessons that helped BlackRock make profits in other ventures.

For instance, the software company was founded on a great idea but the person behind it tended to give up at the face of every obstacle. “I learned that an okay idea with good execution will go much further than a great idea with poor execution,” he says.

And to thrive in today’s market, every business must strive for sustainable competitive advantage. The entrepreneurs behind it should also be patient and not expect a meteoric rise. “There is no escalator to the top. You have to take the stairs, and at each step there will be barriers,” he warns.

‘Africa is my stomping ground’

Senanu is a proud pan-Africanist. When he was young his family lived across Africa and Europe. He views himself as an African with a Ghanaian passport, adding that he has never lived his life chained to Ghana.

He would like his legacy to include being a lobbyist for an African passport. He laments that Africans live constricted lives because of lines drawn on the continent’s map by foreigners centuries ago.

“We now call it territorial integrity. The way I see it, Africa is my playground and I am not mentally chained to Ghana or Kenya. I am African, and this is my stomping ground,” he concludes.