Mitchell Elegbe, founder and group managing director of Nigeria’s Interswitch Limited, a pan-African integrated payment and transaction processing company, said he believes the company should have started with its African expansion sooner. 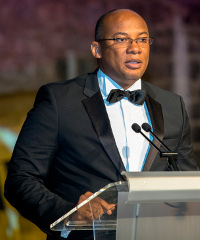 While the company expanded to East Africa with moves into Uganda three years ago and The Gambia last year and has some customers in other African markets, Elegbe told How we made it in Africa that they are presently looking into expanding further into Africa, adding that this should have been a key strategy for the company sooner.

His comment highlights the opportunities for electronic payments in Africa, as well as the advantage for companies to be a first mover in many of the continent’s markets. “There is a lot of work to be done around payments [in Africa].”

Interswitch started operations in Nigeria in 2002, and has since become a leader in providing technology integration, advisory support, transaction processing and payment infrastructure services to governments, banks, and various corporate organisations.

Elegbe, the entrepreneur behind Interswitch’s success, has won a number of business leader and managerial awards. Most recently, he was awarded the Transformational Business Award by the African Leadership Network at the 2013 Africa Awards for Entrepreneurship this month. The award is in recognition of a notable business leader who has created significant socio-economic impact in Africa by building a business with revenues greater than US$50m.

According to Elegbe, the inspiration behind starting Interswitch was based on the difficulties surrounding cash-based payments in Nigeria at the time.

“Many years ago one of the problems that we had was the way payments were being made. It was very inefficient, very cumbersome, and not safe because everyone relied on cash,” he explained. “So I thought that problem was one that can be solved, so we went about it; to solve the problem of electronic payments.”

“So you have somebody who invested NGN 10m in this business [in 2002] going away with NGN 2.6bn after eight years; that to me was real value,” he said when asked how he would define his success as an entrepreneur. “Creating value for shareholders to me was a good sign of entrepreneurial success.”

With little managerial experience, Elegbe started Interswitch four years after graduation at the age of 32.

“To wake up one day and to realise a business of NGN 200m is now NGN 26bn was to me a high point in my career,” he said.

Another high point for Elegbe was the realisation that Interswitch had become a top employer. With further expansion of electronic payments in Africa, the company would set in motion a job creation chain, he said.

“In Africa we have a lot of challenges around job creation,” he explained. “We talk about poverty because people want to work hard but they don’t have jobs. So creating processes, practices that will help create jobs for millions of Africans, is to me is an objective most organisations must continue to strive for.”

Today Interswitch has over 20m customers and a growing presence in West and East Africa. Last month the company announced its Switching and Processing Division (Interswitch S&P) has completed third party payment processing integration with Visa, offering consolidated services to financial institutions and retail businesses in the Nigerian market.