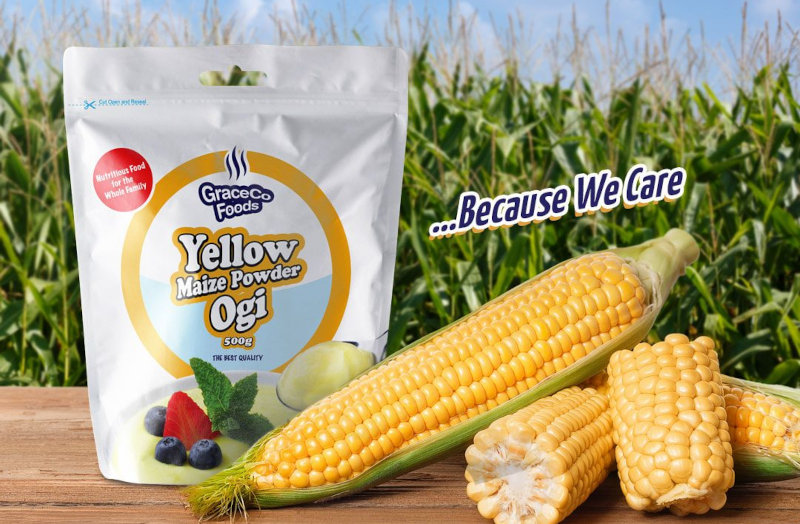 An advertisement for one of GraceCo’s ogi products.

Most large manufacturing companies in Africa will import machinery from China or Europe to scale up production. While imported equipment is suitable in most cases, food processors can run into problems if they want to mass-produce local African food rather than international fare.

For example, there are very few options for companies that want to buy machinery specifically for the maize meal staple known as “ogi” or “pap” in Nigeria. The powder is mixed with water to make an instant meal and it is common across many parts of sub-Saharan Africa. The lack of machinery presents a problem for manufacturers that wish to mass produce a foodstuff that is mostly produced and sold by informal traders.

Tunji Kalejaiye, executive at GraceCo, a Nigerian food processor and manufacturer, says that to solve the problem he has designed a unique machine to manufacture ogi.

“I can’t just go and buy a piece of machinery for ogi, I have to develop machinery in order to scale it up. We are currently testing it and we are hoping in the next 18 to 24 months it will be ready. We are going through a process where we can scale it up,” he says.

As one of the first machines in Nigeria to mass produce ogi on an industrial scale, Kalejaiye adds that he may patent the technology after it has been completed.

The ogi machine is a key part of GraceCo’s expansion plans. The company was created decades ago by Kalejaiye’s mother, Princess Grace Adedayo Adefulu.

At the beginning, the Lagos-based company’s main products were icing sugar, cakes, cupcakes and popcorn. It then diversified into pounded yam, ground rice and plantain flour. Indeed, over the last decade GraceCo has changed its strategy to produce local food that is consumed on a wider scale like ogi.

This comes with several advantages, Kalejaiye says. One is that it cuts out supply issues when importing ingredients for cakes like colouring and emulsifiers that are not produced in Nigeria. Foreign exchange fluctuations also mean that it is hard to predict how much of the budget should be allocated to imports.

“That affects the bottom line, it affects the margins. That’s one reason why we went towards the ogi food line because the majority of those things we can get locally, we have some level of control. But with the cake it is much more difficult,” Kalejaiye says.

When Kalejaiye’s machine is ready, it will be one of the few large-scale ogi processing facilities in Nigeria. The former engineer says that it will ramp up ogi production from 25 metric tonnes to 100 metric tonnes per month. The company currently produces the popular staple through a largely manual process.

The machine will also reduce the amount of time needed to process the maize from five to three days. The finished product is sold in 25kg bags to businesses and 500g to individuals who are required to add water to the dry maize meal in order to make the ogi.

The main strategy to compete with small kiosks selling ogi across Nigeria is to make sure that GraceCo’s product is better packaged, better quality and cheaper. Kalejaiye says that the machinery will be a key part of making the company’s ogi cheaper than local equivalents.

“With our manufacturing process you can scale up and I can get our price to less than the backroom manufacturers. It’s economies of scale, we can make it cheaper,” he says. The company is also investing heavily in packaging with plans to make a single-use container that allows customers to put the ogi in a microwave to create a ready-to-eat meal.

Aside from the domestic market, GraceCo has started exporting its ogi to the US and UK where there is a large Nigerian and African diaspora.

“There is a lot of demand, we are sending containers every month. We have also had enquiries from Canada. Anywhere where you have Africans there is a tendency for them to take ogi, especially where it is cold as you can use ogi as a warm breakfast,” Kalejaiye says.

That said, the former engineer says that the company’s first priority is conquering Nigeria’s huge domestic market which is home to more than 200 million people.

One of the main challenges for GraceCo is finance, Kalejaiye says.

“The biggest thing in Nigeria is funding. You can’t get finance for anything. For a company like ours elsewhere in the world we would probably have people knocking on the door wanting to help to take us to the next level, but here it is a challenge”.

He adds that the company has had to take a few high interest loans to pay for the equipment but that they have had “no choice”.

“If we don’t produce we don’t make money so it will be a balancing act,” he says.

However, Kalejaiye is optimistic about the future and he says that if the ogi machine goes well, GraceCo will think about mass producing other snacks based on staples like millet, sorghum, cassava and rice.