Sitting in traffic has to be the one thing every Nairobi resident hates. To skip the city’s notorious gridlocks, many leave for work in the wee hours of the morning. 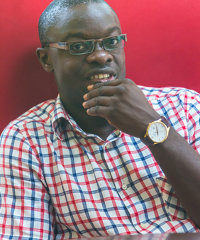 When he landed in Nairobi early one morning two years ago, Nigerian entrepreneur Princewill Omorogiuwa found himself stuck in traffic on the road leading into the city from the airport. Rather than frustrate him, the sights of a city getting up early to work was confirmation he needed to expand his business to Kenya.

“It was early, still dark and traffic was already building… that only happens in Lagos,” says Omorogiuwa. “I said to myself, ‘any city that wakes up that early in the morning, has got potential’. I don’t care how others see it – but to me it shows these people are not lazy. I found it shocking because someone had painted to me a very ugly image of Nairobi about 12 years ago.”

Omorogiuwa runs the Simon Page College of Marketing, which recently opened in Nairobi and also operates in Ghana and Nigeria. Simon Page provides professional qualifications and postgraduate courses in marketing accredited by the Chartered Institute of Marketing (CIM), the world’s largest organisation for professional marketers.

Omorogiuwa set up the business in Ghana seven years ago. He previously worked in London training marketing professionals. In the UK, Omorogiuwa says, he trained nearly 3,000 students from 100 nationalities and most were doing well in their careers after completing their training. But in Africa, he noticed many students studying for the qualification were performing poorly in their exams. As a result they incurred additional costs to re-sit the exams, while others gave up all together believing the exams were too hard, hence missing out on the benefits of being a chartered marketer.

“I couldn’t help but feel guilty, and I thought of the idea of offering this kind of training back home,” says Omorogiuwa. “By the time I left England I was being paid the equivalent of US$156 an hour. So I gave up a well-paid job because I knew I could scale this in Africa and build an education brand across many countries.”

Omorogiuwa notes there is demand for globally recognised professional qualifications among graduates in Africa who want to stand out in a highly competitive job market.

“Over the last two decades so many people in Africa have earned degrees, but often the quality is questionable. So people want to compete, they want to have that extra edge. They want a critical professional qualification that employers won’t doubt, [and] they want to apply themselves better in their current work.”

He first set up Simon Page in Ghana because it was cost-effective and an easier market to operate in compared with his native Nigeria. The college opened a campus in Nigeria’s commercial capital Lagos two years later.

“In the beginning I was a bit anxious if Nigerians would accept a business from Ghana. We were flying all our staff from Ghana and that was a concern. But Ghana has a very good reputation for education and many of my peers were at some point trained by Ghanaians in Nigeria. So in fact the Ghanaian origins helped us a lot. Now, between Nigeria and Ghana, we train 600 to 800 students a year for CIM professional marketing qualifications.”

Omorogiuwa plans to leverage Nairobi as a hub for wider pan-African expansion with immediate plans to open in Zambia, Botswana and Mauritius. Although Simon Page’s Nairobi campus was broken into barely a month after it opened and most equipment stolen, he remains optimistic.

“Kenya Airways flies to most of Africa and this is vital when trying to manage businesses in various countries. Kenya also has this crop of really well-educated people so we have been able to hire locally. Our Kenyan staff have less visa issues when travelling compared with us Nigerians, so Nairobi fits in with our bigger expansion plan.”

One of the biggest lessons Omorogiuwa has learnt in entrepreneurship is trust.

“This business would be half the size if I didn’t trust some 20-somethings,” he says.

To build a thriving business, he notes, entrepreneurs should stay focused, hire promising young people and help polish their skills while building an employee-friendly work environment.

“My utmost responsibility is growth, because through growth we can retain our top talent and also attract good calibre people to join us.”