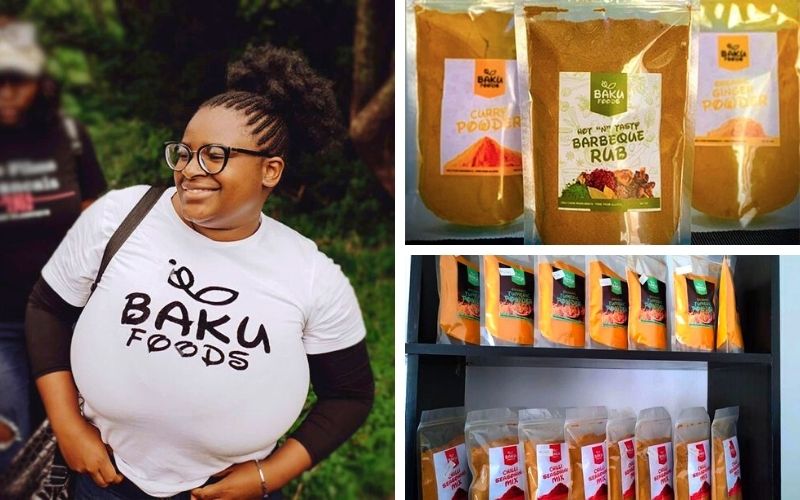 Ruth Damar capitalised on her love of spices and dived into the start-up world.

“Across the world, people are beginning to be deliberate about their health and environment. This extends to people who are exploring nature to cure or prevent certain diseases. We are what we eat,” announces Ruth Damar, founder of Baku Foods.

She’s speaking in her coffee shop, which goes by the same name, in Jos, Nigeria. It’s an intimate space, busy with the hum and clink of coffees and smoothies being prepared and in one corner, a local tv personality is quietly tapping away on a laptop. “Across the world” clearly extends to this corner of Nigeria, where a connected and mobile youthful population is just as concerned about their health as anywhere else. That is good news for Damar, who founded her company to tap into the international trend.

Jos is cool in December, averaging 20 degrees centigrade. While temperatures spike higher at midday, early mornings are chilly. This day is no exception. Damar has a constant stream of patrons wanting to warm up with a hot beverage. In summer, when temperatures can reach 31 degrees centigrade, they switch to cooling smoothies. But the coffee shop, which advertises healthy offerings, is just a “shop window” for Damar’s wider health foods business.

It all started with a leap of faith.

Damar had watched her mother’s endless struggle with illness since she was a young child. It was an emotionally painful experience, sometimes leaving her with a deep feeling of helplessness. She remained optimistic that a remedy would be found. In the meantime, she found a way to lessen her mother’s financial burden.

At the age of 18, when Damar was still a political science student at the University of Jos, she decided to launch a start-up. She had become obsessed with spices, mostly for their food-flavouring value. That would become her side-hustle.

Launching into life as a spice entrepreneur, Damars did the unexpected. She confided in her mother, and the duo came up with what seemed a risky solution, using her school fees to scale up her business.

“My mum was like, this one (time) your dad is giving you your school fee early … let’s see how we can double the money,” she said.

Her mother linked her up with a woman who taught her how to make chilli seasoning, locally called yaji, and to package it to sell to her college colleagues.

Using 5,000 naira from her tuition money to make her first batch, her yaji became an instant success.

“I had a lot of customers from my friends and recommendations, the yaji was really nice,” Damar said.

But concerns over Damar’s mother’s health still lingered. They had tried almost all possible remedies and visited many physicians without significant improvement.

This almost drove Damar to despair. But refusing to give in, she kept on researching, until at last, a eureka moment: “I realised that most of my mother’s ailments were because she was taking an excess of foods that have chemicals,” she said, adding that many seasonings, as well as as an excess of common substances like the gluten found in wheat were to blame for a growing number of health challenges.

“For me, it is about removing anything chemical or unhealthy to the body. When I realised the health benefits in spices and herbs I began to study more and learn the combinations,” Damar said.

She set out to actualise her initiative.

“I thought, since I’m passionate about people eating healthy, it means I can do other things that have to do with spices,” she said.

“I have realised that spices and herbs help in the healing process. This has given me a chance to help others,” she explained.

Damar sees further potential for growth for her company thanks to the increased awareness of the benefits of natural health amongst Nigeria’s youth.

“It is a healthy food brand that is 100% organic, grown without chemicals… Suppliers are painstakingly selected to meet the criteria,” Damar said.

All raw materials are sourced locally, except for cinnamon spices, which she sources from outside Nigeria. Her products are sold to resellers who package for retail and she also sells to restaurants. She also runs campaigns on healthy eating on social media and suggests dietary options for people who are sick or recovering

Damar is now in the process of seeking registration with the Nigeria National Agency for Food and Drug Administration (NAFDAC) for certification to expand her business.

“I will be able to sell more, even in the supermarkets, and can also export my goods. I just want to win, I want my products to help more people, and the bigger my business the more people I can help,” she said with enthusiasm.