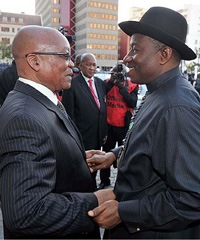 This almost 90% increase in GDP saw Nigeria officially overtake South Africa as the largest economy on the continent, and become one of the top 30 largest economies globally. However, according to CEO of Frontier Advisory Dr Martyn Davies, it is important to look at the bigger picture when it comes to Nigeria’s new label as the number one economy in Africa, emphasising that it does not suggest a more successful economy than South Africa, but simply a larger population.

“No country became rich through buying consumer goods. They become rich through saving, investing, innovating, embracing technology, driving productivity… Not GDP,” Davies told How we made it in Africa.

While he added that Nigeria, in terms of its demographics, holds huge potential for businesses looking to target the country’s massive population of roughly 170m people, the country is still not as advanced as South Africa.

“Three things create wealth in successful economies – obviously considering clean, effective government as a given… its innovation, its productivity and its technology… And I don’t see really any of the three coming out of Nigeria at all. It’s purely a numbers game. Fast moving consumer goods facing numbers game. That is it.”

He explained that he thinks GDP measures are largely meaningless when measuring an economy’s success, as it does not reflect value addition, job creation or innovation.

“Let me give you an example. Indonesia’s economy is significantly bigger than Singapore’s, but which is the more successful country? Which country has massive amounts of technology, attracts talent, is a massive innovator, has an absolutely clean government, incredible efficiency, and is a fantastic, unbelievable state to live in? Singapore. None of it applies to Indonesia, but which is the bigger economy? Indonesia, because it has 240m-250m people. Singapore’s population is about 2% of that,” Davies said.

“So which is more successful? If you are looking at a numbers game, Indonesia is significantly more successful than Singapore… [but] that is not how you measure the success of a country or an economy.”

He noted that a big deal has been made over Nigeria’s new GDP figures, and this could actually distract from prominent issues that need to be addressed, such as government corruption and recent allegations that $20bn of oil revenue has not been accounted for.

“It’s true the rebasing of the [Nigerian] GDP has been delayed, delayed and delayed. The previous deadline was December, and then it was February. And now it’s been put out literally three and a half weeks before the World Economic Forum in Abuja.”

Will South Africa remain the gateway to Africa?

“For businesses there are fantastic opportunities [in Nigeria] but looking through a deeper developmental, more analytical lens, there is a much more complex suitcase to unpack here,” Davies commented.

According to Lullu Krugel, senior economist and associate director for KPMG, South Africa is still superior in terms of infrastructure and business support services, making it a more attractive country in which multinational businesses can locate their Africa head offices. While Nigeria might be the market a particular company wants to target, its unreliable power supply and high rental costs can make operating head offices in the country both expensive and frustrating, for example.

“Then other things that are important are to what extent your right as an investor is being protected in a particular country and the structure of the financial services, if you need to make payments to foreign entities and so on,” Krugel told How we made it in Africa.

“And specifically if you look at the financial services industry, South Africa ranks among the top in the world. So that definitely does count.”

While many of the first mover opportunities exist north of the South African border, especially within the consumer market, Krugel said it would be simplistic to say that Nigeria has taken over South Africa’s position as the gateway to Africa just because it is now calculated to have a larger GDP.

“Yes, GDP and the size of GDP of course is always something that is thrown around. There is a big thing being made that China [will overtake] the US as well but it doesn’t mean that people still don’t recognise that there is still fantastic investment opportunity in the US and it is a huge market that you can’t ignore. So I think it’s a factor but it’s definitely a simplistic view if you look at it really on a micro level like company investment. Other factors over and above GDP very often play a much bigger role in a company’s investment decision,” emphasised Krugel.