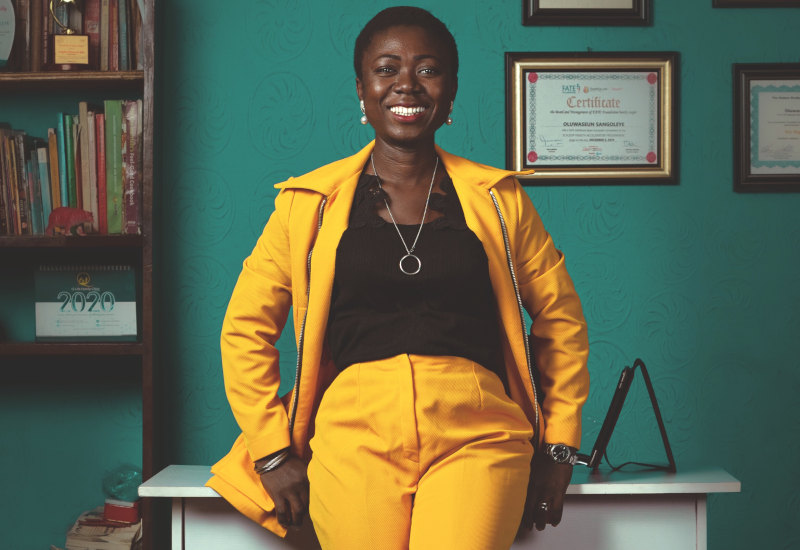 Feeding babies and toddlers isn’t child’s play, but Nigerian entrepreneur Seun Sangoleye discovered this only once she had her own. “I had no idea what to feed my son, besides formula [milk],” she says. It felt like nobody she knew could help.

That was eight years ago. Since then, Sangoleye has been building a children’s meal solution company, called Baby Grubz, which offers food products and information in the form of meal plans, recipes and advice.

Lagos-based Baby Grubz’ range of food items comprises fine dried fruit and vegetables that can be reconstituted and eaten as a porridge or used in mixtures for foods like pancakes and muffins.

Sangoleye scoured online communities on child nutrition and started making purees that contained fruit, veggies and bespoke cereal. There was a big demand from other mothers. On 1 April 2012, she sent out a broadcast message on her mobile phone and invited the first orders.

Without any start-up capital, Sangoleye had to approach her customers for advances and promised to deliver the orders within three days. With these advances, she bought fruit and vegetables from the local grocery market, made the meals and delivered them. In the first three years, the business had no freezer and made do with cooler boxes and ice to keep the meals fresh. “We were a struggling family, so I had to be resourceful,” she says.

Word-of-mouth referrals and social media helped grow the client base.

A visit to her grandparents for the Christmas holidays, without the food processors, inspired her to start experimenting with dried food for her son. However, when he developed rickets from a deficiency in vitamin D and calcium, a more scientific approach had to be found. According to Sangoleye, nutritious meals recommended by the dietician were “bland and yucky”, so she googled and replaced the recommendations with tastier food that had the same nutritional profile. “At the end of the three months, my son was much healthier.”

Sangoleye also found a mentor at Nutrition International, a food NGO, who told her the products should complement what the government and the World Health Organisation were doing. “We needed statistics to see what children are lacking in and what they are suffering from; I realised so many other children had deficiencies.

“Baby Grubz could have been an NGO, I’m so passionate about feeding children,” she adds. “Malnutrition in Nigeria and Africa as a whole is close to my heart.”

It took her a year to completely pivot to the dried baby food business. The focus also changed to children from six months to two years, instead of up to five. “We realised there’s a definite need in the younger infants. Older infants have a variety of foods,” she explains and a good nutritional foundation is more important in the earlier years.

Her husband encouraged her to expand; not only to help others but also herself. 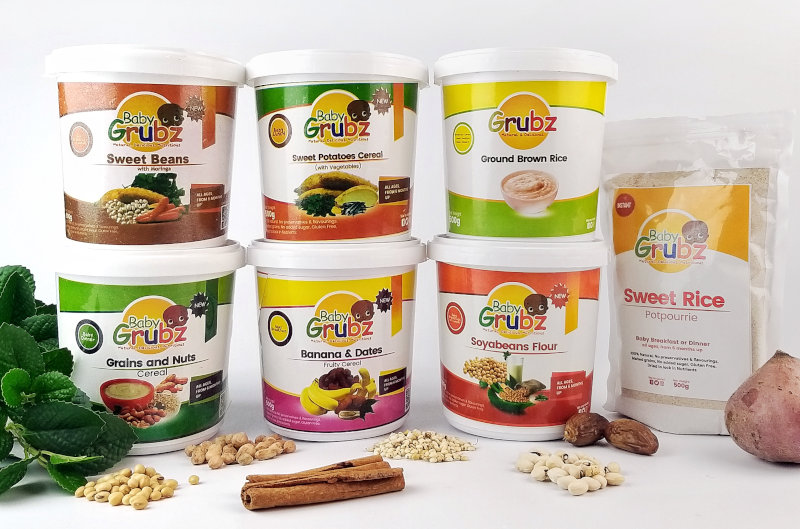 A selection of Baby Grubz products.

For that first year, Sangoleye worked alone but later had to hire part-time help for the cleaning and processing of the fruit and vegetables. She still did all the cooking.

In the second month of business, she bought a laptop with the family’s savings – the money they had saved for their rent for the year – and wrote a recipe book overnight. She sold it in PDF form. The book sold so well that the laptop paid for itself in two days. “The food was giving us 20% of the revenue; the other 80% was from recipe books and meal plans,” Sangoleye says.

A major turning point was in 2016 when the business hit a rough patch and had to be reassessed. Instead of targeting high-end customers who had strayed because Baby Grubz wasn’t “bougie” enough for them, the company started focusing on middle-income earners.

“I took a couple of lessons on customer profiling. It was profound.” The trick is to focus on pleasing just one customer with a profile representative of one’s entire customer base. “We know how much [this customer] makes, where she hangs out, what her disposable income is and what her favourite TV show is.”

Baby Grubz products sell for 1,500 naira (almost $4) for a 500g container – which can last up to a month if used to supplement family meals – or 10,200 naira ($26) for a starter kit that includes a variety of product flavours. There is ground brown rice, bananas and date cereal, sweet potato cereal, and soya bean flour.

The marketing is fairly low-key, partly because the company is already selling everything it produces. “We would shoot ourselves in the leg if we market more when we don’t have more products to sell.”

Sangoleye established herself on online forums as a “mini-authority” on baby food and word spread from there. Her social media channels reach about 350,000 women and the viral content extends to even more. Before the Covid-19 lockdown, there were also tasting parties where mothers could sample the product.

Getting supplies from the farms

When Baby Grubz became too big to rely on market produce, Sangoleye identified entrepreneurs in remote areas close to farms who could source the raw materials like sweet potatoes, bananas, soya beans and groundnuts. “We have aggregators in Nigeria but sometimes they make their raw materials unusually expensive,” she explains. Smaller operators find engaging with farmers directly is difficult and their yields are inconsistent.

The local entrepreneurs “aggregate on our behalf, and process on our behalf”. This involves drying the product, which makes it easier to transport. “It’s a win-win for us because we do not have enough equipment to process the way we want.” The procurers on the ground know how to source the cheapest and best quality raw materials, according to her. 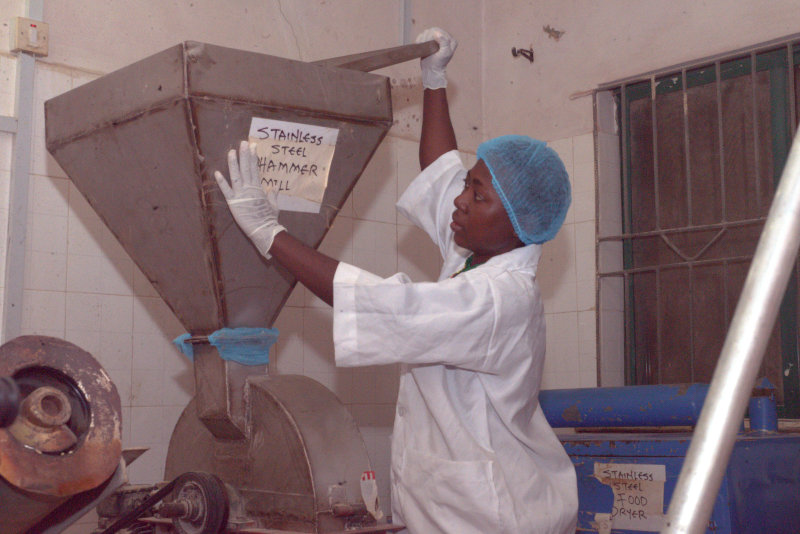 An employee at Baby Grubz’ facility.

Women doing it for themselves

Sangoleye has a network of about 165 women who, directly or indirectly, distribute her products and supply around 280 supermarkets that stock Baby Grubz. The product is also available in other countries in West Africa and the United Kingdom.

Distributors pay in advance of delivery. “This is how we initially raised funds and it is still the primary way we do it.” It’s a symbiotic relationship because as the women grow their businesses, Baby Grubz also grows.

A lot of the profit goes back into growing the business. “We are closing a deal on the purchase of a facility. I raised the funds by taking some money from the bank, some working capital and I told all the women to pay for next month’s supply.”

Being risk-averse, it is the first time the business is taking on debt. “I had to wait for our cash flow to be strong enough. It’s not that the money isn’t coming in but we have a lot tied up in capital assets.”

The next milestone is to get to a level where she can invite investors and become a medium-scale business – hopefully by mid-2021 – and to produce more than the current five to six tonnes every month. “We want to meet all our targets, then we will be able to enter into a conversation from a point of strength and select the type of investor who we want.”

It’s now less about what she likes and more about the customer, whose tastes sometimes differ from hers. “We now give them what they want. Removing myself from the equation was the key to our growth.”

Taking on the competition

There are a few players in Nigeria’s baby food industry; yet, they all struggle to produce enough for the sizeable market.

Although imported baby food still makes up 80% to 90% of the market, five local baby food companies – which concentrate on organic, natural foods – could feature in the top 10 soon, of which Baby Grubz will be one. “There is a lot of awareness in terms of better nutrition, better living, wellness. It’s a growing culture. People want to live better. Everyone wants to eat clean.”

If she could do it all over again, with hindsight, Sangoleye believes she would be more confident, make bolder decisions and take bigger risks. “My risk appetite would definitely increase. I would trust myself more; trust my instincts.”