In further moves to deepen its financial markets, Reuters reports that Nigeria’s stock exchange plans to create an index for fixed income securities by the end of the second quarter. 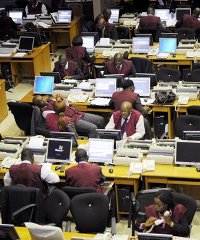 Analysts say an index will help encourage more active trading in the bond market and could improve transparency in the pricing of debt instruments in Nigeria. Interim Administrator Emmanuel Ikazoboh said in an interview as part of the Reuters Africa Investment Summit that he was working to encourage the listing of government bonds, which are currently largely traded over-the-counter and expects more of Nigeria’s 36 states to issue bonds in the coming months to finance infrastructure.

“We are trying to encourage even the local governments to raise municipal bonds. By raising bonds and money from the capital markets you are forced to repay those and be transparent,” Ikazoboh said. Earlier this year, Nigeria’s “bad bank” AMCON said it would list its bonds on the exchange and create hedging opportunities by allowing short selling.

The exchange will also look to widen its trading day for a second time to seven hours – from 9:30 am to 4:30 pm – in the next two months to try attract more foreign investors, particularly from the United States, Ikazoboh said. The exchange had in December 2010 extended its trading day by two hours in December to try and boost liquidity. The exchange says volumes rose by a quarter and the value of deals by 15% in the first two months after that move.

That of course is not the only variable that determines increased market activity, but it in all likelihood would have contributed to the increase. He said the bourse was also looking at removing a 5% cap on individual share price movements, which he said was keeping a lid on volumes. Ikazoboh also said he expected a few new listings with initial public share offers (IPOs) in the second half of the year, after Nigeria’s elections, but that more would start “trickling in” in 2012.

Uganda, whose exchange was the top performer in Africa last year, struggles from a liquidity perspective, with just US$18.4 million worth of stock having traded in 2010. To try and improve this, it has moved from its previous three days a week trading cycle to trading five days effective Monday this week, although the trading hours have remained unchanged.