The Democratic Republic of Congo (DRC), Central African Republic and Niger have been identified as African markets that will provide attractive returns on investments in shopping mall developments, but are inaccessible due to political or economic barriers to entry. 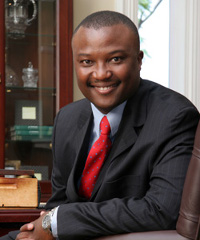 Kura Chihota is the CEO of Ascendant Property Fund, an unlisted commercial property fund in Zimbabwe.

This is according to Craig Lyons, director of Novare Equity Partners, a private equity fund manager focused on investment in sub-Saharan Africa, at this week’s Africa Property Investment Summit in Johannesburg, South Africa.

Lyons said for the last two years the DRC, Central African Republic and Niger have revealed good opportunities for retail developments which have caught the interest of Novare.

In addition, Lyons said they had met some of the best local partners Novare has come across in those markets. However, due to the political, economical and logistical environments in these countries, it is very difficult to execute development projects.

The World Bank’s Doing Business 2013 report ranks the DRC 181 out of 185 countries in terms of ease of doing business. Niger is at 176 and the Central African Republic is ranked last. All three countries ranked poorly in the Wold Bank’s assessment categories of dealing with construction permits, getting electricity, trading across borders, enforcing contracts, protecting investors and resolving solvency.

Despite the political and economic insecurity, these countries still display large expanding populations, urbanisation and opportunities for formal retail.

However, Lyons pointed out that there are a number of Indian and Chinese-led consortiums which are showing an interest in these markets. “And it’s going to be fascinating to see actually how they build, what materials they use, and their allocation of capital, because to raise debt funding is a massive challenge.

“We are actually seeing a project at the moment in Lubumbashi (DRC), which is going to be 100% financed by the Chinese and they are going to build the thing from scratch, and they are throwing serious numbers at it, taking the view they will control Lubumbashi in a few years time,” he said. “I think that is one of our biggest challenges: that we don’t have the risk appetite that maybe our colleagues from the East have, in terms of allocation of capital and the preparedness to actually have 20%-30% vacant.”

Lyons said Novare cannot have a shopping centre that is 10% vacant, but the Chinese are prepared to do it because they are taking at least a 20-year investment view while Novare is taking a 10-year view.

Zimbabwe: A wait and see game

According to CEO of Sanlam Properties Thomas Reilly, Zimbabwe can also be added to the list of African markets that could offer huge returns in retail property investment but is inaccessible due to economic and political barriers.

“You know, we had a number of people we were speaking to that were looking at schemes in Zimbabwe and some of them still are, but retailers were lined up to a large extent and tenants in general, but [they] got turned off,” said Reilly. “The elections didn’t go the way it was expected, I guess.”

Kura Chihota, CEO of Ascendant Property Fund in Zimbabwe, told How we made it in Africa that there is still political uncertainty after the July national elections.

“We have had an uneasy government of national unity, and that has now come to an end. The Zanu-PF party now has [over two-thirds] majority and we await the announcement of a cabinet and policies and people to implement those policies,” said Chihota.

He added that depending on whether there is an alignment between what is said, what is needed, and what is actually done in Zimbabwe, business confidence in the market will either rise or fall. For many property investors and developers, explained Chihota, the market is a wait-and-see environment which can be problematic in the sector.

“Buying or developing a property asset is not a decision you make in two minutes – its implications are not something that will last for a year or two. We are building capital assets with a 20-year life cycle, so we need certainty as early as possible.”

Chihota added that property investors in Zimbabwe are looking to hang their hats on legislation and pronouncements on a policy position, not comments made at a political rally.