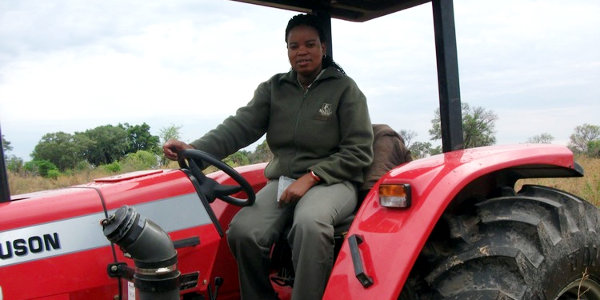 Run a quick Google search on African women making it in business, and you will rarely find a young woman engaged in rural farming. But Mavis Nduchwa has challenged norms by founding and successfully managing a commercial animal feed farm in Botswana.

Thirty-three-year-old Nduchwa, who was born on a farm in rural Francistown in eastern Botswana, near the border with Zimbabwe, developed an interest in agriculture at an early age. However, as she grew older, the allure of city life drove her to earn a degree in real estate and hospitality management. She later worked as a journalist.

But given the high cost of agricultural inputs strangling her farming community, Nduchwa sensed that affordable, locally produced animal feed as a substitute for the expensive imported kind, could boost the agribusiness sector. She quit her job in the hospitality industry and teamed up with her husband Brighton Chabana to found Chabana Farms in 2011.

Six years later, Chabana Farms has become a successful agribusiness enterprise. Nduchwa believes that women, when empowered, can achieve as much as men do. “We are all humans and thus should be given equal opportunities,” she told Africa Renewal, noting that the future of Africa lies in agribusiness, which must be championed by the youth.

“It is important to make agriculture ‘cool’ in order to attract more youngsters to the sector,” she says.

How “cool” it can become will depend on how profitable the agribusiness sector is and the needs it is able to meet. Chabana Farms occupies 247 acres, and grows grains and legumes such as lablab (a legume that produces high-quality forage for livestock), maize, sunflower, sorghum, beans and groundnuts.

Because Botswana is largely semi-arid, cultivation takes place during the rainy season, between October and April. The scarcity of grains between May and September – the dry season – makes it difficult to meet the commercial demand.

In a good rainy season, Chabana Farms can take in up to $1.5m in profits.

Beyond its day-to-day operations, the farm, which employs 10 full-time staff, also provides six weeks’ training in managing a poultry business for unemployed single mothers. Those who receive the training are able to start their own businesses.

Nduchwa says formal education has been one of her keys to success. Her degree in hospitality management equipped her with the skills needed to jump-start her agribusiness and afforded her the credibility to seek and receive funding. In 2015 she was accepted to the Tony Elumelu Entrepreneurship Programme (TEEP), the $100m flagship entrepreneurship programme of the Nigerian billionaire’s Tony Elumelu Foundation. The foundation aims to support businesses that can contribute over a 10-year period to creating about a million new jobs and generating at least $10bn in revenue across Africa.

TEEP entrepreneurs take part in a nine-month training programme that includes a 12-week online business plan, development training and mentoring programme, followed by a two-day boot camp. After successfully completing a business plan, each entrepreneur receives a seed capital investment of $5,000. This investment does not have to be repaid. The entrepreneurs are also entitled to a second round of funding, structured as a loan of $5,000 or the equivalent in equity.

Chabana Farms also produces poultry and eggs, a branch of business that employs women in Francistown and beyond. Educating and employing women in neighbouring towns and villages allows Nduchwa to expand her business far beyond Francistown: “Our primary markets include surrounding villages, to which we sell staples like maize, beans, eggs and the like,” she says.

Nduchwa says that women entrepreneurs face unique challenges: a lack of access to land, and government policies she describes as patriarchal because traditionally land is owned by men.

Another challenge is that people generally deride agriculture, particularly animal husbandry. She recommends policies that shift the perception of agriculture from “uncool” to “cool.” She adds that youth education curricula should be restructured to make it relevant to the current job market and to promote agriculture, as this is the bedrock of economic growth in Africa.

To achieve the second Sustainable Development Goal (SDG 2), which is to end hunger, Nduchwa adds that an agripreneur (an agriculture entrepreneur) needs “ease of access to financing and subsidies, as this would solve most of the problems we currently face”.

Reflecting on her own experience and outlook on women’s empowerment, she says, “There is no special career for a man; it’s not a man’s world. The future of Africa is in our [women’s] hands.”

Nduchwa believes the future is bright for agribusiness in Botswana. Her venture continues to employ women, while her training projects equip farmers in neighbouring villages with the skills and resources to expand other sectors of agribusiness.