According to Dinesh Kotecha, Bavaria Auto director, the new model is exclusively available in Kenya at the Nairobi outlet and would be supplied to interested clients in the East African region. 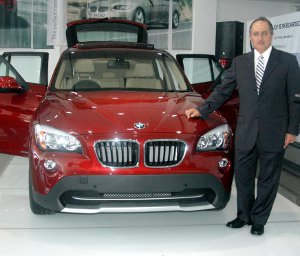 Adili Popat, chief executive officer of Bavaria Auto, next to the new 2010 BMW X1 series launched at the Nairobi showroom in Kenya yesterday.

“We have already received six orders from interested clients and we expect the model to be accepted in the market and surpass our targets,” said Kotecha.

Bavaria Auto also announced that it has invested a further Ksh120 million ($1.5 million) in sales, service improvement and customer care at its Nairobi outlet to meet international technical standards.