South Africa-based Nampak Bevcan recently opened a US$160 million beverage can factory in Angola. How we made it in Africa discussed the investment with Erik Smuts, MD of Bevcan. 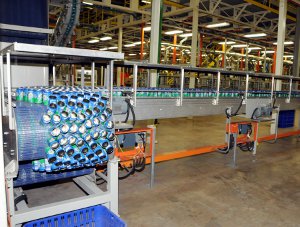 Sprite cans on a conveyer belt at Bevcan's manufacturing plant in Angola.

Why did Bevcan decide to open the Angola facility?

We’ve been doing exports to Angola from South Africa from the early 2000s. The volumes were growing and in 2004 we had an engagement with the Angolan government. They asked us whether we want to invest into Angola and actually put up a can line there. At the time we thought it was maybe still a bit risky. We were looking at the political risk. Angola just came out of a civil war. We did a feasibility study again about two years later in 2006 and then we decided that the opportunity is there. The political situation looked better. But one of the main reasons for investing in Angola was really the size of the market. The market was growing at speed. It was literally a matter of saying, if we go in there, we already have a developed market and virtually we can sell every can we can make. Because we were already doing a lot of cans in there, if we did not build the facility, we potentially would have lost the entire market. After we decided to invest, Coca-Cola put out the volumes on to a tender process. So although we decided to invest in Angola, we actually had to compete in a tender process to win back the volumes that we were already supplying.

So Coca-Cola was specifically looking for someone to manufacture its cans locally?

Correct. At the time there was a massive problem in Angola. You had a very congested port, which is still the case to a large extent. The lead times of getting products into Africa, generally requires massive stockholdings from our customer base. And operationally, although Coca-Cola might be focusing on filling product and distributing it, they actually have to spend a significant amount of their time on the inbound logistics. So they would typically have a massive logistics department to manage that, where in a developed country you won’t have that. By actually getting us to invest in a local manufacturing facility that removed that logistical nightmare from them.

Cuca BGI and Coca-Cola Bottling Luanda are currently Bevcan’s main clients in Angola. Was the facility exclusively built for these clients? Or are you also looking at landing other contracts?

How would you describe Angola’s manufacturing sector in general?

It is in its infancy. Angola historically has been more based on assembly, where you might have imported components assembled in the country. From what I know we are probably one of the first that started investing into serious manufacturing. The infrastructure at the moment is not supporting that yet. To give you an example, the site where we are at the Viana Industrial Zone, just outside Luanda, is an industrial area, but the infrastructure is very limited. Although there is electricity, the stability of the national grid there is not good enough yet to support manufacturing. We generate all our own electricity. We use up to 30,000 litres of diesel a day to keep that factory going. We would love to use the national grid, but our processes require extremely stable electricity supply. At the moment we are completely reliant to generate that ourselves. The same goes for water. There is no piped water to where we are. We do also use quite a bit of water in our process and we bring that in with tankers every day. So the manufacturing sector as such is definitely starting to grow, but it really is still in its infancy.

What is your advice to other foreign investors looking to do business in Angola?

The first thing is: be patient. If I can give three words of advice it would be: patience, patience, patience. It is a very bureaucratic society. There are many rules. I think a lot of people might think in Africa there are no laws. That is definitely not the case. There are a lot of regulations and things that you need to comply to in Angola, and a lot of red-tape. To get through that can take a very long time. Do not take short-cuts. There will be that temptation to start doing things without getting all the approvals. That would be a critical mistake. It is well known that our investment took a very long time, we had massive delays in the project, and that was all as a result of waiting for all the approvals to happen. It cost us a lot of money to sit and wait. But at the same time we know that if we elected to try and take short-cuts it certainly would have compromised our investment in the long-term. I believe in the end it is going to be worth the wait.