For the past 10 years, the Kenyan government had forbidden any external painting on Nairobi’s shared taxis – matatus – other than a standard yellow stripe. 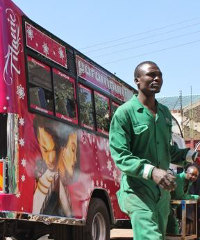 A recent creation by Peter Kanyallu, also known as Nyash, is a matatu dedicated to the movie Titanic. Photo by Hilary Heuler.

But the Kenyan president has recently given the green light to lifting the ban on matatu art and the battle has begun among drivers to have the best moving graffiti.

Peter Kanyallu, also known as Nyash, grew up in Nairobi’s slums as a graffiti artist – tagging walls with spray paint.

Nyash is now 29, but says he never outgrew his passion for urban art. However, these days he gets paid to paint, and his audience, if anything, is even broader.

Nyash paints matatus, which are either minibuses or full-sized buses. His most recent works include a bright pink bus devoted to the movie Titanic, and a Puma-themed vehicle that calls to mind a giant sneaker.

“What we look for, it’s the trending things, like movies, musicians and so on. Sometimes we draw pictures of 50 Cent, because guys out there like 50 Cent. A customer may come and say, ‘I want mine to have a logo of Puma, Facebook, Adidas’ and so on, because it’s what he likes,” he says.

Nairobi’s matatus were once famous – or infamous – for their wild driving, loud music and equally loud decor. Many were also run by criminal cartels.

In 2004, matatu art was banned as part of a government attempt to tame the industry. The driving skills did not improve much, and the cartels have proven difficult to squash. But the vehicles certainly got plainer – until now.

Kenyan President Uhuru Kenyatta has recently agreed to lift the ban on matatu decoration, and a battle to out-paint one another quickly developed.

There are more than 10,000 matatus in Nairobi alone. Today, more and more of the vehicles sport pictures of celebrities, along with words like “nuclear”, “hurricane” and “repent”. Others are more cryptic; one says simply “appetiser undecided”.

Nyash says owners pay up to US$1,000 for his art. But they do it, he explains, because the more colorful a matatu is, the more customers it attracts.

“Owners really enjoy those matatus. It’s like a competition. The most decorated, you always find them on top,” he says.

The CEO of the Matatu Owners Association, Kanoru Wambugu, says whatever appeals to the youth is good for business.

“Young people want to get associated with matatus,” Wambugu says. “The students, the young people and the people in the lower classes do not own cars, and therefore they are going to use them. That’s our target.”

Plus, he says, decorated matatus give young artists like Nyash the rare chance to make some money for their skills.

“That’s what we want, those young people to draw. The moment they design those vehicles they are getting their upkeep, and you are going to reduce crime,” Wambugu says.

He adds the matatu industry is better regulated these days than it used to be. He is even crafting a set of graffiti guidelines, he says, to make sure that the painting does not get out of hand.

Nyash says he is doing his best to stick to the new rules, and encourages his colleagues to do the same. But, he admits, some still bow to temptation, decorating their vehicles with illegal tinted windows and flashing lights.

After all, he says, they just look nice. And with over 10,000 moving canvases in Nairobi, who can resist? – VOA