“I am more interested in being a small fish in an ocean than being a big fish in a small pond,” says Kenyan entrepreneur Maureen Murunga. 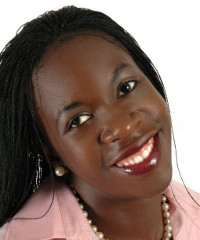 A former banker, Murunga is the founder and CEO of Neo Amadiva, a high-end salon chain based in Nairobi. Earlier this year Dutch-based private equity fund TBL Mirror Fund bought a minority stake in the chain for an undisclosed amount. This first-of-a-kind deal in the Kenyan market demonstrates the increasing investor interest in consumer driven businesses.

Murunga says welcoming new investors into her business “was a no-brainer”, adding that the combination of cash injection and expertise will help her to scale her business much faster.

“I think I will be making a much more interesting return [in the future] than if I hang on to the full ownership of the company.”

Murunga previously worked with Barclays Bank in Johannesburg, but quit her job to pursue her passion for beauty. She tells How we made it in Africa that watching the documentary Good Hair produced by US comedian Chris Rock helped her to realise the opportunities in the hair care industry.

“What I noticed was the amount of money we spend on hair. I also noticed that black people were mostly consumers but were rarely involved in the creative side, sourcing, manufacturing and selling of products. It is bizarre. I did research and looked at other parts of the world and it was the same trend. I figured because I loved beauty anyway, it made sense to invest in the industry.”

In 2010 Murunga bought an existing salon chain and rebranded it to Neo Amadiva in the hope that starting with a salon business would give her the insight and learnings needed to venture into something bigger.

“My vision is eventually to get to the top of the food chain. I am very interested in manufacturing, be it hair or skin care products. Manufacturing is very capital intensive and I did not have the finances that would allow me to start from there. So I decided to start from the bottom to gain market experience. My interactions with customers will eventually translate into products consumers want.”

After four years of running the business and despite the difficulties she has faced, Murunga says “the rewards have been immense”.

“When you become an entrepreneur you have to be prepared for the inevitable which is nothing is guaranteed. It’s a big risk but I have a vision and I am very passionate about it. This is not something I am willing to give up on. It is something I have to pursue or at least die trying.

“The product is really affordable… [but] it is high quality services offered in a space that has good ambiance. The people I am really looking at is the generation Y. They are young enough to experiment, they are still trying to find out what fits and they are not committed to any brands yet.

“This business is about people,” says Murunga.

Murunga’s vision is to own and operate 10 stores by 2016. The bigger vision, she says, is to have up to 200 franchise branded stores in urban areas across East Africa. She explains that it is achievable to have some 70 franchise stores within the next seven years.

She notes that TBL Mirror’s technical expertise will come in handy in executing her ambitious expansion plan. TBL has brought in Peta Klaassen, the former CE of Wave, a franchise salon store with 200 branches across Belgium, Netherlands and Luxembourg, to help Neo Amadiva in product development.

Murunga reiterates that her ambitious expansion is achievable, noting that when she quit her job she didn’t plan to “sit around and run one salon for the rest of my life”.

“I wouldn’t be doing this if it was not a scalable business. I would not leave my job to go set up one shop. As Africans we need to get over the fear of dreaming big. We should believe that a small venture can turn into something really big. Java [House] started with one coffee shop. Who would have thought that 14 years later they would be in every mall in Kenya? It is because they were not building a coffee shop, they were building a brand.”

Murunga advises other entrepreneurs in Africa to dream big, be resilient and consistent and keep an open mind. She notes that “being an entrepreneur is volatile” and one has to be “prepared for a lot of no’s but they should not give up knocking”.

“I think the biggest thing is you have to be very clear on your vision and define it. Some entrepreneurs waver a lot. They are so worried about making ends meet that they will change their concept to fit whatever comes their way. You have to stand firm in your dream because you are the biggest advocate of your dream. I have to add though, that you should not be too arrogant not to listen to other people or read the market. Sometimes you can be completely off the mark.”