Kenya’s transport system is infamous for chaos, corruption and carnage on the roads. The majority of the population use the country’s thousands of minibus taxis, locally known as matatus. Although the $2bn-turnover industry is lucrative, vehicle owners lament they lose up to 30% of their earnings daily. 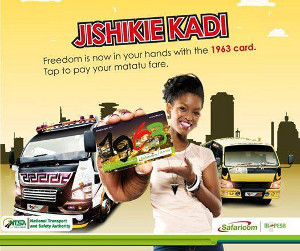 An advertisement for the My1963 card.

Pilferage of money collected from passengers robs not only investors but also government of millions of dollars in taxes.

Several card payment options have been launched in an attempt to build a cashless transport system. Technology firm Fibre Space introduced the ‘My1963’ card which enables passengers to load money from popular mobile banking platform M-Pesa, and pay their fare without using cash.

“If you are an investor, you spend about US$50,000 to have a bus on the road. Every stop you make at a bus stage you lose money to cartels, bribes to police and to ‘stage boys’ who help fill the bus. Your crew also steals money from you. With a cashless system money reaches the investor in real time,” says Mwakio Ngale, co-founder and general manager of Fibre Space.

The company is currently working with 960 matatus and has signed an additional 5,000. Ngale says more than 100,000 commuters currently hold the My1963 card. The company has recruited 2,000 card activators stationed at key bus terminals to recruit passengers.

Ngale explains passengers are given cards free of charge and register using their national identification card, a valid phone number and date of birth information. Parents can also register cards for children under 18. Users are then able to load money through M-Pesa at no additional cost. The service uses near field communication (NFC) technology, hence cardholders only have to tap their cards against a terminal installed in matatus to pay their fare.

A number of banks, IT companies and bus companies have also launched competitor cards. For instance, the Kenya Bus Service (KBS) has unveiled the ‘Abiria’ card. US technology giant Goggle was first in the market with its ‘BebaPay’ cards, unveiled in 2011 in partnership with Equity Bank Group.

Ngale hopes to fight off competition by appealing to patriotic Kenyans. The card is aptly named after the year Kenyan gained independence and bares the colours of the Kenyan flag. The My1963 card also allows users to borrow small amounts of money for fare payments and they can also collect bonus points that can be redeemed for free rides.

In the long-term, Ngale says the card will be used for diverse purposes such as making purchases and settling other bills.

‘Some level of madness’ helps

But he has learnt that dealing with players in the industry requires patience.

Last year the government introduced legislation and set a deadline for July when all public service vehicles were to operate a cashless fare system or face punitive action. This deadline was extended to last December but has not been enforced. Some matatus are hesitant because they have to make an investment by acquiring terminals that cost about $300.

“I have 900,000 cards I hope to have in people’s hands. It will take time, but I’ve noticed customers become interested once they learn the benefits,” says Ngale.