Close to 70% of the world’s active mobile money customers are in sub-Saharan Africa, according to Aaron Oliver, head of emerging payments for Middle East and Africa at MasterCard. 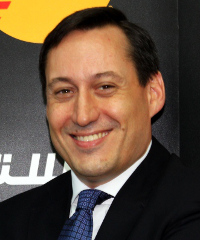 Aaron Oliver, head of emerging payments for Middle East and Africa at MasterCard

“Mobile money has moved from this ‘new thing’ into an industry and really the heart of that industry is in sub-Saharan Africa,” Oliver told How we made it in Africa.

“Some of the stats that we have… there are 61m active mobile money customers [globally]… and 42m of those are in sub-Saharan Africa.”

He added that 52% of the world’s mobile money services are in sub-Saharan Africa and there are nine countries in the region that have more people with mobile money accounts than bank accounts.

Mobile money is a financial transaction service where money can be paid or transferred electronically via mobile phones, and has become popular among many of Africa’s unbanked population.

“We are also seeing some great knock-on effects from mobile money, and that is the rise of bank accounts as well,” continued Oliver. “So not only is mobile money this new financial services instrument that consumers want to be able to get their hands on because they see use and value in it, but then by interacting and engaging in financial services they then start to find value in other services that the banks were already traditionally providing. So I think it’s quite an exciting time for mobile money.”

However, while the great bulk of the world’s active mobile money users are in sub-Saharan Africa, Oliver explained that the 42m active users who have made use of the industry’s services in the past three months, translates into only 16% of the population.

“Where mobile money was eight years ago; that is amazing. But imagine how much more there is to grow.”

Oliver added that as mobile money starts to gain more traction and cheaper smartphones are manufactured, mobile money services will be better refined.

However, in Egypt, “mobile money 2.0” has been introduced which Oliver said can be described as the next version of the service.

“In Egypt what we have done is we have started with interoperability at the heart of it, and that is a new way to put the systems together, ensure that the pricing rules are in play so that any agent that you go to you can cash in for any service. For any service that you use, you can transfer and interact with those that are on the other services, and the rules and the protections that are there allow those customers to make those transactions transparently while it also helps the businesses to be able to settle and reconcile those transactions.

“So really in Egypt, what we are seeing is that next version of mobile money which then brings [users] closer to the other financial service players that are in the market and you start to really see customers getting the benefit of that.”

Oliver thinks the next big step for mobile money will be merchant payments, with an estimated 85% of retail transactions still being conducted with cash on the continent today.

“Right now mobile money for the most part is used for cash in and cash out, person to person. Merchant transactions are the next big opportunity that this industry really has to work together to figure out,” he highlighted.