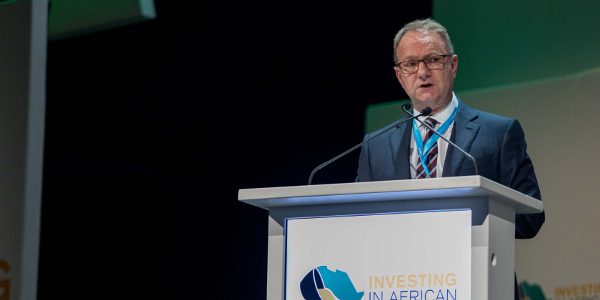 Anglo American’s CEO Mark Cutifani speaking at 2017 Investing in African Mining Indaba. Anglo American was the top performing share in the FTSE 100 in 2016, compared to being the worst just a year prior.

On Monday, Anglo American’s CEO Mark Cutifani addressed an audience in Cape Town at the start of the 2017 Investing in African Mining Indaba, saying: “We as an industry drive 45% of the world’s economic activity… The discussions we have and what we talk about, everyone should take notice.”

There is no doubt the mining industry plays a significant role in the global economy, but there is no continent where it has a bigger overall impact than in Africa. During times of high commodity prices, Africa’s mineral-rich countries benefit from an injection of economic activity that seeps into all sectors of the economy.

But when prices are suppressed – as recently seen – African economies feel it first. The commodity price slump in the last three years saw many miners lay off thousands of workers, dispose of assets and close unprofitable mines. With less revenue earned from commodity exports, African current account deficits grew considerably, causing local currencies to depreciate and consumers to struggle. In just a few years, the narrative surrounding Africa changed from one of hopefulness to gloom.

However, the last six months have seen some commodities make a comeback. The copper, lead and tin prices all increased around 20% in the last half of 2016, while the price of  iron ore is up near 100% since January last year. Furthermore, the World Bank forecasts strong gains for industrial commodities in 2017.

This newfound optimism can also be felt at this week’s African Mining Indaba – especially when compared to 2016’s somewhat depressing event, which was held at a time when prices were at their lowest. Attendance is up (65% for investors and 50% for mining companies), there have been less sound and technical problems, and even the food seems to taste better (we were served our choice of ice-cream in cones at dessert today). The whole event feels like it has been organised on a bigger budget and is representative of a feeling of hope for the industry.

Companies are also showing some positive signs of recovery. Rio Tinto announced today a 12% increase in annual earnings and said it plans to buy back US$500m of its shares following the recovery in commodity prices. Randgold Resources, which reported a 38% year-on-year increase in profits on Monday, has proposed a whopping 52% increase in its dividend. And Anglo American managed a miraculous turnaround into the top performing share in the FTSE 100 in 2016, compared to being the worst just a year prior.

As Carole Cable, partner at Brunswick noted: “It’s a big difference to last year when companies were standing on the ledge wondering if they should take one step off.”

However, Zambian economist and author, Dambisa Moyo warns of being too optimistic about a mining industry recovery this year and beyond, stating that the sector faces new challenges. These include a trend towards deglobalisation, slowing growth, and protectionist trade strategies by key markets such as the US. This will impact African commodity exporters going forward.

“According to the World Trade Organisation, trade growth has declined every year for the past 10 years, and we are continuing to see an increase in the number of protectionist policies led by the 20 largest economies around the world,” she noted during a keynote address on Monday.

“As we think of the trade balance between African countries and places like China and the Unites States, this is an important piece of the question that counties are going to have to grabble with – in terms of how it is that they are going to survive in an environment where there is deglobalisation and less opportunity to trade, particularly with commodities.”