Current market conditions are putting mining companies in a quandary – investing for the next stage of growth is potentially unpopular with investors but it could prove to be a masterstroke if they want to fully capture the next uplift in the cycle, says Lee Downham, EY Global Mining and Metals Transactions leader. 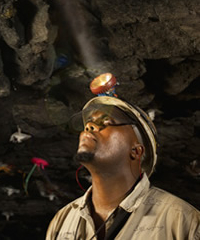 Releasing EY’s report, M&A and capital raising in mining and metals: 2014 trends, 2015 outlook, Downham  says “standing still is not an option” for the sector as it enters the latter stages of a global supply rebalancing and new competitors try to stake their position.

“Miners continue to wait out the bottom of the cycle. However, there is a window of opportunity for those with strong balance sheets to pick up assets as miners conduct portfolio reviews and offload non-core assets,” says EY Africa Mining and Metals Transactions leader, Quintin Hobbs.

Downham says, “Right now, there is no consensus on buy, build or return strategy.”

“The current focus on return on capital employed lends itself to short-term decision making, some of which has successfully instilled much-needed discipline across the industry. But given the cyclical characteristics of the sector, and the need to invest significant capital many years ahead of production and earnings, it isn’t the only lens that should be used.”

Hobbs agrees, saying this would be the opportune time to focus on long-term sustainability.

“Following the cost-reduction programmes internal capital allocation and productivity measures of the past few years, the really successful management teams will be those that have a broader focus on total shareholder return and take the necessary capital decisions today to support long-term value creation,” Hobbs says.

“This would also be an opportunity to invest in research and development, innovation and training of workers, as this will ultimately result in value creation.”

Buy, build or return: the case for buy

EY analysis of capital allocation trends of 30 of the largest listed mining companies in the period 2003-13 showed a clear underperformance by those companies that invested heavily in a “build” strategy over the time period, while “returners” outperformed, with “acquirers” not far behind.

Hobbs notes that acquisition options have often been taken off the table because of the significant impairments that have followed deals in recent years, and the stigma attached as a result. This combined with limited available funds and the wide valuation gaps are seeing companies hold on tightly to their capital.

“This overlooks the huge returns that some acquisitions created earlier in the cycle, and the short payback that a deal, if executed well, may generate overall compared to investing in a portfolio asset,” he says.

“However, the expectation is that deal activity will pick up over the next six to 18 months. There is a high likelihood of mergers as miners seek cost-savings on operations.”

2015 will be a turning point for private capital buying

Downham says 2015 will almost certainly be a turning point for the deployment of private capital in the sector.

“On the whole, sector-focused funds have patiently and conscientiously refrained from making significant investments in 2014, and this has proven to be the right strategy, given where share prices across the sector ended the year,” he says.

“But the compelling equity story underpinning the funds raised is perhaps stronger than ever given equity prices continue to soften across the sector.”

While near-term commodity fundamentals are not strong enough to entice the average investor, there are “a few shards of light at the end of the tunnel” for capital availability, according to Downham.

Hobbs concludes, “Completed portfolio reviews by miners should provide a pipeline of new opportunities for private equity investors. It is also reasonable to assume that the gradual positive effect of supply corrections and margin improvement across the producers will encourage investment demand for quality assets.”