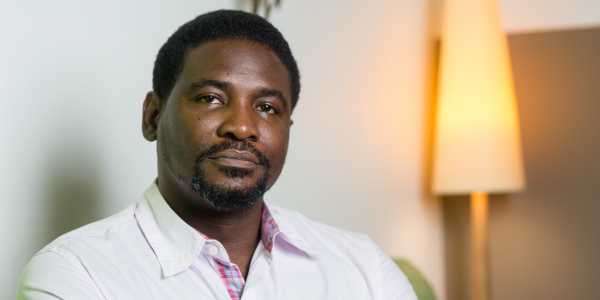 While Nigeria’s agriculture sector employs the majority of the population and has a large contribution towards GDP, its true potential has yet to be unlocked.

The UN’s International Fund for Agricultural Development (IFAD) estimates that only half of the country’s 71 million hectares of arable land is being cultivated, with irrigation on just 7% of irrigable land. And over the years local food production has not been able to keep up with population growth, resulting in rising food imports and prices. In fact, recent statistics reveal that Nigeria is spending ₦1.3tr ($6.5bn) annually importing food.

Part of the challenge is at least 80% of the country’s food is being produced by small-scale and subsistence farmers, who struggle to increase production. Most live in poverty and do not have the finances to improve farming yields through mechanisation. As a result they are forced to cultivate the land by hand and battle to move beyond subsistence.

It was knowledge of this that prompted Nigerian automobile designer Olufemi Odeleye to spend nearly 10 years developing the prototype for a low-cost, multipurpose, mini tractor – created with the Nigerian, and African, small-scale farmer in mind. His invention, dubbed the Tryctor, has been adapted from the traditional motorcycle and caught the attention of the Nigerian government which is currently piloting the solution among farmers. And this year Odeleye and his Tryctor are up for the Innovation Prize for Africa.

Make do with what you have

Odeleye spent years working for the automotive industry in the UK before returning to Nigeria with the hope of using his skills to benefit his home country.

“I identified the need to contribute to the number one Millennium Development Goal – to eradicate extreme hunger and poverty. I studied automobile design in the UK and on my return to Nigeria I started looking for ways in which I could contribute.”

His grandfather had been a farmer and Odeleye knew that unlocking the country’s agricultural potential could play a key role in eradicating poverty and hunger. Then, in 2004, he got the idea for the Tryctor while sitting in Nigerian traffic and watching hundreds of motorcycles zigzag around vehicles.

“It has always been my design philosophy that you should use things you have at your disposal to solve problems. So I saw the motorbikes and I thought I should be able to use them to do something… When I got home I immediately put pen to paper and did some sketches and modified a motorbike and about a month later I made a prototype, which was basically the first of seven prototypes,” he explained.

“And that is how I started. I saw that opportunity; it came to me in a light-bulb moment.”

The final solution is a three-wheel mini-tractor with tyres suitable for farming and a 30-horsepower engine that can be used as a generator. Alterations to a motorbike’s chassis and gearing system means it operates similarly to a traditional tractor, and it comes with various farming implements – a disc plough, harrow and trailer – which can be attached to improve production, supply markets and ultimate increase revenue. 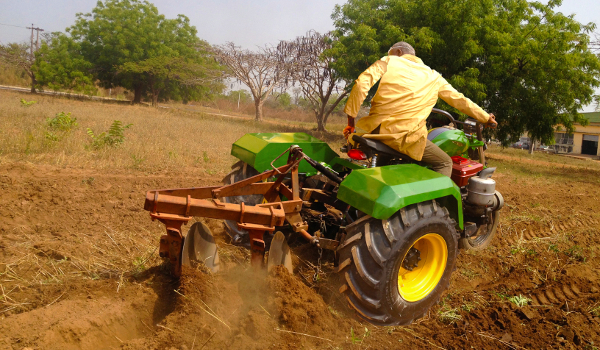 The Tryctor ploughing a field.

“A lot of crops go to waste – as much as 40% in some areas – and this is largely due to the fact that rural farmers don’t have access to the markets in nearby towns or storage facilities where they can take their grains to be stored for the next harvest,” explained Odeleye.

“The Tryctor can solve this because it comes with a trailer which can be attached to easily transport harvests from farms to storage facilities or nearby markets for sale.”

Furthermore, its engine can be used to power processing machines, such as those used for shelling maize, as well as irrigation pumps. “And it can also provide an alternative source of electricity so a farmer could always use it to power his home. It is a multipurpose tractor which brings value to the small-scale farmer in terms of increasing their income and improving their standards of living basically.”

According to Odeleye, traditional tractors in the market are priced around ₦4m (about $20,000) – and that is without including the cost of necessary farming implements. On the other hand the Tryctor, together with the three implements, is currently priced at ₦1.9m ($9,500). Maintenance costs are also lower as around 60% of its parts can be locally sourced.

But Odeleye highlights that this is still unaffordable to the majority of smallholder farmers.

“Even if it costs $2,000, the reality is that in Africa you don’t really get smallholder farmers who can afford that.”

However, he sees potential in implementing a renting model through partnerships with agricultural equipment companies and other organisations.

“We are also targeting farming cooperatives that normally have better buying power than single farmers,” he added.

“The whole idea is farming cooperatives can come together, buy maybe two or five, and share them among their members. They can then also rent it out to other farmers to generate income. So those are the routes which we are looking at.”

In 2013 the Nigerian government financed the first 10 to be manufactured and started testing them in the market seven months ago. “We should be concluding the pilot programme by the end of this year and then we can begin fully commercialising it.”

So what is Odeleye’s advice to others looking to bring innovative solutions to the African market? Follow your passion, use the resources and skills you have, and always remember there is more than one way of doing things.

“Look around you. If you genuinely have a desire to help Africa, then look at things relating to your field… or areas you are able to contribute to. There is always an alternative way to doing things and it might end up being simpler, easier and cheaper than conventional ways. So as long as you have that mindset you will be able to innovate. And if you have passion, it will drive you through the whole, difficult process of bringing it to success.”