When starting out, entrepreneurs typically have to make the brave decision to stop working for someone else, with the comfort of a set salary, and focus their attention on creating their own business and becoming their own boss. 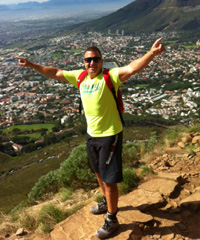 Elan Lohmann is the founder of SleekGeek

Elan Lohmann is someone who knows a bit about entrepreneurial sacrifice. He left his high paying job as head of digital for top South African media group Avusa (now Times Media Group) to focus his attention on starting SleekGeek, an organisation that promotes healthy living and fitness in South Africa. To do this, he went from earning over R100,000 [US$9,852] a month to drawing no income and living off savings which he calculates should last him another eight months.

“If people want to know about entrepreneurial sacrifice,” said Lohmann, “I’ve decided that I’m going to go to the wire [for this]. If I have to go and live in a student digs and ride a bicycle, I will. I mean I sold my convertible about a month ago; it was costing me too much money. I thought it would be a good thing to keep for my sanity, but now I’m driving my grandfather’s 1969 Volvo, and I was driving around in a Lexus convertible… I think you have got to make sacrifices for the things that you want to do. You know everyone has got to find their purpose and what they have a passion for.”

Nevertheless, Lohmann has a long term goal and added that he is “going to create an empire”, with the goal to transform the lives of 100,000 South Africans. “You can quote me on this one; I’m going to reach that 100,000 people. If it kills me, I’m going to do it,” he told How we made it in Africa.

SleekGeek started in 2011 when Lohmann and a group of friends decided to challenge themselves to lose some weight and get fit and healthy. “There were 12 of us,” he explained. “We each put R500 into the kitty so there was R6,000 to win. It was a six week challenge and we needed somewhere to communicate so I created a Facebook group for us to chat and learn from each other… and, yeah, that group of 12 people has now just passed 4,000.”

Lohmann said that SleekGeek’s power lies in this community of people – the core of which is a Facebook group – which provides support and knowledge to others signing up for the SleekGeek health challenges and lifestyle. “So essentially, when you come into the community, the community takes care of you, but there are those people that say, ‘well, where do I start?’ So I have a 30 day detox called the Reboot. Now I have had 1,300 people go through the Reboot, and with rave reviews.”

While there are certain suggestions and guidelines offered by the SleekGeek philosophy – such as the Reboot detox – Lohmann explained that there is no one product or service offered to aid people to follow a healthy lifestyle.

“My philosophy has always been that you have got to find something that you enjoy and works for you. I don’t believe that there is any one programme that works for everybody. There is no one size fits all and there are multiple approaches to a problem and everyone is an individual. I believe it’s each individual’s responsibility to find their own solutions.”

“So basically I don’t believe in selling potions and lotions and powders,” he continued. “I’m not in that business.”

SleekGeek runs eight week health challenges, where people can sign up for R500, a fee which Lohmann explained is more about getting people to have skin in the game, and most of it goes towards the prize money for winners of the challenge. In the last challenge SleekGeek gave away R80,000 in cash.

Lohmann added that he sees these eight week challenges as being more of a marketing opportunity, as opposed to a highly lucrative business, as they inspire others through social media to jump on board. He also highlighted that his community is a group that many other companies want to target. For example, his SleekGeek community caught the attention of the owner of iHealth Meals, a health food catering service that delivers around 650 meals a day to clients around Cape Town.

“To me it’s obvious,” said Lohmann. “Let’s say I reach a tipping point of 20, 30, 40 thousand people who are actively interested in their health. I mean, which health service provider doesn’t want to talk to that audience?”

SleekGeek has already been sponsored by Reebok. However, Lohmann said he won’t take on just any brand. “The key, as an entrepreneur, is I have to maintain integrity and trust with my community. It is just like any relationship,” he emphasised. “So for example, if Coke Zero came to me tomorrow and wanted to give me a few million rand, I would decline it because they don’t fit with my values because I don’t believe that the ingredients of their products are benefitting anyone’s health.”

“At the end of the day you have got to make some tough decisions, but if you give up on your integrity, then I think you will lose the game,” continued Lohmann. “And that’s why I believe that if I don’t put my community first on every decision that I make, I will make the wrong decisions… If my objective is just to make money then I am going to make the wrong decisions. In the short term that might be better, but this is a long term game.”

SleekGeek is partnering with iHealth Meals to introduce a paleo menu and food delivery service in Cape Town. Lohmann is an advocate of the paleo diet – which is also referred to as the caveman diet because it is based on what people ate before the development of modern day society. For example, it requires the elimination or reduction of dairy, grains and sugar from the diet. He added that, in addition to the food delivery service, there is also the opportunity to make money off a subscription fee for paleo recipes.

Furthermore, there is potential in the corporate market as well and Lohmann is currently running a corporate health challenge with a call centre business. “They have 3,000 staff and I’m running an eight week challenge at the moment to basically inspire their staff to be healthier. They also incentivise; there are R30,000 worth of prizes. I’ve got them doing some fitness tests as well.”

He also said he is about to launch the SleekGeek University to teach others skills to be more healthy, such as cooking basics and how to properly do a squat.

“I’ve now developed quite a strong network of professionals that I trust and I am going to be doing half [and] full day courses around the country where people can pay money to attend,” he explained. “The coach will take most of the money, I’ll take 20%.”

So what is Lohmann’s message to others who are considering sacrificing luxury to follow their entrepreneurial dream?

“So you have actually got to make peace with those things and realise it’s worth it, and I almost feel empowered because you can get stuck in your life,” he added. “I could have easily just carried on [in my old job]… that’s what 90% of people do.”