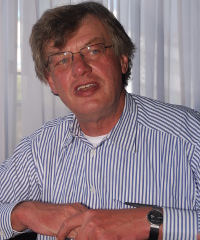 Babysitting and washing cars when I was 14. That was a long time ago; we didn’t even have Euros. I think in those days I made [the equivalent of] €2 an hour.

I must admit I am never awake at night. I sleep very well. I can even sleep standing up. That has helped me in my career because I have to fly an awful lot. I sit and I sleep. Once I did this (leans on his arm) and in 10 minutes I had fallen asleep. I was sitting still for such a long time that the stewardess came to me… and said: ‘Sir, you were sitting for so long we thought there was something wrong with you.’

Of course, I worry [about work] but I try always to have a plan B… and that gives me a lot of comfort because I always know that if things don’t go as planned I have a fall back.

I am very patient but also very result driven. I manage people not in the sense of telling them how to do [things] but I tell them what to do and I look at the results. My role is to facilitate them to reach those results. I am facilitator taking away hurdles so people can do their job well. I try to avoid telling how they should do it but they can also always walk in [and ask for advice]. I am very approachable, my door is always open. I hired you because I think you can do the job and if you can’t do the job then please leave. People like that approach more because it gives them freedom to do their responsibilities compared to having a bully who insists things have to be done a particular way.

5. What are the best things about your country, the Netherlands?

The Netherlands [has] a very open culture. We have a lot of different cultures and we are front runners in a lot of things because we have very high tolerance. You can do things there which are not allowed anywhere [else] in the world. So a lot of countries look at Holland and… learn from the way we do it. We are very free. Don’t try to tell a Dutch person what he cannot do [because] he will immediately do the opposite. If you have a sign [at a park] that says don’t go up on the grass, you will see people walking on the grass and I am sure all those people are Dutch people. They don’t bother. It is not for nothing that in English you have [the word] Dutch crossing, because Dutch people don’t go to the walk yard, they just cross the street.

The worst thing [is] how people complain a lot about the weather because it can be quite cold and rainy. We do not have real respect for heroes. If you do something very well, they chop off your head. The Americans say, ‘yes, I am a champion, I am a tiger’ and people have respect for that. If you say [so] in Holland [we tell you] ‘do normal, please behave, you are not better than I am’. So, when people are successful they don’t talk about it.

I have never had career plans in that sense. I went from one very nice job to another. Something always came on my path. So I have no idea what I am going to do next.

I like to read and walk the dogs. I like to play a round of golf… when I have a lot on my mind. You play very badly if you have a lot on your mind because you are still thinking, and then after a couple of hours it drops. For me, that is a good way of relaxing.

You need to have a good education, especially if you want to climb the career ladder, and try to build experience as soon as possible. Use your spare time to educate yourself in other fields than what you are studying. You are not an entrepreneur because you say so. Starting you own business is not that easy. You should be creative, see things other people don’t see, which is easier said than done because, again, not everybody is like that. Look for opportunities in the market and go for it. You will have lots of disappointments… learn from them. The first business you do is not always the most successful but you learn from doing it.

They should open up their borders and have movement and infrastructure that supports business. The more business you do, the better for the economy. The moment you have movements of goods and people and you create proper infrastructure then you will see the continent grow quite a bit. The good thing is that governments are really working on the infrastructure but the pity is it takes very long. I think all the nations should work together to get that done. That takes quite a while in Africa, unfortunately. The vision is there but getting there is sometimes quite difficult.

Willem Alexander Hondius is the CEO of Kenya’s new low-cost airline Jambojet which is a subsidiary of Kenya Airways, the country’s national carrier. Jambojet is set to begin commercial flights on April 1. The airline is selling one-way tickets for US$33. Hondius previously worked at Royal Dutch airlines KLM where he was the general manager for East Africa, and as executive vice-president for Transavia Airlines, a subsidiary of KLM.