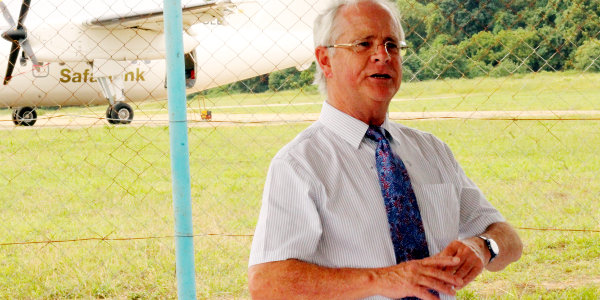 I was taken on as a casual labourer delivering Christmas post while in university. But previously I had sold newspapers on a street corner way back during school holidays. I had also worked for the local electricity board digging trenches manually and at Cadbury on a production line putting nuts on top of chocolates for several weeks.

2. What part of your job keeps you awake at night?

The downturn in tourism has seriously affected our trading over the last year, so recently it’s been: “Are we going to have enough cash coming in to pay salaries at the end of the month?” And at the moment there is always the concern that more terrorist attacks would worsen the situation in the tourism industry to the point when we would have to say: “Enough is enough, let’s just stop trading.” But that would be a very difficult decision because I have got 98 staff and I feel a responsibility to them as we all know how difficult it is to find jobs in Kenya.

A lot of them have been with me for years, and some came with me from the company I worked for previously. I’ve got people I have been working with for over 20 years and I know their family concerns. Safarilink is in a strong financial position but I know there are many hotels, particularly at the Coast, that are being supported by their banks because they are so adversely affected by the decline of tourism.

My grandfather was a real traditional stickler and he used to say: “If a job is worth doing, it’s worth doing well.” It means don’t just do it sloppy, do it properly, and that stuck with me. My mother was quite a mentor in lots of ways, and made sure I stayed on the straight and narrow.

4. What is the best professional advice you’ve ever received?

I honestly can’t think of any single piece of advice that changed how I deal with things. You learn different things from different people as you go through your career. I don’t think there is one formula for success. You have to be open-minded to things and particularly change – although it gets harder as you get older. I mean, technology has changed so much it’s hard to keep up.

5. The top reasons why you have been successful in business?

I pay attention to detail and I am a very organised person. I used to have really good memory retention, but now I make lists. I think one other thing that has helped me is that I have a technical background, so although I am not a pilot or engineer – over the years I have learnt enough to understand these aspects. As a manager you need to be able to switch from topic to topic really quickly and remember things you need to follow up on.

I am great believer in what is called ‘management by walking around’. As you get higher up the ladder, you can’t get isolated. You have to go down to the ground floor of the operations. For example when I am having a coffee in our lounge I often see things at check-in that are either good or bad that I can then follow up on later.

6. Where’s the best place to prepare for leadership? Business school or on the job?

You need a combination and it doesn’t necessarily mean you have to be actually enrolled full time in a business school. In the UK there are university courses you can do online, as I did, whilst still working. But you really only learn when you are thrown in at the deep end. For example I was out in Hong Kong in one of my previous jobs with a subsidiary of a UK company. The director of the company told me: “You have to run that company, you have to invoice the clients [and] you have to get the money in to pay the staff and all the other costs at the end of the month.” When you know there is no backup you really concentrate.

I have always played a lot of sport. In fact at one point in my life I played part-time professional football. I was never going to make the Premier League but at least it paid to keep my car running. Over the years I have played tennis, squash and golf.

But about eight years ago we did a ‘Freedom From Hunger Walk’ and some of the staff suggested we should do the Lewa Marathon the next year. I said it was a big jump from walking around town to doing a marathon. But Anu Vohora (sales and marketing director) had already done the marathon about three times. So we put a team in and we have participated every year since, which means I do quite a lot of jogging. Last month we had 14 of our staff at the Lewa Marathon. I am getting slower though and can only just manage to beat the girls now!

8. By what time in the morning do you like to be at your desk?

I get up a few minutes past 5am, get ready and leave the house about 45 minutes later. I normally get to the office by around 6:15am.

“Tell me about yourself?” You learn a lot about people by asking that question. You already have their CV with all the details of their academics, so what I am looking for is what I call ‘bright eyes’. It has actually got nothing to do with the eyes themselves. I just want to see if the person is interested, not looking all around, distracted or nervous. Most of our people are front office staff. They have got to be able to cope with people, and a lot of people from overseas of different nationalities. Hence it is very important that our staff come over as pleasant people, switched on and enthusiastic.

10. What is your message to Africa’s aspiring business leaders and entrepreneurs?

If you have got an idea, take the chance [and] go for it if you are really convinced it will work. However, you must have a budget and cash flow to support your business plan. And don’t just look at the good side, also look at the worst case. It then gives you the confidence to go forward and it will also give confidence to any investor who wants to help you.

John Buckley is co-founder and managing director of Safarilink Aviation, a Kenyan airline that operates scheduled and private charter flights to popular tourist destinations across East Africa. It was launched in 2004 by Buckley and Anu Vohora.