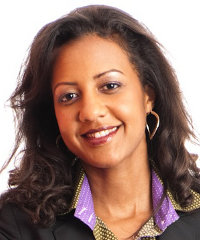 My very first job was in my mom’s office doing filing and all the basic stuff.

I would actually probably say my mom, and it’s not because she is in the industry, but because I think she always did things that were not expected of women, particularly in her generation. I think she set an example at an early age that you can do anything, and your gender doesn’t matter. So I think that imprint at a young age has probably had the most impact.

I think not knowing if you have done everything you could possibly do to move something forward is probably what is always at the back of my head.

I like to take on new challenges and go into areas that are quite innovative and unproven. So I think the knowledge and skills that I build taking on new challenges, it just keeps growing, and that enables me to handle many different types of situations or look at opportunities earlier and faster, in that kind of mind frame. So I think that has been a big part of my success.

There are a lot of great things about Kenya and I think one is that it’s a country that is starting to move towards its potential. I think it’s very much at the cusp of real growth in terms of growth of the middle class. It’s an optimistic outlook for the country and I think that is what has been a big turning point. A lot of work has been put into getting the country to that [point] but the optimism I think that cuts across every sector and every part of society is something that is really great about Kenya now.

I think the traffic in Nairobi has to be one of the worst things about Kenya.

Well I’m really interested in the whole technology industry in Africa and I really hope to kind of play a role in growing that into a real big industry in the future.

I practice yoga, and I’m quite athletic so I swim and I run. So it’s mostly athletic things.

Well, it’s kind of similar to the question before but I think realising its full potential comes down to really believing in Africa. I think some of the things we were talking about [at the WIE conference this week] about trust issues and things like that; I think that it struck me that really believing in Africa is key to harnessing that potential. I think that is where we start from. I don’t think we are quite there yet.

Isis Nyong’o is an investor in the African technology space. Until recently she was the managing director of Africa for InMobi, an international mobile advertising network. She has degrees from Stanford and Harvard Business School, where she was the president of the Africa Business Club. As managing director for InMobi’s African operations, Nyong’o quickly became recognised as a global thought leader on mobile advertising in Africa and was selected as a Young Global Leader by the World Economic Forum.