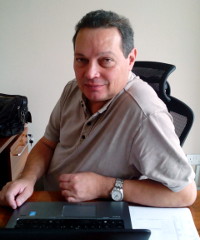 I started in the restaurant business when I was 14. I was working in a pastry shop and they were paying me very badly; something stupid like $25 month. I later became a chef, and then went into management.

I will not name a single person. I think I did well to join Pizza Hut in the UK because before that I had only worked at three and four star hotels. I had no experience in the fast-food industry. I worked at Pizza Hut for about 14 years in four countries. I learned a lot and gained valuable experience.

3. The parts of your job that keep you awake at night?

When things are not going so well. For instance, in Mombasa on the Kenya coast, the construction of our new Domino’s Pizza and Cold Stone Creamery outlets has been delayed by two and half-months. I find that very annoying.

I think I am good with people. I can be firm, but let people grow. I don’t tell them what to do. Rather I ask them what they think they should do. I have worked in many parts of the world and believe it has made me more tolerant, more open-minded.

5. The best things about your country?

France is very organised. Over the last 15 years they have almost completely rooted out corruption. I would say 20 years ago you could pay off a politician, but now you can’t.

I want to grow Domino’s Pizza and Cold Stone Creamery in Kenya. We have a number of new stores lined up. We also want to take the brands to three more countries. Altogether we want to have a strong presence in the region.

I enjoy swimming and playing pool. But honestly, I work a lot so don’t relax much.

9. Your message to young aspiring business people and entrepreneurs?

You have to study your product. I think the reason some entrepreneurs fail is because they have an idea and it looks ‘sexy’, but they don’t study the market. There are things that you can sell in India but can’t sell here and vice versa. So don’t travel to London, see something there, then come and duplicate it here. There are things that will just not work here.

It will happen when a new type of leadership comes into place. In general leaders in Africa are very old, both in age and thinking. Three months ago during the US-Africa summit I was looking at the leaders present and thought some of them should retire. Dubai became Dubai when a new young leadership took power. There is need for new blood. We see it in the business world and it is working well. A lot of really successful business leaders today are in their 40s or younger. We need that in politics and in leadership of countries as well.

Eric Andre is co-founder and director of Om Nom Nom, the Kenyan franchisee for Domino’s Pizza and Cold Stone Creamery. The two US brands recently launched five outlets in Nairobi and are set to open more outlets in Mombasa, at the Kenyan coast.