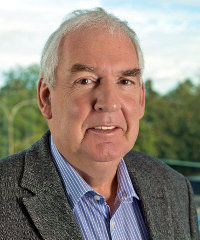 I was a pilot with what was then known as the British Overseas Airways Corporation, and the first aeroplane I flew was a Boeing 707. I had always dreamed of becoming a pilot, even though my first flight as a passenger was when I was 16 years old.

It’s difficult to be specific on this one because there are so many people who have influenced my career. Also, I look at how people behave and operate in every situation and I pick up positives and negatives, learning from their achievements and failures too.

However, if there was one individual who made a particularly big impact on my career, it’s Barbara Cassani. We both worked for British Airways (BA) and started Go, BA’s low-cost airline, together in 1998.

The toughest part of my job is certainly not how to run an airline, or fly aeroplanes efficiently. These are things that we can control in our own environment. The parts of my job that keep me awake at night are the things beyond our influence, such as the webs of protectionism and corruption that are rife in the aviation industry on the African continent.

We will only conduct our business in a professional, ethical way, and it’s always a concern that somewhere, someone will try to play a dirty trick or manipulate the system to suit their own interests, instead of the interests of passengers who deserve the best possible deal.

I persevere when I commit to something and never give up. I also place high value on aligning business objectives with what customers want. To me, it doesn’t make sense for them to be anything but aligned.

5. What are the best things about Africa?

I love the African continent as a whole and the incredible optimism that Africa’s people display.

I hate the corruption, protectionism, and the onerous bureaucracy that is sometimes evident when doing business on the continent. All three of these dreadful things inhibit people’s ability to move forward. I have no doubt that the entire continent could move forward and see much greater growth if these three things were eliminated entirely.

My current focus is to ensure that Fastjet becomes a successful, true pan-African low-cost airline that democratises airline travel for people on the African continent, and for those from abroad who are visiting.

I spend as much time as I can with my wife, five children and seven grandchildren. My wife and I live on a farm, so we care for our animals there too, and we’re also restoring the old farmhouse to its former glory.

Don’t be afraid to be adventurous and don’t let the system stop you. Keep on trying to make things work, no matter what, to make your dream come true.

Africa has got plenty of resources and, in my view, the key to its success is finding ways for its people to access their value. This is already starting to happen as the continent becomes more and more democratic, and it will continue to do so as wealth is increasingly spread to the middle class, encouraging the growth of a consumer society.

However, this change needs to be faster and the only way to speed it up is to remove corruption and bureaucracy because these two ills hinder the growth of economies, no matter where in the world they are found.

I also think that Africans should look outwards to other developing markets and learn lessons from them. Africa has the resources and the smart people who are ready to work to improve their lives. There’s no harm in learning how to make the most of these from countries elsewhere who have grown doing the same.

Ed Winter is the CEO of Fastjet, a low-cost African airline launched in 2012 that currently flies a number of routes in Tanzania, and has recently launched flights between Tanzania’s commercial hub Dar es Salaam and Johannesburg in South Africa. The London-listed company is backed by easyJet founder Stelios Haji-Ioannou and is also involved with the Fly540 brand which operates in Kenya, Ghana and Angola. Winter manages Fastjet’s operations from the company’s head office in the UK, and has over 40 years experience in the airline industry.