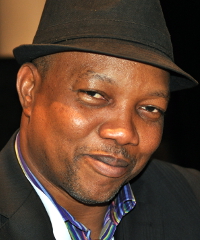 “A friend of mine described Nollywood as someone performing heart surgery using forks and knives. But the genius of it is that the patient survives,” says Charles Igwe.

I was a manager in City Bank, a financial services provider in Nigeria. Then there was a turn of events. I got married to one of the most creative people I have ever met [Nollywood film director, Amaka Igwe, who passed away this year].

She was leading the whole transformation of the creative space, and it turned out there was also a need for business structures to be built around that creativity to enable it to function more efficiently. I fitted naturally into that. As a team we were amazing, we did great work together.

My wife has been central to getting me to where I am today. She was a very gifted story-teller, and I realised the processes of finding investments and markets and all that was diminishing the creative capacity. So we built a system that provided investment and distribution for the finished product. Also one that provided for training around this creative process. So [she and her team] felt comfortable focusing on creating amazing stories. It was inspiring to watch that evolve.

I served as the first secretary general to the Conference of Motion Picture Practitioners of Nigeria for three years and in that time we created the entire guild’s structure, expanded abroad and took on people to train them in different places. As my wife always said, we were learning the rules set by the rest of the world – not because we wanted to follow those rules, but because we wanted to break them. The economy would simply not support what those rules required, so we learnt very well what the Americans, Chinese, the Indians and so on, were doing. And then we returned to Nigeria and we [shattered] all of that to become what we are today.

3. Any parts of your job that keep you awake at night?

I don’t worry about anything when I’m going to sleep, as a rule. But the greatest challenge in the process of creating content is the completion. If you start you have got to finish, because if you don’t then you won’t have a product. So we need to make sure the actual production process is running efficiently. We do not always have full control of our environment. We are recording in people’s houses, offices, borrowed spaces, and there are a lot of moving parts. Managing that as part of a project is quite a challenge. But we have learnt to do great pre-production which has led to increased levels of efficiency. What takes others 20 days to do, we will do in seven. So if we are disrupting someone’s house we make sure we film for two days and by the third day we should be gone… because we don’t have the liberty to stay as long as we want.

So we make sure we complete the product when we are supposed to. Remember, we don’t have institutional money; we don’t have grants. We don’t get that kind of money, so any we have is running at high cost and needs to be turned around really quickly.

It’s from understanding our audiences, understanding how they relate to our product, and by ensuring that we maintain the core elements that connect us to those audiences. As I say, as much as we deal with filming movies and all that, we are really in the audience delivery business. Because the money is not looking for the movie making, the money is looking for the attention that the movies are getting. That’s our tradable asset. The number of eyes and ears focused on our films, and our huge engagement with audiences… that is what advertising is looking for.

5. What’s the best thing about your country, Nigeria?

Our people are just amazing. I mean there is just a spirit there that finds a way around things and to get things done. What other people may see as problems, we find ingenious ways to address. That is a refreshing thing about the people.

Well we have had people in leadership who have not really had a great vision. We could have been an incredible country, and we are still going to be, but they have slowed us down a bit because they have focused on things like getting rich and holding onto power. They could have left foundations for an amazing country to spring up because it’s got the people for that. It has the resources for that. It has everything right in place. It’s just the vision of the people who tend to be in charge of government that is a problem. Maybe this is changing now, who knows – but it’s been slow to come.

I think that we need to leave a legacy for the next generation of film makers – the young people who are inspired by the things we have done. We have to leave the right foundations for them so that if they want a career in this industry, they have the option to find the right access and support and all that. Yes, we have done it without that foundation, but we can’t leave this industry with the same problems we had for those that are coming in.

We have a full value chain being developed – we have a film school, we have radio and TV stations, we have production facilities, and plans to build cinemas all over Nigeria. We have big plans, and we are taking Nollywood Global into other countries, to create an entire ecosystem in Africa to just generate massive amounts of content. I hear that there are over 100 VoD (video on demand) people coming on board. With digital there will be thousands of channels looking for content. We want to be sure we are represented in that content space. As Nollywood Global, our vision is to become the single largest supplier of content of African origin in the world. That is where we want to be.

I used to swim and play cricket, but I’m an old man now. I love games and music, and talking to brilliant young people with creative enterprise.

9. Your message to Africa’s young aspiring business people and entrepreneurs?

We have some of the most brilliant people on this continent because they can actually make things happen in the conditions they have. Look at Nollywood for example. A medical doctor who is a friend of mine described Nollywood as someone performing heart surgery using forks and knives. But the genius of it is that the patient survives. It’s not about the forks and knives, it’s the fact that the patient survives, and that it genius. And that’s what we have done with Nollywood. Impossible things have happened with us.

We should think differently because that has been the paradigm around which we have evolved in the Nigerian film industry, and many other industries in Nigeria. You can’t keep crying about the same problems we are having. You have to think differently. Take a step back and look at all other possibilities, including ones not even considered possibilities, and approach things differently. Everybody in Africa is trying to get rich by doing things the Americans and Europeans did years ago – industrialisation and all of that. That is not our forte. We have new ways to do the same thing. Let’s look at ourselves and say: what is it we have that they don’t, and how can we do things differently? Because if we do it the same way they did, we will continue buying resources from them and falling in line behind them. We don’t need to do all that. We should think differently to get around our own problems.

Charles Igwe is the as CEO at Nollywood Global Media Group and managing director at The Big Picture, a business consultancy for creative industries. He was an early investor in Nollywood with over 20 years’ experience in the Nigerian film and creative industries, and the businesses that surround it. He served as the first secretary general of the Conference of Motion Picture Practitioners of Nigeria, the umbrella body for all the guilds of the industry at the time. He also holds leadership positions within BOBTV, TMC Boxoffice Distribution, Top Radio 90.9FM, and Amaka Igwe Studios. Prior to entering Nollywood, Igwe was trained as a biochemist before becoming a banker at Citibank.