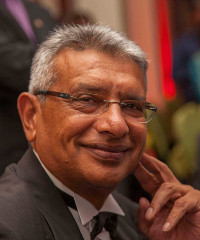 When I was studying in the UK I worked in a laundry [business]. I was hired to clean clothes and for that I was earning KSh. 200 (US$2.3) a week. I also worked in a metal factory where we were making shelving for supermarkets. During the holidays I worked for the post office delivering letters during the day and during the night shift I sorted the mails that came in. At one point I also worked at a department store where I had to sell mattresses, beds and pillows. I was about 16 when I started working.

It has not been one individual. A lot of the staff that I have worked with over the years have impacted me. Insurance is a practical subject; you have the principles and the laws… but how to underwrite a risk, how to deal with the claim… is all practical. I have had some really good teachers. All these people have been junior to me, they have taught me a lot and I am still learning.

Insurance is changing quite fast. A few years ago terrorism was something that we never thought about until the 9/11 [bombing of the Twin Towers in the US]. We were sitting here in Kenya but we [Apollo Insurance] ended up paying for the claims of 9/11 because we had insured aircraft. That shows the international impact of insurance.

When it comes to growing this business, Pratul Shah, our group advisor who has worked with us since 1987, has had a big impact on our business.

As soon as I leave the office I hardly ever worry about work. In the whole of my working career the only time I have been kept awake at night because of work is about two or three times. One time we had a group of people we had employed and they had started gossiping and trying to create a caucus that did destabilise the company. That really created a problem and we had to get rid of them quite fast.

The other two times were because some things went wrong but I can’t remember what it was. I believe if you have done everything properly then there is no reason for you to worry. The staff we have are very good and the majority of them do the right thing.

One of the things my staff don’t like is that I am very demanding. I require things to be done properly. I am good at maintaining relationships. The staff might not be willing to talk to me but I make a point to do doing things with them. For instance, I can sit with them and have lunch at the cafeteria. I mingle with the staff and sometimes I think some of them are quite candid and they will talk to me nicely while others will be a little bit worried. But they have found out that if I hear something from them it will never be attributed to them. So nobody knows who told me what.