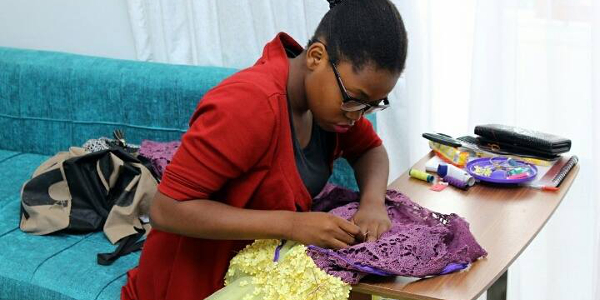 At the end of 2011, Inioluwa Ajayi started House of Dabira, an Ibadan-based fashion house that designs quality, custom-made outfits and formal attires. The company has won a number of awards since.

A whopping 148 young Nigerians applied for the 2015 Anzisha Prize, an award for African entrepreneurs in the 15-22 age group. This is by far the most number of entries from any country accepted this year, and well over a quarter of the near 500 applications received from the continent overall. Kenya had the second highest number of entrants – at 56.

Nigeria, the continent’s most populous country, saw entrepreneurs apply across a diverse range of industries, with the largest portion being within agriculture.

But what is it that drives these young Nigerians to pursue entrepreneurship, and what do they hope to achieve for themselves and others?

Below is a taste of some of the applicants received from the country this year.

At the end of 2011, Inioluwa Ajayi (just 18 at the time) started House of Dabira, an Ibadan-based fashion house that designs quality, custom-made outfits and formal attires. Since then she has participated in several fashion shows and received a number of accolades for her work, including Entrepreneur of the Year at the 2014 Oyo Students Entrepreneurship Awards.

Today Ajayi (now 21) is a law graduate from University of Ibadan and has an average of four to six clients a month, with an expansion strategy in mind.

“We plan to significantly grow our client base both within and outside Africa by creating signature collections for top retailers, opening House of Dabira stores in key cities across the continent, listing on e-commerce shopping sites like Jumia… and creating a diffusion line, Da’ara, to produce more affordable outfits,” she explains.

“Finally, we plan to grow the House of Dabira Campaign against domestic violence by investing 5% of all profit into supporting victims of domestic violence, leading multimedia campaigns to eradicate the scourge, and creating projects to teach young girls about design.”

Electrical engineering student, Ndilemeni Kenechukwu (22), has been attracted to entrepreneurship since the age of 13 when he read Rich Dad Poor Dad, a book written by American businessman and investor Robert Kiyosaki.

In 2013 Kenechukwu started Kenny Palms Nigeria, which predominately focuses on production, packaging and sale of palm oil and raw palm kernel oil, as well as other by-products. The company currently has 12 employees.

“There is increasing demand for hygienic and low cholesterol, edible palm oil due to the upsurge of heart related ailments, disease prevention awareness, and the most recent Ebola outbreak,” he explains.

His goal is to become Africa’s leading “indigenous producer of palm oil and its associated fats” by 2035 and is re-investing a large portion of revenue into scaling up production.

Her inspiration for starting the company was drawn from her own experience. As a child brought up in a poor family, she found that she would often return to hospital after being discharged, as she was unable to fully recover in the home environment.

She realised that there was a need to provide an alternative healthcare solution that would support traditional methods, and has partnered with a local hospital to facilitate a post-care option for discharged patients from poverty-stricken families. The aim was to prevent their home and social environments from landing them back in hospital.

According to Kwomo, her model can be easily scaled and replicated across Nigeria.

“Poverty is a complex, multidimensional disease that requires an equally broad and comprehensive cure. Thus De Rehoboths envisages a holistic healthcare package solution that addresses both the biological disease and the socio-economic factor that aggravates it,” she explains.

“It is a model of healthcare that transcends the traditional medical perspective of disease simply being a matter of biology. It addresses all aspects that contribute to total well-being, including biological, social and psychological factors, with tailor-made family action plans that address several dimension of health at once – which connotes health, housing, income generation, education, and citizenship.”

Launched just before New Years, the company is already making around US$600 a month. According to Yussuf, the business does not just provide employment for two others, but also brings a stable income to cassava farmers.

“Farmers must sell off their cassava within two weeks of harvesting. This makes cassava farmers anxious and this anxiety makes buyers price down the cassava. So our coming on board gives some farmers the assurance that there is a market for their product.”

Due to a lack of start-up funds, the company currently outsources production and packaging, and has to monitor quality to ensure it meets standards. However, Yussuf says the aim is to raise enough funds to set up the business’s own production plant.

“It will cut our production cost, we will [be able to] employ more people, make more profits and, best of all, we will be in direct control of the quality of our products.”