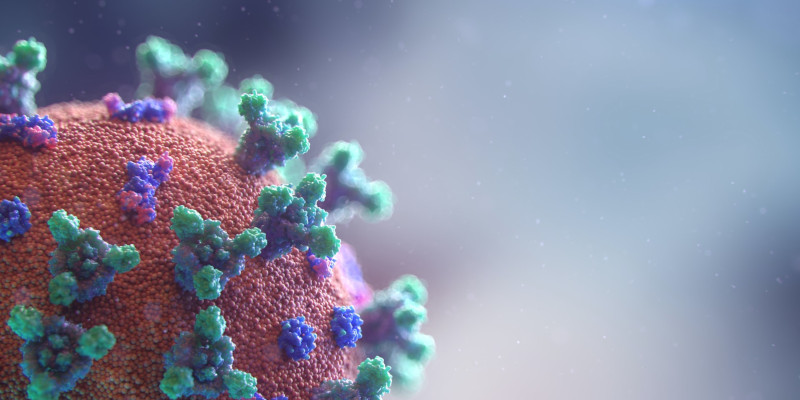 This article is an excerpt of a McKinsey report titled, Tackling COVID-19 in Africa

As of March 31st, more than 770,000 cases of COVID-19 had been recorded worldwide, with nearly 40,000 deaths. The number of cases, and deaths, has been growing exponentially.

Compared to other regions, the number of recorded cases in Africa is still relatively small, totaling about 5,300 cases across 47 African countries as of March 31st (Exhibit 1). Even though the rate of transmission in Africa to date appears to be slower than that in Europe, the pandemic could take a heavy toll across the continent if containment measures do not prove effective. 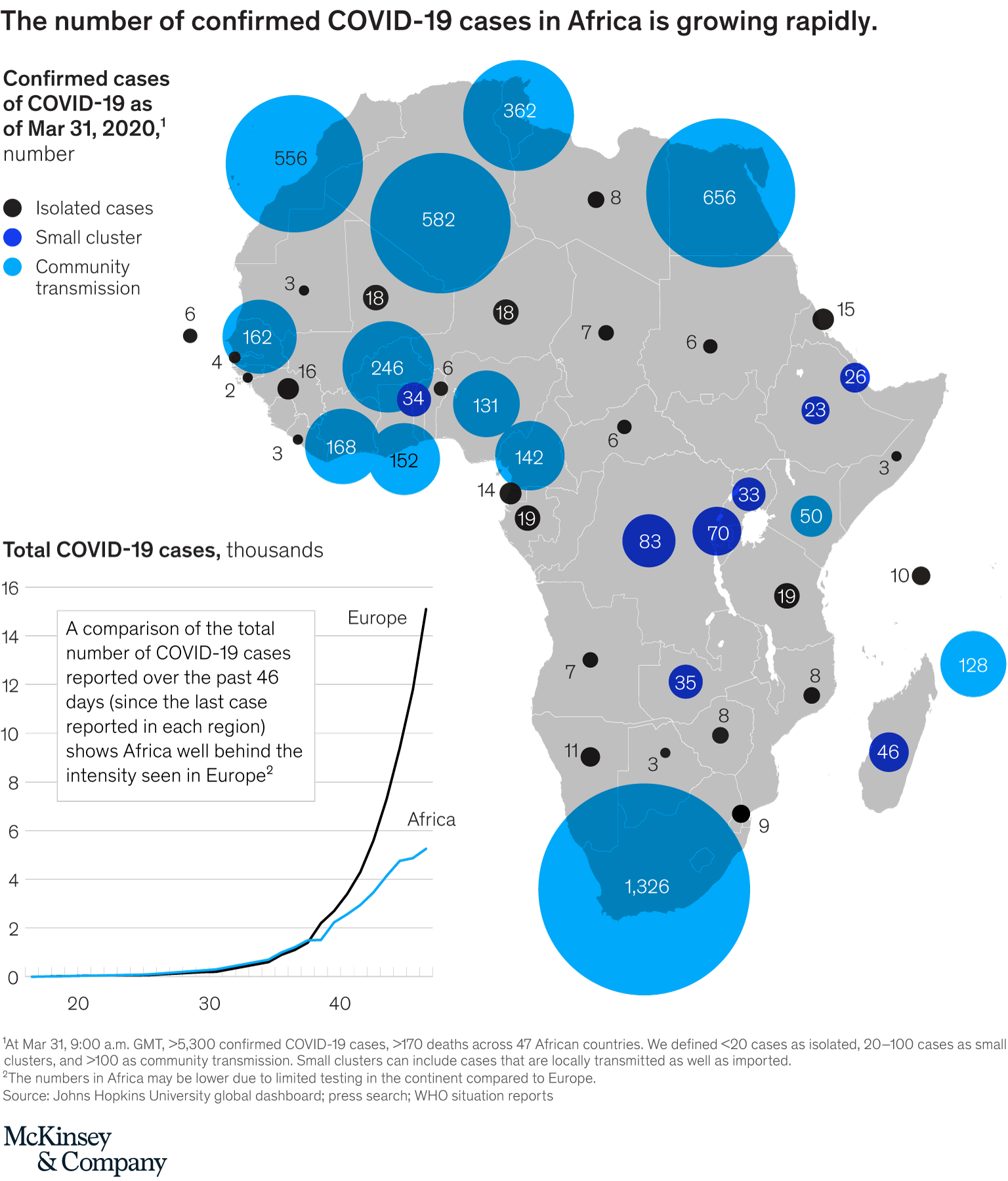 Against the backdrop of this worrying public health situation, African countries will have to address three major economic challenges in the coming weeks and months:

For Africa’s economies, the implications of these challenges are far-reaching. A slowdown in overall economic growth is already being felt, and this is acute in hard-hit sectors such as tourism. Many businesses, particularly SMEs, are under significant cost pressure and face potential closure and bankruptcy. That is likely to lead to widespread job losses. At the same time, the pandemic will impact productivity across many sectors. Closures of schools and universities could create longer-term human capital issues for African economies and could disproportionately affect girls, many of whom may not return to school. Not least, the crisis is likely to reduce household expenditure and consumption significantly.

The knock-on effects for the African public sector could be severe, in terms of reduced tax revenues and limitations on access to hard currency. African governments will face rising deficits and increased pressure on currencies. In the absence of significant fiscal stimulus packages, the combined impact of these economic, fiscal, and monetary challenges could greatly reduce Africa’s GDP growth in 2020.

To gauge the possible extent of this impact, we modelled four scenarios for how differing rates of COVID-19 transmission – both globally and within Africa – would affect Africa’s economic growth.

Even in the most optimistic scenario, we project that Africa’s GDP growth would be cut to just 0.4 percent in 2020 – and this scenario is looking less and less likely by the day. In all other scenarios, we project that Africa will experience an economic contraction in 2020, with its GDP growth rate falling by between five and eight percentage points (Exhibits 2 and 3). 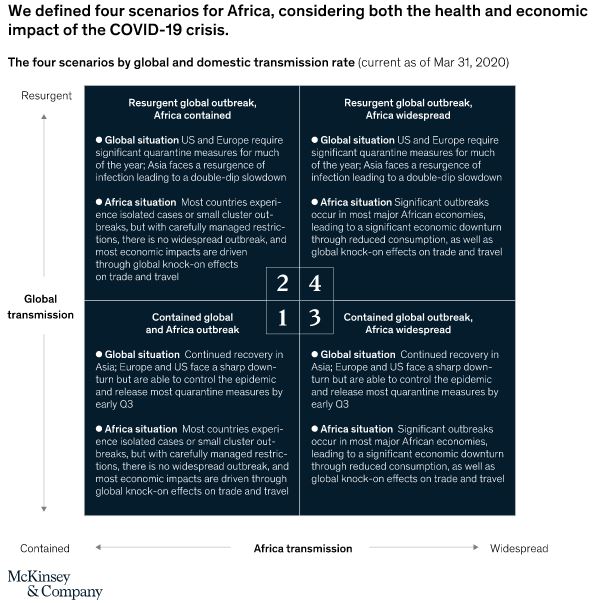 The four scenarios are as follows: 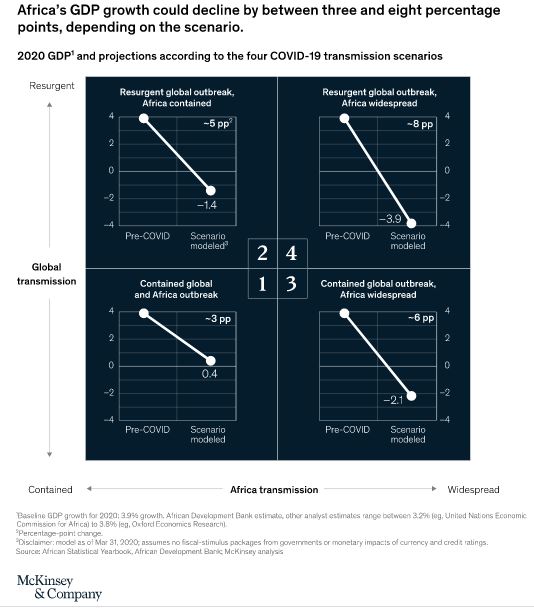 These scenarios do not take into account the potential effects of any fiscal stimulus packages that may be announced by African governments; these should improve the economic outlook. However, we should also note that the scenarios do not take into account currency devaluations, inflationary pressure, or recent credit ratings from Moody’s and similar bodies – which could worsen the outlook. There is no room for complacency.

Depending on the scenario, Africa’s economies could experience a loss of between $90 billion and $200 billion in 2020. Each of the three economic challenges outlined above is likely to cause large-scale disruption. The pandemic’s spread within Africa could account for just over half of this loss, driven by reduced household and business spending and travel bans. The global pandemic could account for about one third of the total loss, driven by supply-chain disruptions, a fall-off in demand for Africa’s non-oil exports, and delay or cancellation of investments from Africa’s FDI partners. Finally, oil-price effects could account for about 15 percent of the losses.

While the pandemic’s economic impact – alongside the oil-price shock – will be serious right across the continent, it will be felt differently in different countries. For example, our analysis suggests that the following impacts would occur in Nigeria, South Africa, and Kenya:

Kartik Jayaram and Acha Leke are senior partners of McKinsey & Company, based in Nairobi and Johannesburg respectively. Amandla Ooko-Ombaka is an engagement manager and Ying Sunny Sun is a partner at McKinsey; both are based in Nairobi.