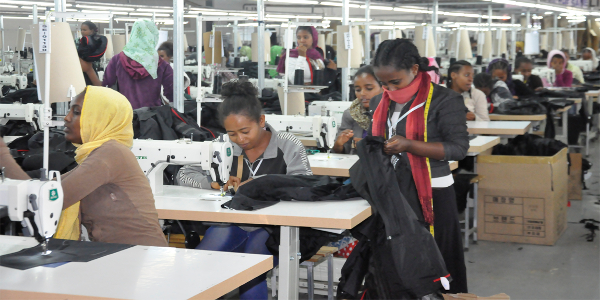 Ethiopia is distinguishing itself as a clothing manufacturing hub.

A good friend of mine from Delhi recently told me that his government’s national strategy was based on the premise that it never “missed an opportunity to miss an opportunity”! This reminded me of many governments in our part of the world when it comes to the industrialisation of their economies.

As we seek to interrogate the meaning of the so-called fourth industrial revolution (4IR) and its potentially seismic impact on Africa’s economies, I fear that a megatrend may be neglected; and the opportunity cost for the continent significant. For Africa, it is not so much about 4IR as it is about 3IR and even 1IR and 2IR.

Few resource-propelled African states have comprehended and taken full advantage of the so-called commodity super-cycle that was driven by China’s insatiable demand for commodities since the turn of the century.

This is unlike the case of Australia where its economy has maintained robust growth throughout all crises, experiencing 28 straight years of expansion underwritten by good governance, enabling infrastructure and strong resource prices that have transformed its economy to the extent that services now account for almost two-thirds of its gross domestic product (GDP).

African economies should have done more to hitch their resource-reliant economies to the Chinese long term growth train. We have passed the peak of the commodity super-cycle and China’s economy is shifting, or “re-balancing” as it is often referred to, toward services and consumption.

While African leaders have been charmed by China’s political courtship of the continent, the real play is the shifting structure of the Chinese economy itself and the way manufacturing is moving out of China to developing economies.

Justin Lin of Peking University (formerly chief economist at the World Bank) wrote in 2012 that China was forecast to lose up to 85 million labour-intensive manufacturing jobs within the next decade or so. In the same way that Japan lost almost 10 million jobs in the 1960s and Korea almost 2.5 million in the 1980s due to rising wages and production costs, the Chinese economy is now undergoing a similar (but far bigger) transition.

The days of China being a source of cheap labour are coming to an end. This is now creating opportunities for aspirant competitor economies to attract investment and to compete with the “China price”.

What the Chinese Government did not foresee was the impact of Donald Trump’s protectionist tariffs on “made in China” exports. Since May of this year, the average tariff on China’s exports to the US stands at 18.3% and is set to rise to 20% from 1st September 2019. This is resulting in higher prices for US consumers and lower margins for US firms. Trump has been incredibly disruptive to the global production chains of multinational corporations (MNCs). Global companies are having to rapidly re-think their supply chains and are establishing new networks of procurement.

The escalating tariffs on China’s exports to the US are now acting as an accelerant to the departure of jobs from the Chinese economy.

The Financial Times recently reported that 50 MNCs are either in the process of moving production away from China or are considering doing so. These include Apple, Nintendo, Dynabook, Ikea, HP and Dell. Most are moving to Southeast Asia, in particular Vietnam which is fast becoming a major beneficiary of the trade war.

And Nikkei reports that since June, 33 listed Chinese companies have announced plans to expand production outside of China with 70% saying that they intend to set up shop in Vietnam.

Beyond Vietnam, other Asian economies are also benefitting from the hollowing out of Chinese manufacturing capacity. South Korea, Taiwan, Cambodia, and Bangladesh are all ramping up manufactured exports to the US.

There is a prospect for forward-looking African countries to emerge as “new Vietnams”.

Ideally South Africa should be best positioned to take advantage of this megatrend if only it could carry out the necessary structural reforms required to make this a reality.

In the meantime, Ethiopia is emerging as the best candidate to assume this role. The country is now attracting lower-end but employment generating manufacturing ($3.3bn of investment in 2018) into its burgeoning special economic zones including textiles, clothing, shoes and leather goods. With improving infrastructure and increasing liberalisation of its economy, Ethiopia is becoming conducive to attracting capital that seeks a manufacturing platform in Africa – both for export and to supply Africa’s own consumer economy.

African states must be “competitive-advantage creating” and in the same way as China has factored Africa into its own future, African countries must factor China (and now Asia) into theirs.

While we focus on the 4IR and its implications for Africa, let’s not be distracted from seeing the opportunities in the 3IR, for this is where the bulk of our labour force will be absorbed. There is no sector that creates jobs, deepens local value chains, encourages the growth of a services economy and embeds IP like manufacturing.

Dr Martyn Davies is the Dean of the Alchemy School of Management, Deloitte Africa and a Senior Fellow at the Mastercard Center for Inclusive Growth. This article was first published by Deloitte.