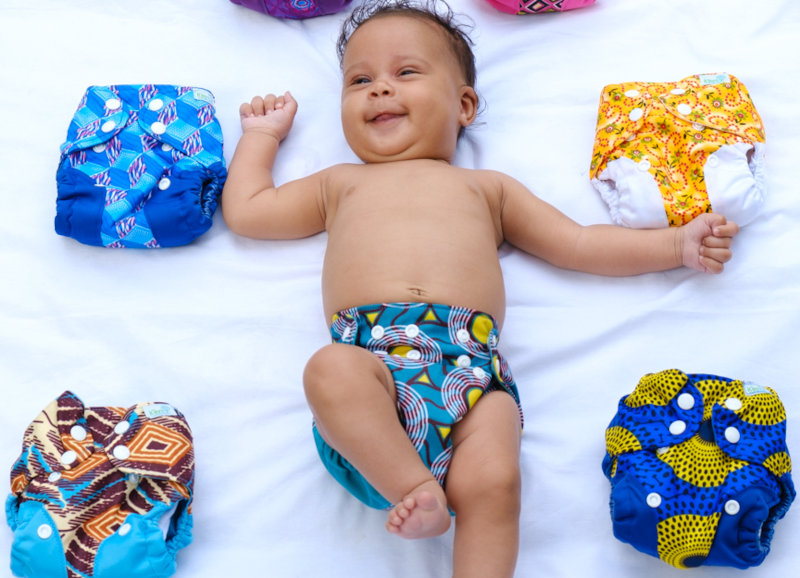 Valerie Muigai discovered reusable diapers when she was expecting her first child. She had just relocated to the US as her husband pursued postgraduate studies and with their student budget, Muigai needed to save every coin.

The washable diapers proved a godsend; they were cheap, easy to use and environmentally friendly. About 20 billion used disposable diapers are dumped in landfills annually; they can take up to 500 years to decompose completely.

When Muigai was expecting her second child, a friend taught her how to make reusable diapers. In 2012, when she took up a job in international development in Uganda, she continued producing diapers and made extra to gift to family and friends. “I saw a gap in the market; people were keen on reusable diapers in Uganda. I started a small business, which I ran from home with one tailor, even as I continued my work in international development,” Muigai recalls.

In 2014, Kijani Baby Uganda was founded and her hobby turned into a business. For the first two years, it operated from Muigai’s house and depended on the fabric she or her friends brought back whenever they travelled to the US. Muigai saw the potential to provide reusable diapers in the region and internationally. She hired more tailors, moved to a workshop and contracted a fabric supplier in China that did commercial shipping to Uganda. She opened a retail store in Kampala and expanded to have Kijani products stocked with about 40 third-party retailers in the Ugandan capital.

The company’s goal is to manufacture high-quality, affordable, washable modern diapers. So far, it is the only company in Uganda offering modern cloth diapers. 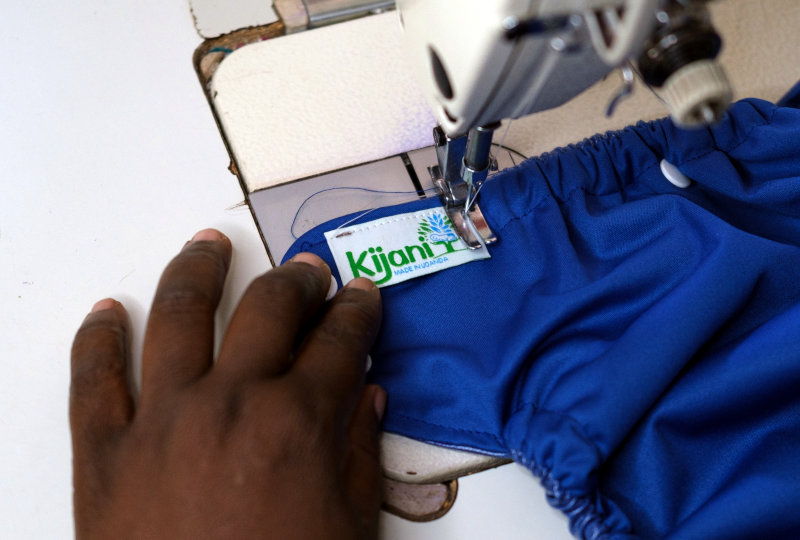 Kijani diapers are manufactured in Uganda.

The diapers comprise a wipeable outer cover made from polyester laminate and an absorbent cotton insert or soaker, which is changed every two to six hours. Some soakers can last through the night.

The cotton soakers are made in a factory in Uganda while Kijani imports the polyester laminate from China as it is not produced in the region. The laminate is a unique waterproof, light and breathable fabric also used in items like watersports wear and disposable pads.

The Kijani team sews the diapers at the Kampala workshop and packages them for sale locally or the export market. “One diaper with a soaker retails between $6.50 to $8.00 while an extra soaker is $2.25,” Muigai says.

The aim is to reach low-income families that would benefit from the savings, however, import costs of the waterproof material is high, which pushes up the overall production outlay. Also, the need to maintain a high-quality diaper that can compete with the best in international standards has meant the product isn’t priced as low as Muigai had hoped. As a result, most of her clients are middle-income Ugandan families concerned about the pollution and wastage aspect of disposables as well as their questionable quality. “Many of the cheaper brands use perfume and chemicals that cause diaper rash,” she explains. 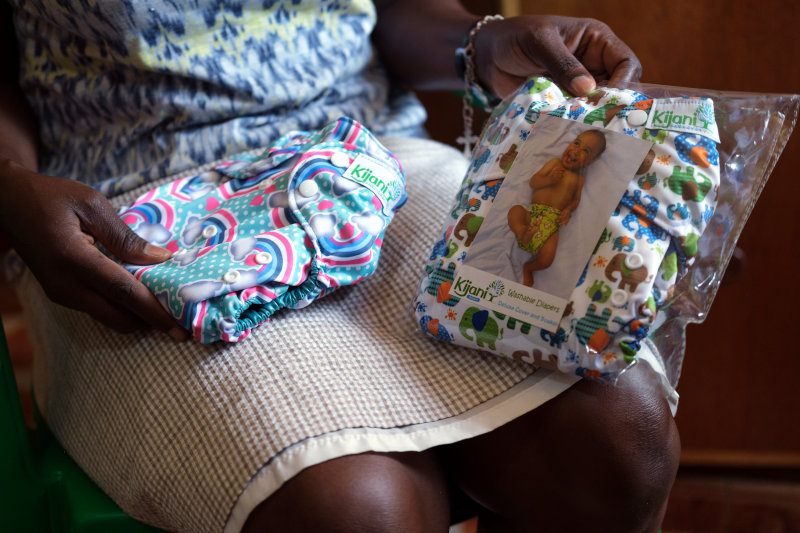 Customers in Uganda prefer to buy from retail stores so Kijani depends largely on local supermarkets to stock its brand. “There is a huge market potential but in Uganda, most transactions are face to face. In the US or UK, sales are largely online,” says Muigai.

However, since the Covid-19 lockdown, more Ugandan customers are ordering via WhatsApp and Jumia. Deliveries are made by a motorcycle delivery service called SafeBoda or, in the case of large orders, the company van.

Kijani uses distinct African-print fabrics which have proved attractive to an international clientele. The company exports to Kenya, the US, the UK, Italy, Netherlands and Belgium and is hoping to expand into more countries by the end of 2021. The export market has proven lucrative and will be a key focus area for the company. Distributors in the US and UK provide stock for smaller retailers but Kijani also sells on Etsy and Amazon and ships directly from Kampala to retailers in Europe via DHL.

The company has had a 50% growth rate year on year despite the small market for washable diapers. “Globally, reusable diapers enjoy 5% market share,” Muigai notes. 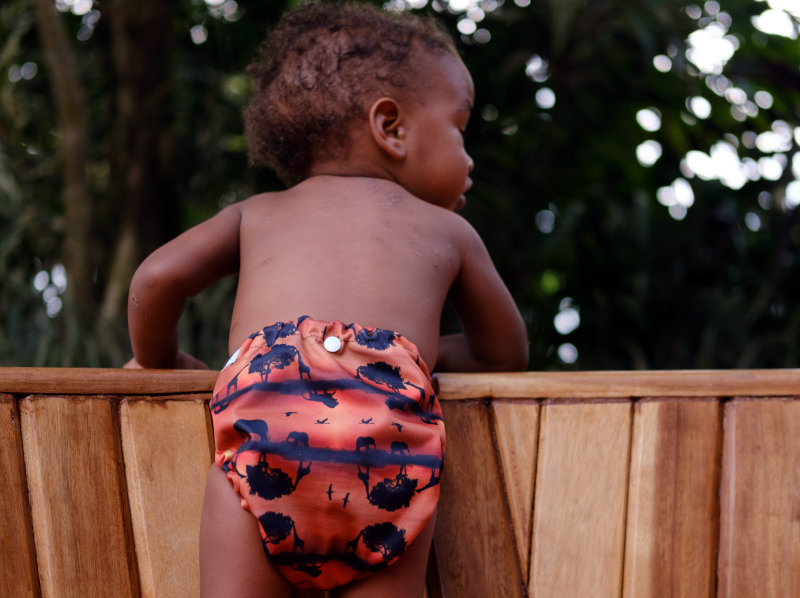 Kijani exports to the US and several European countries.

Initially, Muigai funded her venture with her own money and reinvested its profits to grow the company organically, until 2018, when she obtained an investment loan to boost growth.

The business is at a break-even point but Muigai wishes she focused on profitability from the beginning rather than just impact.

“We use good quality raw material and want to pay our tailors well. Yet, we want our diapers to be affordable, so we try to keep the price of diapers low. This is a challenge when we want to raise funds because we are considered too commercial for NGO grants and not profitable enough for private venture funding.

“We are analysing our market to focus on the profitable segments. Profits from these can help us reach lower-income families. We want to create a profitable business then move to impact instead of starting with impact and trying to make a profit; we had our priorities a bit upside down,” she muses, adding that she has learnt to be realistic about what a business can achieve at different stages.

As a result, Kijani has shifted its focus to export sales where the margins are bigger and Muigai is hopeful this strategy will fund local expansion. Her dream still is to make the diapers accessible to low-income families as well as create stable employment for female tailors.