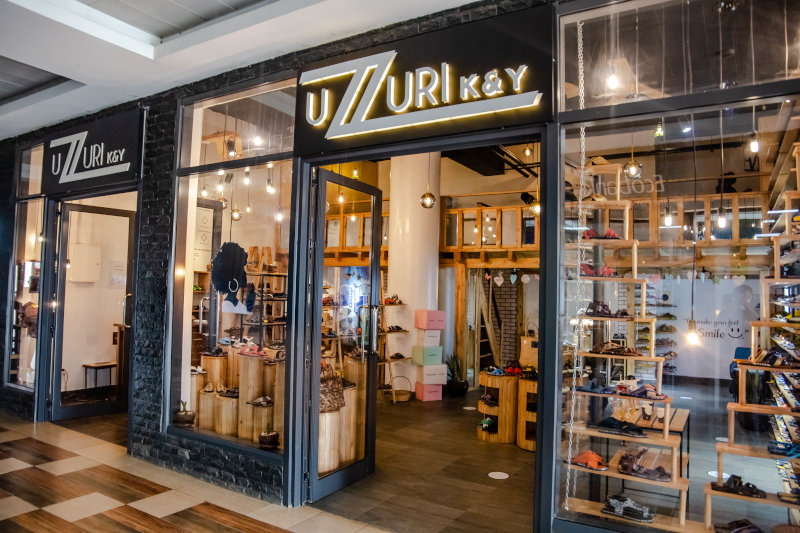 One of UZURI K&Y’s retail stores in Kigali.

Kevine Kagirimpundu and Ysolde Shimwe met at the College of Technology and Sciences at the University of Rwanda in 2011. By 2013, they had co-created their first pair of handcrafted shoes with a uniquely African aesthetic and sustainable footprint, and sold them to one of their friends for 10,000 francs ($10). Today, they own four UZURI K&Y retail stores in the Rwandan capital of Kigali and have plans to later this year expand their brick-and-mortar presence into Nairobi, Kenya, where the brand already sells its shoes via a distributor.

To many, the success would seem rapid, but that would undermine the dogged determination of Kagirimpundu, the chief executive, and Shimwe, the creative director.

At the start, the pair had no money. They befriended Mr Francois, an elderly cordonnier, a repairer of shoes, and tried to persuade him to collaborate with them, initially without any payment. One day, when they couldn’t find him on the street he usually worked on, they tracked him down at his home 45 minutes away by knocking on doors and asking if anyone knew where the cordonnier lived. Their tenacity convinced him to offer them his services.

The next battle was pitching their wares to a sceptical customer base. “In Rwanda, we don’t really have ‘Made in Rwanda’; in general, people don’t buy locally produced products,” Kagirimpundu says, “especially not in footwear and fashion. So, we would knock on people’s doors to sell our shoes and we would get our family members to help.” 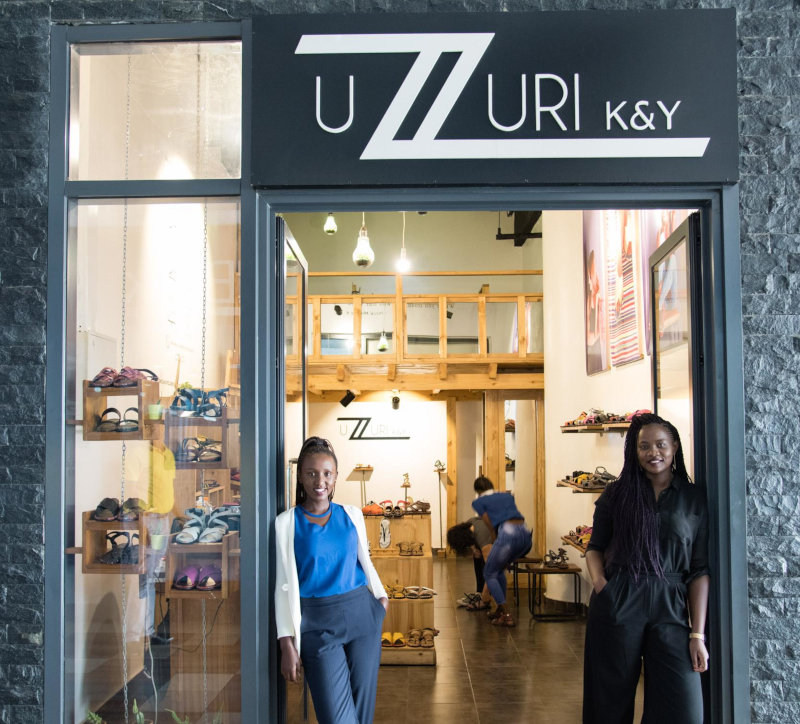 Kagirimpundu recalls the moment a future customer shared one of their Facebook posts – the pair didn’t have the budget for a website – featuring a new pair of UZURI K&Y shoes. “It was such an important moment for us because people started learning who we were.”

Soon more people were asking where they could buy their own pair of shoes. “I hosted customers in my home – well, my parents’ home – and I’d also take a motorbike, often in the rain, to see a customer who said they might want a pair to give as a gift. Sometimes the customer would say, ‘Oh no, it’s actually not fitting very well. Can you go back and fix this?’ I’d have to go back home, fix it and go back.”

Simultaneously realising a growing demand for their shoes and the unsustainability of door-to-door sales, Kagirimpundu and Shimwe visited malls and shops across Kigali, asking retailers to stock their brand. After hundreds of rejections, a store in one of the major malls in Kigali agreed. “We were so happy, I don’t even remember if we asked them to pay us. From then, people learnt of local footwear made in Rwanda that is unique and covered in prints.”

The shoes are made from discarded rubber tyres collected and reworked into flat sheets. They are then cut into footwear patterns using customised tools. The shoe itself is made from canvas, sourced locally, or vegetarian or faux leather, which the company buys from outside of Rwanda because it cannot be purchased within the country. The final steps in the process include cutting and weaving braids, using traditional methods, and creating fashionable prints.

What began as showcasing a few pairs on a shelf in a shop that didn’t belong to them, grew to include five square metres of retail space. Now UZURI K&Y owns a store in that very first mall.

Of course, they couldn’t have done it alone. They needed employees and, besides the company founders and Mr Francois, few others knew how to make the shoes. Those who did could not be paid for their work. Kagirimpundu and Shimwe essentially had to create their own skilled labour force. They presented five people with the opportunity to learn how to make shoes. The relationship was a win for the business but also a chance for people struggling with unemployment to develop a valuable skill. 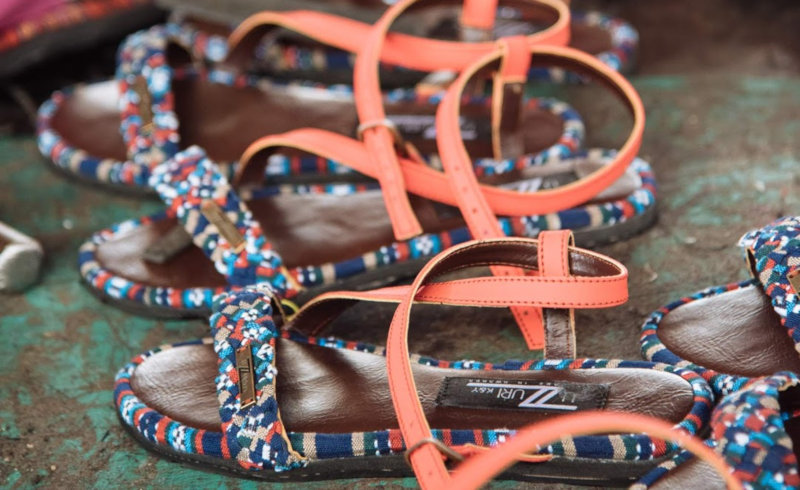 The soles of the shoes are made from discarded rubber tyres.

The pair plunged all of their profits into growing their business but soon realised they had to access funding for any significant expansion. In 2016, they applied for and secured capital from an investment fund in the UK. Subsequently, they have been awarded grants from different organisations in Rwanda and globally.

The changing customer base

In 2019, 60% of UZURI K&Y’s customers were tourists and expatriates. However, with the fears and bans surrounding travel in 2020, tourist numbers rapidly dropped. Positively, during that time, their Rwandan customer base grew to 80%.

“Our customers are mainly millennial women between 25 and 35 years old. These women are looking to buy authentic and affordable products that are sustainable and create change in their communities,” Kagirimpundu explains. “We’re reducing unemployment; we’re recycling tyres to create durable outsoles; we’re a part of the circular economy. At least today it has a name. Before we said we were in fashion but now we’re in the circular economy and we’re staying there.”

While UZURI K&Y has a presence on a European-based e-commerce platform, which is where most of its international consumers purchase their shoes, the situation in Rwanda is different. Limited access to the internet means few online consumers and there is a general mistrust in any retail method other than cash for products. But Kagirimpundu is eager to grow the 3% of the business’ revenue stream that comes from e-commerce. “We are looking forward to investing in better experiences online so that we can establish a long-term relationship with our customers.” 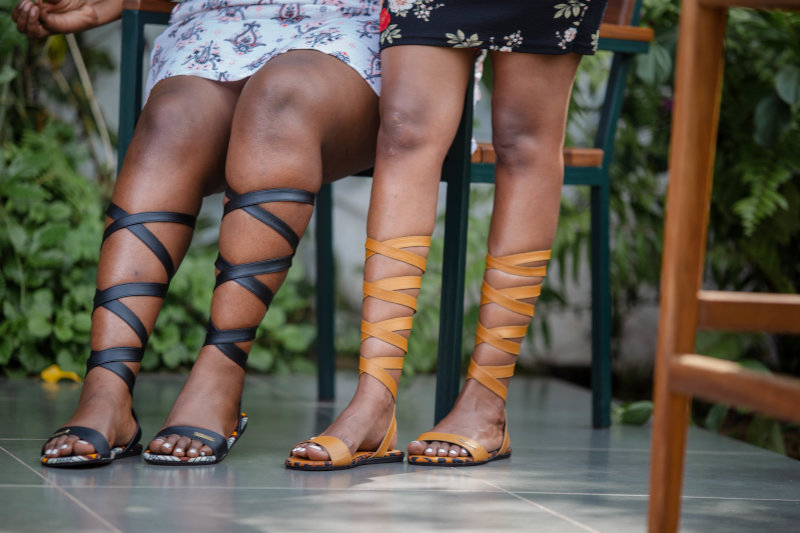 UZURI K&Y’s biggest customers are women between 25 and 35 years.

Kagirimpundu and Shimwe lay claim to being the original Rwandan shoe fashionistas but the marketplace is growing increasingly busy. Despite the growing number of competitors, Kagirimpundu believes UZURI K&Y still stands apart. “I’m proud to say we were the pioneers of the footwear industry and that’s something special in Rwanda. Our products are authentic and handmade. We embrace the culture of Africa. We do not create mainstream; we’re growing a niche market for people who care about sustainable products – recycling materials that are damaging our environments by removing them from landfills and neighbourhoods. We need to rethink how we consume products, reuse and make it fashionable at the same time.”

The partners have outgrown their initial teething problems – sourcing the right raw materials, designing the perfect shoe and attracting customers – but as Kagirimpundu opines: “the challenges never go anywhere; they become something else.” For the maturer business, these include questions over where, when and how to expand their company, accessing more finance and developing the team with the best management practices. Nevertheless, Kagirimpundu is confident about the future.

“We are looking to have more stores in Kigali, maybe up to six stores. Then Kenya this year and maybe South Africa next, who knows? But in other places in Africa, too, because we believe Africa is a great market for us.”