Things have looked somewhat depressing for South Africa’s economy of late. Last year was particularly poor, set off by the economy shrinking 0.6% in the first quarter mainly due to long, costly strikes in the platinum sector. And by year-end the country was in the grip of a power crisis, with national utility Eskom implementing severe load shedding which is likely to continue for months. 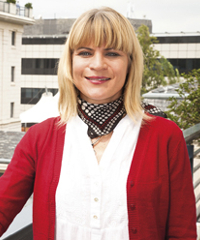 According to Nicky Weimar, an economist at Nedbank, South Africa probably failed to grow by more than 1.4% in 2014, “which is weak for a developing economy”.

However, there is one ray of hope. Oil prices have plummeted almost 60% since its June peak, and over 40% since November.

While the lower oil price is already placing strain on African oil exporters such as Nigeria, South Africa stands to benefit, along with other oil-importing developing countries. At face value, the benefits are obvious: if the cost of oil comes down, the cost of fuel comes down. This is especially helpful considering Eskom’s increased importation of diesel as it struggles to generate enough power to meet demand.

The lower fuel cost is also expected to have a knock-on effect on food and consumer goods prices, impacting both production and transport costs and easing inflation.

“And that would put money back into consumers’ pockets,” noted Weimar during a presentation at last week’s Nedbank VinPro Information Day.

She added she anticipates inflation falling “quite sharply” in South Africa.

“The only unknown, of course, is the rand,” continues Weimar. “If the rand depreciates very rapidly, even though oil prices are falling… then we might not see the full benefit of this lower oil price.”

The local currency is under pressure because of the perceived risk associated with investing in South Africa has risen – due to factors such as power cuts and labour unrest. As a result, the Reserve Bank will need to increase interest rates to continue attracting foreign capital, noted Weimar.

“Unfortunately we have no choice in the matter, we have to attract foreign capital because we are running a current account deficit – we import more than we export. We are very reliant on foreigner’s perception of our country as a result of that.”

South Africa’s imports of crude oil make up around 23% of its total imports, and a 60% fall in this price should help narrow the current account deficit. If the prices of the country’s exports were rising, or even stayed the same, the impact could be considerable. But, as Weimar noted, “unfortunately that is not the case”.

Slower growth in China and the drop in oil prices have had a ripple effect on other commodities such as copper and iron ore. In fact, prices of platinum, gold, coal, and iron ore – making up almost 35% of South Africa’s total exports – have all seen a decline.

Nevertheless, the oil price fall has been more dramatic. “This could help us. This could make a good difference over the course of this year, and we estimate that it will help shrink the current account deficit from 5.8% of GDP to only 4.5%,” highlighted Weimar.

“As the current account deficit narrows, our dependency on foreign capital declines, which should help the rand. So that will be a little bit of a supporting factor for the rand.”

Consumers may be winners

The IMF has recently lowered its forecast for South Africa’s growth in 2015 to 2.1% due to the fall in commodity prices. This is down by 0.2% from its forecast in October 2014.

Weimar predicts oil prices should start to rise again around July/August. But until then, South Africa’s economy should benefit from the drop, especially in the face of power and labour challenges.

“So if we are looking forward, South Africa should do better this year. The main boost, interestingly enough, is going to come from consumers who should benefit from these lower inflation numbers, lower fuel costs… and increased disposable income.”