In the early 2000s Kenyan entrepreneur Lizzie Wanyoike started a business college in Nairobi offering diploma and certificate courses. At the time Kenya just had a regime change, the economy was improving after decades of stagnation, and the private sector was expanding. 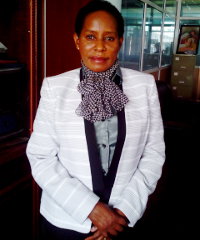 There were only about a dozen universities in Kenya and most offered degree courses only. Wanyoike saw a gap to provide business-related diploma and certificate courses. She was also motivated to venture out on her own because a business partnership she’d been involved in had ended.

“When that partnership broke I desperately needed to do something. I desperately needed to succeed,” she says. So she hired two teachers, rented space and started the Nairobi Institute of Business Studies (NIBS) with 25 students who transferred from another college that was winding up. The college has been a success, and is now on track to become the first woman-owned university in Kenya.

The transition of NIBS into a university began a few years back, and the process is now in the final stages with expectations it will be chartered next year.

“There were many reasons in deciding to become a university. We were doing very well as a college in the days when universities were not offering certificates and diplomas. It was not difficult to get diploma students as long as you delivered quality training. But today there is more competition,” she says. “Additionally, when universities became more commercially-minded enterprises, I realised the standards were dropping.

“As a result we have so many degree graduates who cannot do the jobs they’ve been trained for. A degree can be just a paper, what matters is whether or not you can deliver.”

The process of becoming a university has been long and challenging but Wanyoike believes it is worthwhile to ensure quality education.

“You also need to have a lot of money. We are not talking about a few millions; we are talking about Ksh300m to Ksh500m (about $3.5m to $5.5m), so one needs the support of a bank. We had to build a track record and be in a position to convince a bank to offer that kind of support. We are now working on the final details and preparing for the final inspection. We could be a university anytime next year.”

Along her journey in entrepreneurship, Wanyoike says challenges have always opened her eyes to opportunities and spurred her into action.

She narrates how in 2003 NIBS relocated to a new building because the college had outgrown its first facility. However, three months into the new lease, the landlord wanted to throw her and her 1,200 students out. And for two years NIBS and the landlord engaged in a court battle over the matter. NIBS won the case and was allowed to continue using the facility until the end of the lease, but the experience was eye opening.

“It was a very traumatising, but for me bad experiences and challenges have been very good teachers. If they’d not tried to kick me out maybe I’d have comfortably stayed there and continued renting classroom space. I’d have continued helping other people pay their mortgages. But when I realised that you can be thrown out in the cold when you least expect, I started looking for land.”

NIBS later purchased a 10-acre parcel where it has developed its main campus. She adds it is important to “take every challenge as a lesson” and also to be forgiving so as to “not get stuck in the past”.

From teacher to business owner

From an early age Wanyoike always wanted to be a teacher, and she attributes her many years as one, and later as a college principal, to the success of NIBS. “I was very devoted to my work even though I really didn’t need to because I was then married to a rich husband. But I would report for duty very early even when others showed up late. As a result I gained lots of knowledge and experience which I later used when I started NIBS. Even today I don’t take my work for granted,” she says.

The NIBS principal and CEO says her good record as a teacher and college administrator came in handy when she started her college. “I did not just teach my students. I mentored them and helped them get jobs and internships. When I started NIBS I used my photo to advertise the college. I sold my face, my own brand, because I was confident that when people saw Lizzie they would want to enroll. And today the people I taught years ago bring their children here because of my goodwill.”

Over the last decade NIBS has diversified to include studies in tourism and hospitality, community development, computer sciences, engineering, law, and journalism and media studies. However the students are taught and encouraged to ‘think business’ regardless of the programme they undertake.

“Everything is business. Whatever profession you are in, you can still open a business in that field. Even if you don’t do it today you can still go into business after you retire. After all, at 55 most people are still energetic enough and need money because they probably still have children in university.”

Wanyoike adds she finds fulfillment in making other people happy, speaking to young people and mentoring them. “I don’t want to do things that only benefit me. I want to benefit others as well. For instance I sponsor 20 students at NIBS and I have adopted many more in high schools.

“I am not a paid motivational speaker. Everywhere I go I speak for free because I am really passionate about the youth. I keep telling them the only way they can be financially stable now, and in future, is to make sure they get a good education. Everybody can take everything from you, but they cannot take what is in your head. Even if they burn your certificate, you will still have the knowledge and skills.”