“Success does not come in one day. I see youth come in with ambitions of becoming the manager the very first day,” says Jennifer Riria, CEO of Kenya Women Holding, the parent company of microfinance provider Kenya Women Finance Trust (KWFT). 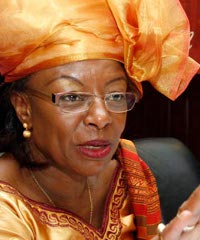 She notes that young people often make the mistake of giving up too soon.

“When I joined KWFT as managing director, I swept my own office, I made my own cup of tea, I opened and closed the office and I delivered. Now if you asked me where accounts is I would say I have no idea. It takes time; it’s like wine, it gets better with age. You have to be committed to the course,” explains Riria.

In 1991, Riria left a job at the UN to head KWFT, then an insolvent microfinance institution targeted at poor and rural women in Kenya. The organisation had millions of shillings in uncollectable debt and was “shunned” by everyone, from government to donors.

Riria was recently announced as the Kenyan country winner of the 2014 EY World Entrepreneur of the Year award.

She notes that entrepreneurs should expect to make mistakes and be willing to own up to their failures, and move on.

“Have the humility to accept your failure so that you can use that as a basis as you move on. I never say I have a problem, I say I have a challenge. A challenge is like a pearl [which] grows in an oyster and it is an irritant to the oyster but when they come out they are precious. So you, as an entrepreneur, must find out what your pearls are. I use challenges as a basis to springboard to a better standard.”

Riria adds that successful entrepreneurs are courageous, good managers and sincere. They also know how to harness resources, including ideas from other people, and have the ability to stay on track, even during tough times, until they “hit the bull’s eye”.

“You need to believe that tripping is not falling. You trip, you get up and you move on. Sometimes you break a toe, you wrap it and you move on,” she advises.