Apapa is an industrial hub in Lagos, Nigeria’s bustling commercial capital that’s home to some 17m people. Daily, the air in Apapa reverberates with the humming sound of electricity generators. In Apapa, as in most places in Nigeria, electricity generators power big factory plants and air cooling systems, as temperatures often top 30°C. 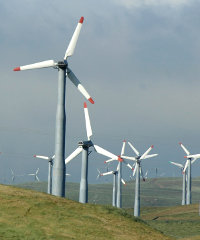 African countries are increasing looking to generate energy through renewable sources such as wind.

Nigerians expect the Power Holding Company of Nigeria (PHCN), the entity charged with managing electricity production and distribution, to end decades of erratic energy service delivery. Despite national efforts to tackle the power crisis, half of Nigeria’s 170m people have no access to electricity. Hajiya Zainab Kuchi, a former Nigerian energy minister, once said: “We must resolve to jointly exorcise the evil spirit behind this darkness.” And Nigerians derisively refer to PHCN as “Please Have Candles Nearby”. Candles can be handy when there is a power outage at night. Before PHCN, there was the National Electric Power Authority (NEPA), which performed so badly that it was itself nicknamed “Never Expect Power Always.”

But Nigeria needn’t be in a precarious power situation, argues Kandeh Yumkella, the Special Representative of the UN Secretary-General for Sustainable Energy for All, an initiative to mobilise resources for energy especially in the developing world. The country is endowed with 5tr cubic metres of gas reserves – the ninth highest in the world – and 37bn barrels of oil reserves, according to the Organisation of Petroleum Exporting Countries. Yumkella says Nigeria alone could potentially provide electricity for the whole of Africa. In addition to oil and gas, the country has coal, wind, thermal and sun – all sources of energy.

The Liberian power situation mirrors that of Nigeria. Rebel fighters destroyed Liberia’s energy infrastructure in 1990 and it was not until 2006 when streetlights were restored. “For more than 14 years, Liberia has lived in darkness, literally and figuratively,” wrote the New York Times in 2006. With financial assistance from the US government and the European Union, Liberia purchased a plant to supply power to the main hospitals and to streetlights. “We have brought back what we finally call light at the end of the tunnel,” said a visibly enthused President Ellen Johnson Sirleaf, as she switched on the streetlights at an elaborate ceremony in July 2006.

“The cost of alternatives, mainly diesel generation, is at least four times the cost of a reliable power supply,” notes the Guardian, a UK newspaper. Industries cannot be competitive in the international market if energy is a big chunk of production costs, adds Yumkella. “It means somebody can buy your raw materials, take them to Asia or Europe, refine them and sell back processed goods to you.”

Reliable energy doesn’t just pertain to industrialisation, says the World Bank; it can be a tool to tackle poverty. With a steady flow of power, hospitals operate efficiently, people will choose gas cookers rather than wood or coal that pollute the environment, students can access the internet and plug into global information trends, railways operate efficiently, water supply is more reliable, bureaucracy runs efficiently – virtually everything relating to socio-economic development revolves around energy.

Yet, 48 countries in sub-Saharan Africa generate only 68,000MW of electricity, which is what just one country in Europe, Spain, produces, notes the World Bank. And of that figure, South Africa alone generates more than 44,000MW. This means that without South Africa, sub-Saharan Africa’s electricity output is 24,000MW, far less than 40,000MW available in New York City. To compound matters, “the low level of power generation is accompanied by correspondingly low rates of electrification. Less than a quarter of the population of sub-Saharan Africa has access to electricity,” says the World Bank. In brief, “Africa is the world’s most energy insecure continent”, says Yumkella.