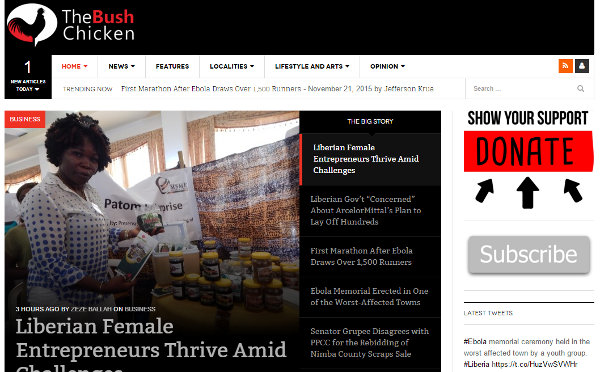 The Bush Chicken is a Liberian online media outlet that seeks to set an example which will spur the local press, known for low standards of ethics and editorial oversight, toward greater accountability and the production of high quality content.

The Bush Chicken was founded by Jefferson Krua, a civil engineer by profession who spent the majority of his life in the US after fleeing Liberia’s civil war at the age of five. Jefferson returned to Liberia earlier this year in order to more effectively oversee the growth of The Bush Chicken. He talks with How we made it In Africa on lessons learnt operating a media house in a country that has traditionally held little regard for press freedom.

Give us an overview of your business.

I started The Bush Chicken out of a frustration of the many problems I saw with journalism in Liberia. Articles often reflected a poor command of the English language and the rural parts of Liberia were largely ignored from daily reporting.

The Bush Chicken name is inspired by both the inclusive coverage of rural communities and the idea that the outlet will serve as a wake-up call to important issues.

How did you finance your company?

Because it doesn’t take much money to start an online newspaper, I provided most of the financing for The Bush Chicken. My uncle and business partner also contributed.

I believe that the state of journalism in Liberia is the way it is because of the lack of investment in journalists. I’ve been at government press events where reporters were offered cash. It’s often done innocently in an attempt to help the struggling industry, but it can undoubtedly create a conflict of interest.

I would therefore increase pay for my current journalists to $400-500 per month (the industry standard is about $120) and hire additional people to work on the time-consuming investigative journalism pieces that we can’t currently do due to limited resources.

I would also fast-track our expansion to all of Liberia’s 15 counties.

Lastly, I would start printing a paper version. I have avoided that because printing and distribution take too much time and resources; I want to focus on content right now. Unfortunately, the internet is still not the best way to reach most Liberians.

What risks does your business face?

In Liberia, libel is a criminal offense, as opposed to a civil one, and courts can award unreasonable amounts of money to victims. In at least two cases, the courts have awarded victims of libel at least $1m. Because of this, we retain a lawyer and maintain connections with noted promoters of press freedom. We have also ensured that we are training our reporters against writing any articles that could contribute to bringing a libel lawsuit against us.

So far, what has proven to be the most successful form of marketing?

In terms of reaching readers, Facebook has been the best means. As an online newspaper, it makes more sense to advertise online than to pay for a billboard or radio ad. We initially started advertising through a variety of online platforms, including Google and Twitter, but those were far less effective than Facebook. In fact, most of the comments on our articles are actually written on our Facebook page, as opposed to directly on the article.

Describe your most exciting entrepreneurial moment.

Seeing the impact of our work has been the most exciting moments of running The Bush Chicken. The first moment came when Tubman University wrote us after we published our article ranking Liberian university websites to tell us they had improved their site to incorporate many of our suggestions. We also published a piece on a false advertisement that spurred the Ministry of Commerce to launch an investigation into the importer of Tsingtao Beer, who claimed that the beer would make consumers lose weight.

Ultimately, moving back to Liberia and getting to experience the country in person has been truly exciting. It’s one thing to sit in the US and critique what happens on the ground but I don’t think that allows you to give fair analyses. I’ve been able to experience what it’s like to wait up to two hours for public transportation, I’ve walked through Monrovia and seen the real sanitation issues we face, and I’ve experience the frustration with public utilities. Experiencing these shortcomings has helped me to better orient our work to provide quality journalism that will positively transform Liberia.

Tell us about the biggest mistake you’ve made, and what you’ve learnt from it.

When we initially started, the leadership team consisted of a bunch of people living in the US, so we had different expectations of staff behaviour in Liberia. The result was that we struggled with production at various points. When you don’t have a new article on your website, it looks stale.

When I returned to Liberia, I met with the owner of a local newspaper and observed how he ran his operations. We retooled our policies based on lessons from him to the point where we now get a consistent stream of articles without having to prod our journalists.