It’s Wednesday afternoon and a group of teenagers are quietly chatting and laughing as they enjoy cups of frozen yogurt in Ethiopia’s capital Addis Ababa. Established November 2013, Yogurt-Inn is the first frozen yogurt store in Ethiopia. 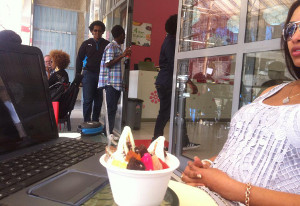 Although Ethiopia is not as westernised as other African countries, Yogurt-Inn manager Dagmawi Kesate says as people get more disposable income, they become willing to adopt new products.

“And frozen yogurt is one of the new things the city has to offer. I truly believe Ethiopia is at the cusp of change, socially. People are willing to try out new things if you adapt it to their social understanding. But if you have a concept from the US and dump it just the way it is, it won’t work because we have a different culture,” he explains.

When Yogurt-Inn launched there was a lot of buzz about it, then it slumped and was branded “expensive”. But now the business is gradually re-building its customer base from the ground up.

Kesate recalls that when the store opened they made mistakes because they had no background in the food business. Their consultant, a foreigner, also lacked an understanding of how Ethiopian consumers behave.

“When you open such a business you need to understand the psyche of Ethiopians,” the engineering graduate believes.

“Our chairs [for instance], are not designed for people to sit on for hours. The house is designed for you to ‘pick it up and go’. Now this works in a society where people have things to do and places to go. But a major entertainment for Ethiopians is cafes where they can sit down and talk. Our store was purposefully designed for customers to leave within 30 minutes. That is a wrong concept in this country.”

Self-service, a new concept for businesses here, has also proved challenging. Yogurt-Inn offers eight flavours of yogurt and over a dozen options for toppings from chocolate to fruits. In the typical buffet culture of piling up plates, some customers would load their cups to overflowing, unaware they would be charged per gram.

“The cups are small but if you put in a lot, it will cost a lot of money. So a kid would put in eight flavours of yogurt and all the toppings, and by the time they get to the till it weighs 700g. So that alone gave us an image of being expensive, even though we are not,” explains Kesate.

He says they had to educate clients about portions and pricing, often a delicate act because it is easy to offend.

“You don’t want to do it in a way that makes someone think you’re assuming they don’t have money!”

“The social structure of Ethiopia is about to change. Today’s teenagers will the middle-income work force in 10 years. They have been so westernised that they no longer even speak Amharic properly,” he notes.

However, investors should understand the uniqueness of the Ethiopian culture, which affects buying decisions. He cites the popularity of the coffee drink macchiato, adding that towards the end of the month, as people become more cautious with their spending, they will do without desserts, even lunch, but not macchiato.