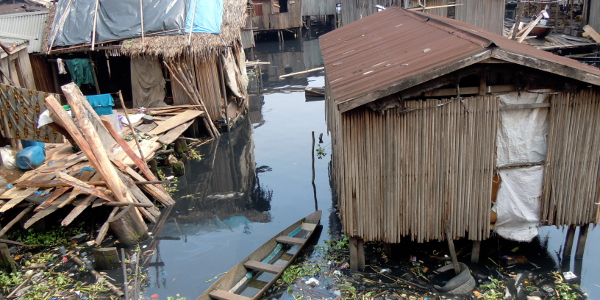 Approached at night, Lagos is a dull mass lit by the glow of countless cars. Locked in queues, their headlights slice apart the city like a knife. “You see that?” an air stewardess says looking out of the window as her flight comes in to land. “That’s traffic. Welcome to Lagos.”

Lagos, which calls itself a “centre of excellence”, is a megacity with problems. The exact population is unknown; Nigeria’s headcounts have always been hijacked by politics. The state government claims the figure to be over 21 million. The UN estimated a 12.6 million population in 2014. Either way, Nigeria’s commercial capital is almost certainly the largest metropolis in Africa. Governing the eponymous state is no easy task.

Loud, dirty, unashamedly urban – that’s Lagos. Potholed roads are packed with SUVs and battered buses. Tailbacks start well before dawn and last long into the night. Electricity supplies are appalling, crime rates are high, and road safety is abysmal. Sometimes victims of crime are left dead on the street. Wealth disparities are glaring. An 11km bridge separates upmarket Ikoyi from a seething water-based slum, Makoko, whose residents eke out a living as fishermen.

Bola Tinubu, the first of three state governors since the end of military rule in 1999, remembers a time when things were a lot worse. “Lagos, when we took over, was a slum,” he recalled from his residence in Ikoyi. “The traffic was extremely chaotic. There were mountains of refuse all over the state. The civil service was unprofessional. There was no control of revenue, no accountability. There was disintegration of infrastructure. No police officer respected the rule of law. It is very easy to forget these things.”

Major improvements were undertaken by Tinubu and his successor, Babatunde Fashola, a former lawyer who served eight years as governor before the national elections in March last year. Under their watch traffic lights were installed, markets cleared from roads to reduce congestion and levels of serious crimes reduced. Orange-clad street cleaners cleared away rubbish. Feared officers of the Lagos State Traffic Management Authority (LASTMA) improved the flow of cars.

And the city’s economy has thrived. Lagos is home to a more visible middle class than most of the rest of the country. Its children are more literate, and more likely to attend school, than those in any other Nigerian state, according to a 2010 literacy survey.

These advances were achieved despite often frustrating relations with the federal government. Last year’s presidential vote was the first democratic transfer of power in 16 years, and until then Lagos had been in the hands of the opposition. Both former governors say their reform efforts were impeded by a dysfunctional national leadership. “There were things we wanted done that we couldn’t get done,” Fashola said, citing slow reimbursement of the state for maintenance of federal roads and failure to sign off on projects, including a forensic laboratory.

Yet this taught the state to become self-sufficient. It built better financial management systems to gather tax revenues from companies targeting Nigeria’s huge oil wealth and population. At over US$90bn, Lagos’ GDP is bigger than that of most African countries. In 2014, its internally generated revenue exceeded that of 31 other Nigerian states put together, according to the National Bureau of Statistics.

The greater efficiencies and stable income shielded Lagos from an economic downturn linked to lower oil prices. “The Lagos state government generates over 75% of its revenues from local taxes and is therefore less dependent on statutory transfers from the cash-strapped federal government than most Nigerian states,” explained Malte Liewerscheidt, senior Africa analyst at Verisk Maplecroft, a United Kingdom-based consultancy.

This means that, unlike other states, it has not had to turn to the federal government for a bailout to pay its workers. For years it has attracted migrants ready to hustle day and night for their riches. Spokespeople in the office of the new governor, Akinwunmi Ambode, claim that thousands more workers are flocking to the city as public salaries dry up in other regions.

“Lagos is a model in terms of what investment can do,” says Ifeanyi Peters, programme manager on the UK Department for International Development-State Partnership for Accountability, Responsiveness and Capability. “It has been an example for the federation in terms of running an efficient government.”

Yet successive governors have been dogged by allegations of fraud. Tinubu, who faced enduring accusations of drug trafficking, has been lambasted by opponents as “corruption personified”. His better-respected
successor was put under the spotlight when BudgIT, an analytics firm, uncovered a series of controversial contracts awarded by his administration.

These included a ₦78m (about $390,000) licence for the development of Fashola’s personal website and ₦1.18bn (about $9m) allocated to six pedestrian bridges. Civil society groups have asked the Economic and
Financial Crimes Commission to probe the former governor, who is now a minister and denies the charges, but the case has not progressed.

“To be fair, Lagos is better than other states for fiscal transparency, but contracting is still not independent enough,” says BudgIT’s co-founder, Oluseun Onigbinde. The state makes its budget public and has passed a law requiring competitive bidding, but this does not apply to contracts worth less than ₦100m (about $500,000), says Peters at SPARC. “I’m guessing at only 50-60% compliance on paper,” he adds.

As a former accountant, Ambode has the credentials to further boost the state’s internal revenue and improve transparency. Since coming to office, the new governor has launched a single treasury account for government
revenues. Replacing a largely untracked web of bank accounts should theoretically reduce fraud. His team also thinks they can capture tax from millions of Nigerians who currently do not remit to the state.

Yet in other areas the new governor has faced teething problems. Traffic worsened during his early months in power as a result of his reducing the powers of LASTMA by restricting its officers from impounding cars, prompting robberies on cars stuck in queues. “It is like there is no governor at all,” lamented one driver at the time.

More recently, Ambode followed in the footsteps of his predecessor by demolishing unruly marketplaces. That caused complaints from traders with little other source of livelihood. “I try to create a civil society where things
are done professionally,” he stated in a recent radio interview, but his critics claim that he is still “learning” how to govern.

He must do so fast. An economic crisis looms in Nigeria. His biggest challenge will be navigating it.

Eleanor Whitehead is the Economist’s West Africa correspondent, based out of Lagos. This article was originally published on Good Governance Africa.