Drivers in Kenya’s capital Nairobi experience significant pain and frustration in their quest to find a parking spot, according to IBM’s global parking survey.

The survey shows that drivers in both developed and emerging economies experience the same parking frustrations.

Nairobi ranks in 13th position out of a total of 20 cities. Chicago had the least pain when it comes to parking in the cities studied, followed by Los Angeles and Toronto. New Delhi ranks at the bottom. Johannesburg, the only other African city included in the survey, fared better than Nairobi, ranking in 8th position.

Globally, drivers have spent an average of nearly 20 minutes in pursuit of a coveted spot. African drivers averaged both the shortest and longest times searching for parking in the last year when compared to the other 18 cities – Johannesburg averaged 12.7 minutes and Nairobi averaged 31.7 minutes. 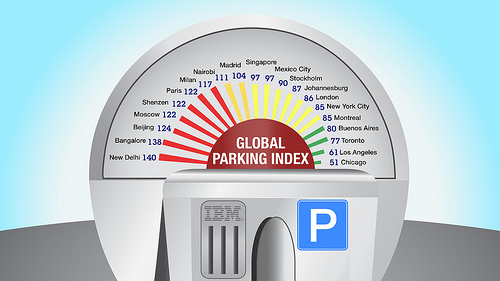 13% of drivers in Nairobi reported driving around for more than one hour for a parking spot within the last year. On the other end of the spectrum, citizens in Chicago (28%), Montreal (24%) and Stockholm (24%) fared much better, finding a spot in less than five minutes.

Drivers in African cities have also received less parking tickets compared to many other regions. “Nine in ten respondents in Madrid and Johannesburg reported that they had not received a ticket for parking illegally within the last year, significantly above the global average. Chicago, Los Angeles and Nairobi closely followed,” notes the report.

It is estimated that more than 30% of traffic in cities is caused by drivers looking for a parking position. “Not only do inefficient parking systems result in congestion and increased carbon emissions, they also waste commuters’ time, lead to lost productivity and economic opportunities and can lead to inefficient city services,” said IBM in a statement.

“Clearly, drivers worldwide are facing frustration and pain, not only during the daily commute, but also when searching for a parking spot,” said Vinodh Swaminathan, director of intelligent transportation systems, IBM. “It’s easy to see how this parking ‘pain’ can impact productivity of citizens and economic opportunities in a city. The ability to combine transportation information being collected with a better understanding of their citizens’ parking needs can help cities not only better match parking supply with demand from commuters, but also better anticipate and avoid gridlock and make significant inroads to reduce congestion.”