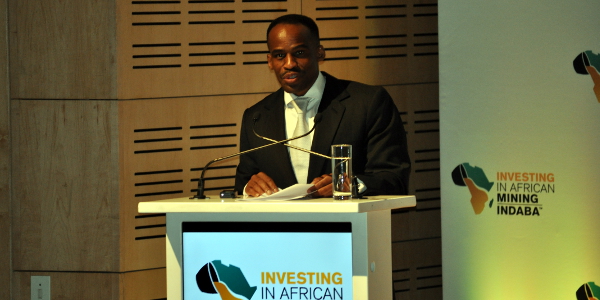 Kgosi Leruo Molotlegi, King of the Royal Bafokeng Nation, speaking at the 2016 Investing in African Mining Indaba in Cape Town.

“There is little corporate will from most businesses that are mostly foreign-owned to transform the structure and model of the South African mining industry.”

This is according to Jimmy Gama, treasurer of the Association of Mineworkers and Construction Union (AMCU) in South Africa. The mining union, responsible for the five-month long strike that hit the country’s platinum industry in 2014, is set to begin wage negotiations in upcoming weeks – during a time where low commodity prices and rising costs have resulted in mine closures and layoffs.

Speaking at the sidelines of last week’s Investing in African Mining Indaba in Cape Town, Gama said there is little incentive for mining companies to diversify the industry and beneficiate locally. He argued if local industries were developed in communities surrounding the mine, they would be less vulnerable to external shocks that can result in mine worker layoffs.

The issue of how to protect the interests of local mining communities – and the role companies and government should play in this – also made its way onto the agenda at the Indaba.

One panel discussion – titled ‘Creating opportunities for local and economic diversification beyond the life of the mine’ – looked at whether mineral rights should be held by local communities or by central governments. And if they were to be held by government, what mechanisms can be put in place to ensure communities benefit from their resources and are protected from adverse mining effects?

One of the speakers included Kgosi Leruo Molotlegi, King of the Royal Bafokeng Nation. The monarchy, covering 1,000km of the platinum-rich North West Province of South Africa, is unique in that it holds mineral rights. Its investment arm Royal Bafokeng Holdings (RBH) has investments in mining companies Impala Platinum Holdings and Royal Bafokeng Platinum, with mining assets making up over 40% of its portfolio.

According to Molotlegi, the Mineral and Petroleum Resources Development Amendment Act (MPRDA) imposed by the South African government to reduce the structural subordination of mining communities, has not made communities more resilient. He argues its mandatory Social and Labour Plans (SLPs) – which increases the involvement of mining companies in the provision of basic services – have actually resulted in less involvement by the state, leaving these communities even more dependent on the miner.

However, he noted there are some simple action steps that should be deployed to help avoid creating unintended consequences of the Act.

Firstly, all SLPs should be made public on a single website so that everyone, including community members, can see each SLP’s deliverables – along with key performance indicators in timeframes. “You should also include a community feedback mechanism so that beneficiaries and others can contribute,” he added.

“We have a similar online system in our administration which we track all our projects and programmes, so it’s not too difficult to design and maintain.”

Secondly, there should be a clearly defined set of services that are only provided by the government. “Contribution by the private sector, such as mining companies, should be above and beyond these basic services,” he continued.

Finally, at every mining-related discussion there must be representation from mining communities. “Governments, miners and communities can improve local environments together, but never in isolation.”