Since last September’s shooting at the Westgate shopping mall in Nairobi, which killed at least 67 people, Kenya has experienced dozens of terrorist attacks on churches, hotels, buses and police stations, which has instilled fear in people and crippled many businesses. 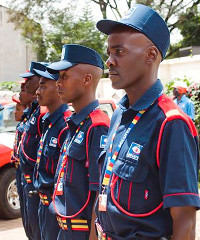 Since the Westgate mall shooting, demand for private security has increased.

While militant group al-Shabaab claimed responsibility for some of the attacks, local criminal gangs and politically motivated individuals are also involved in the violence. The security situation has deteriorated so much that the government has urged football fans to watch World Cup matches from home instead of public places like bars and restaurants that could be terror targets.

In the midst of all this, the private security industry has been flourishing as more companies and property owners hire guards and install security gadgets.

Today in Kenya one will find heightened security in most crowded areas, including churches. At the bus station, conductors temporarily become security guards as they screen passengers getting on board. In Nairobi’s affluent suburbs, home owners use the services of guards, trained dogs and high-end equipment.

More than 300,000 people are employed as security guards by private companies in Kenya, according to James Omwando, CEO of KK Security.

The number of private security firms in the country range between 2,000 and 4,000, depending on who you speak to. Key players agree that since the Westgate attack, an unprecedented number of new security companies have been established by local entrepreneurs and ex-servicemen of Israeli, US and European descent.

“Westgate was the trigger for anybody who hadn’t previously thought… to hire a security company,” says Ashley Myers, director of operations at security company Wells Fargo.

KK Security boss Omwando agrees, adding that his company, which he says holds more than 70% of security contracts for embassies in Kenya, received many request from its clients to increase manpower and install additional equipment in the aftermath of the shopping centre shooting.

“After Westgate we hired more people [because] we got some additional assignments like at [a regional brewery] where they needed about 300 security officers,” says Omwando. KK Security, which has 9,000 guards in Kenya, recruits and trains continuously, and holds a passing out parade every Saturday where 60 to 100 new security guards graduate.

“We have seen a huge increase [in requests] in the last six weeks for sniffer dogs to detect explosives in hotels. We can’t cope with the demand for sniffer dogs and everybody wants them,” says Sahni.

Kenya currently spends between US$50m to $100m annually on security equipment, according to Amar Taylor from AUA Industria. Although demand for world-class security systems has increased, the associated high costs make it unaffordable for many organisations.

“To be honest if you want to do proper security it is quite a significant cost, especially for the hotel industry which is suffering as it is in [the coastal town of] Mombasa. But…what is expensive? Is it expensive to have your hotel blown up or is it expensive to pay for the sniffer dogs and uplift your security?” says Sahni.

Contributing to the economy

Christopher Everard, chairman of the Kenya Security Industry Association (KSIA), says the sector is a key contributor to the economy. Everard is also the general manager of Ultimate Security, a company that provides residential property guarding to 2,500 families.

“The private security industry is the biggest employer… in Kenya. I would say it is bigger than the car industry and even the tourism industry,” says Everard.

“We are large taxpayers,” notes KK Security’s Omwando. “If you put it into perspective, how many people we are feeding, you will be looking at our 9,000 employees supporting five people each. It’s a big number and that is just KK Security only.”

“At the moment the market in the security industry is saturated with new companies. If you want to start a reputable institution like the ones that are members of KSIA you will have to make massive investment to break into the market,” he explains.

Only a small number of private security companies in Kenya are duly registered, train their staff well and pay minimum wages. There are also accusations of undercutting, sexual harassment of female guards, and long hours with no overtime pay or holidays.

Stakeholders say “briefcase companies” that don’t operate by the book have always existed, but their numbers have increased in recent times.

“You have security guards who earn as little as Ksh. 7,000 ($80) to Ksh. 10,000 ($114). A lot of it has to do with unemployment because where there is stronger pressure on employment, people are willing to work for less than the government minimum. This is an industry where there is a great deal of opportunity for improvement of standards,” says Myers of Wells Fargo.

KSIA boss Everard reckons that “everyone has security at the top of their agenda” and this will remain so long after the threat of terrorism is neutralised. He adds that the police service, which is currently outnumbered by security guards, “will never be big enough to be able to offer citizens the security that the private sector can offer them”.

“Look at developed countries that don’t have al-Shabaab or any terrorist threats. There are very neutral countries like Belgium, Sweden or Norway… and they still spend a lot on security,” notes AUA Industria’s Taylor.

Looking ahead, Everard says the biggest challenge for the industry is maintaining close cooperation with Kenyan authorities and keeping up standards.