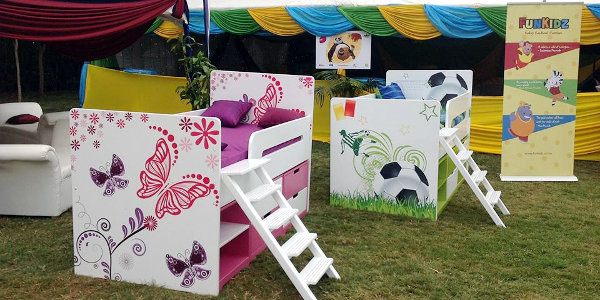 Many FunKidz customers are moving into an apartment or buying a home for the first time.

Wanjiru Waweru, a UK-trained interior architect and product designer, came up with the idea of starting a company dedicated to making kids furniture when she was pregnant with her first child.

“I walked around and couldn’t see anything I thought was suitable. There was a huge gap in quality, affordable products for children,” she remembers.

FunKidz, which today employs 30 people, started with just two employees and two machines at a small production space in Nairobi.

“Manufacturing is not for the faint-hearted,” says Wanjiru. “In the early days we couldn’t afford an [industrial] generator. There were times we would go for days without working because we did not have power. We couldn’t afford clamps, either, so we would use ropes to tie our products to glue them together. It has been a really long journey.”

The right people for the job

“We have disrupted the market a bit,” says Wanjiru. “Initially people were very surprised to hear that this furniture was being made here. They would ask to come to the factory and see for themselves.”

Wanjiru believes that manufacturing is key to Africa’s growth. She wishes that more people were entering the industry and that there was better government support for small manufacturing businesses.

But the biggest challenge she faces is finding skilled workers. “If you look around you will see quite a number of idle machines, because we don’t have enough people to operate them. We close at 5pm and go home because everybody is tired. What factory closes at 5pm? We should be running two shifts, but we don’t even have enough people for one,” she says.

Wanjiru explains that part of the interview process is a one-week practical test where candidates have to demonstrate that they know how to use the equipment, and that most people don’t survive the week. “We use amazing German technology, but compared to what’s used in other parts of the world, our techniques and equipment are not even state-of-the-art. What students are taught are techniques from the ’70s,” she says.

To manage the problem, FunKidz has started offering in-house training for staff, but it’s time-consuming and therefore expensive, “Because it’s the customer’s time you’re training on.” But Wanjiru says that she has no choice – FunKidz won’t survive without in-house training.

FunKidz operates a retail store in Nairobi, and intends to expand by stocking at independent outlets. The company also works with distributors who handle sales in neighbouring Rwanda and Uganda.

“We want as many people who can afford furniture to buy from us. We believe we should be a household brand,” says Wanjiru.

She explains that many of her customers are moving into an apartment or buying a home for the first time. “They often say that they want to give their children what they did not have growing up. I remember that as kids we slept in beds that were made for adults. They were always brown mahogany or the dangerous metallic double-decker beds that we used in boarding school.”

Although adults make the purchases and will often be concerned about safety and functionality, Wanjiru says her products must appeal to children aesthetically, which is why they are colourful and interactive.

Besides furniture, FunKidz also offers programmes during the school holidays that teach kids about product design, robotics and other engineering concepts. Next month will see the launch of a new range of school furniture to be sold mostly to privately-owned schools, and the business is also set to start a bedding line. With Africa’s population growth, Wanjiru notes, the future presents endless opportunities for FunKidz.

“Our business is all about kids. Anything that we think is innovative and for children, we’ll do,” says Wanjiru. “In Africa we have many children, so we know that this business has its life cut out for it.”