In 2002, the frustrations associated with finding a good egg incubator to hatch chickens to sell and sustain his fledgling poultry business, drove Geoffrey Kago to invent one. So with around $6 he built one incubator, which marked the starting point of a poultry enterprise worth over $100,000 today. 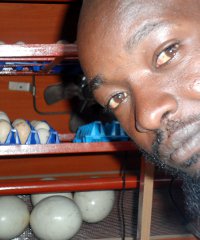 It has been quite a journey for the soft-spoken man who receives 50 to 100 calls daily from Kenyans in various regions interested in his signature innovation called the Kaki Incubator. The incubator is named after his company Kaki Village Enterprise. It’s one of the most popular of his innovations, which also include egg candlers (lights used to observe the growth and development of an embryo inside an egg). “Sales this year have gone up by 50%,” says Kago.

At the time of conceptualising his incubator, Kago noticed that most of the incubators in the market were designed for large scale hatcheries and unaffordable for smallholder farmers.

Besides making electric incubators, Kago has also developed kerosene powered units. For regions where there is abundant sunlight, he converts the incubators to tap into solar energy. The company is currently also in the process of developing incubators that can run on biodiesel, sourced from cotton, croton and castor seeds. In Kenya’s Mai Mahiu area, where there are 3,000 internally displaced persons (IDPs) due to the 2007 Kenyan post-election violence, Kago is providing them with castor seeds to plant on their small plots of land and in the neighbouring forest. He aims to be buying the castor seeds in the near future and provide IDPs with a source of income.

Loving the “sense of independence”

Growing up close to the rural Kenyan town of Nyeri, where his parents reared indigenous chickens, got Kago interested in poultry from a young age. In 1985, he bought his first chicken from his mother for $0.20. He was able to tend to it well and bred 200 chicks. From selling these chicks, Kago paid his high school fees from Form 2 to Form 4 at Nyeri High School.

“I loved the sense of independence,” he says. It was also in high school that the incubator innovation idea began budding, having experienced the challenges of traditional hatching with a mother chicken. An event which also spurred him to innovate was when a neighbour poisoned his chicken. The scaled-down versions of electric incubators he developed won him several prizes at high school science congresses.

To make ends meet after high school, Kago’s life took a different trajectory, almost drawing him away from his passion for poultry. In 1997, he went to Nairobi and settled in the Kiserian area. To survive, he worked as a stone mason and casual labourer. Later on he got work as an apprentice carpenter for two years in a funeral home where he learnt joinery. He got so skilled he could make pool tables.

The skills he learned from the funeral home proved priceless. He was able to join the dots when designing a viable working electric incubator in 2002. He bought the fittings needed for the incubator with $6 he saved from hawking cigarettes, his last job before re-entering the poultry business.

For Kago, his journey has not been without challenges. He is of the opinion that Kenyans are yet to appreciate local technology as the solution to boost industrialisation. He also says that banks make it difficult for small entrepreneurs to access credit facilities.

Kaki Village Enterprise currently has three branches in various parts of Kenya. At the age of 36, Kago is full of ambition and aims to start a unique poultry cooperative in the future. He is also a keen admirer of the Apple founder Steve Jobs.