When UK-born entrepreneur Mark Stephenson invested in Kenyan luxury bag manufacturer Sandstorm in 2007, he had never been to Africa before. An advertising professional with over 20 years experience, Stephenson found out about Sandstorm two years earlier and was convinced the small company had “enormous potential”. 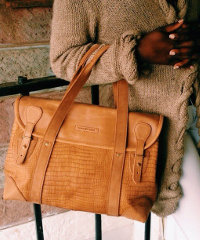 An example of Sandstorm’s products.

At the height of Kenya’s 2007/08 post-election violence, Stephenson continued to invest in the business and eventually relocated to Nairobi.

“I heard all sorts of horror stories on the media but I believed Sandstorm was still a fantastic opportunity.”

Stephenson explains that Sandstorm was attractive because it had a strong heritage of manufacturing in Kenya at a time when many other products were being made in Asia.

When Stephenson took charge at Sandstorm he changed the company’s focus from wholesale and international sales to the domestic and retail market.

“I felt that we needed to build a strong brand domestically before we tried to build a brand overseas,” says Stephenson. “I moved here in 2008 just as Lehman Brothers collapsed, so the world economy was in turmoil. Learning had showed us that if you sell in wholesale rather than retail you make about a third of the margin. Additionally, managing these outside relationships is expensive and time consuming.”

Today the company operates seven stores in Kenya and Tanzania.

Stephenson explains that cities such as Nairobi and Dar es Salaam have many affluent people willing to pay for high-quality premium products. He expects demand to increase in the future as local economies and disposable incomes grow.

Ultimately, Stephenson’s goal is to build a world-class Kenyan brand.

“Last month a Sandstorm bag was used to carry the diapers or maybe toys of [Prince George] the future King of England on his first overseas tour with his mum and dad in New Zealand. [The bag] was an engagement present from one of our customers here. I think that is something that Kenya should be intensely proud about.”

Sandstorm’s expansion to Tanzania was prompted by the fact that there was a “stronger early opportunity” compared to other neighbouring countries. However, Stephenson says he did face challenges.

“The real challenge is it takes… us a month to send anything [from Kenya to Tanzania] by road because of all the paper work [yet] in theory it is supposed to be an open border… and they still charge us a 10% tariff. That is disappointing.

“People ask us why we don’t call ourselves Sandstorm Tanzania in order to better fit in locally but ultimately we’ll always be Sandstorm Kenya wherever we are in the world because we’re a Kenyan brand and we’re intensely proud of this.”

Stephenson’s philosophy in business is to persevere through the hard times and avoid complacency during the good times.

“When things are going well I know that something going really badly wrong is around the corner so it’s about making as much headway and as much progress as I can before something unexpected happens. You can never sit back for a second. So persevere and attack.”

He says the last eight years have been a steep learning curve and his business has faced “typical small company growing pains”. The firm’s greatest challenge is managing growth in the right way. The company is adopting an enterprise resource planning (ERP) system that would give Stephenson and his management team greater control of operations and better focus on growth moving forward.

Although Sandstorm has received interest from customers in other countries, Stephenson says e-commerce will drive the firm’s expansion for now.

“We get lots of enquiries from Scandinavia and South Africa and so on. [However], I am quite conscious about adding complexity unnecessarily, particularly after the Tanzania experience. I think e-commerce for us is the way forward medium-term rather than physical shops.”