A Kenyan firm has discovered a way to turn plastic waste into a profitable business venture.

Lorna Rutto is the founder of Global Bio Energy, a company that manufactures fencing posts from recycled consumer plastic waste from Dandora, a slum in Kenya‘s capital city of Nairobi. 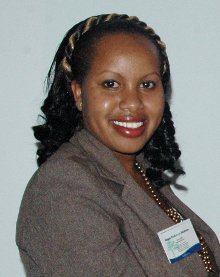 “Currently in Kenya thousand[s] of plastic bags and bottles litter our streets . . . and clog [our] sewers. Our business converts [this waste] into durable, affordable, cost effective and environmental friendly plastic poles,” Rutto explains.

According to Rutto, the initiative contributes to the environment by recycling waste and reducing the number of trees being cut-off. The project also creates employment opportunities.

“By creating an alternative to timber we can avoid an environmental crisis in future,” she says.

The project won Rutto, a 25-year old banker by profession, the WWF nature challenge national award that comes with a prize of 5,000 euros. She beat more the 120 contestants in the competition that attracted entrepreneurs with interests in organic agriculture, green energy production and waste management.

Rutto partnered with a friend, Charles Kalama, who was also previously unemployed.

She explains that once operational, the company will directly employ 24 individuals and create another 150 indirect jobs for waste collectors and garbage sorters.

“We are projecting being able to generate profits worth Ksh4.5million (US$58,000) per year once fully operational,” she says.

The biggest challenge facing the duo at the moment is the purchase of machines. Rutto asserts that the machinery used in setting up the plastic fencing poles extrusion plant is very costly.

Though they have purchased several machines and have set up a production plant at Kariobangi from the prize money, Rutto says that they need an additional Ksh4 million (US$52,000) to acquire other necessary equipment and become fully operational.

Rutto believes the business has potential because the only alternative to timber posts in the market are concrete and metal posts, but that these are too expensive. She adds that plastic poles are in demand due to their long term cost effectiveness since they require little maintenance and are durable as well as affordable.

“We are planning to increase our processing capacity, as well as introduce new products lines. These include roofing trusses, roofing tiles, support beams for low cost housing and plastic lumber for furniture making,” she says.