Kenya’s construction industry has boomed in recent years with the development of multi-million dollar commercial and residential buildings in urban centres. However the industry remains largely male-dominated. 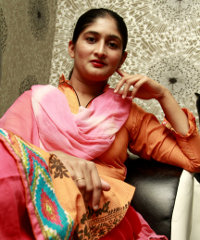 Rehmat Sumra teamed up with her husband last year to start Aayat Enterprises, a construction company in which she is the head of operations. This year the 27-year-old was recognised as one of Kenya’s ‘Top 40 Under 40 Women’.

Sumra says having lots of confidence has been handy in her career, especially when handling people suspicious of women doing what they consider ‘men’s work’.

“I do see a lot of bias in the construction industry but it is often something that can be overcome. The most I can do is explain to a client what I intend to deliver and how. It is up to the person who wants to give a contract to trust me. If they can’t trust me then I don’t even want that contract. I certainly would not want to work with someone who doesn’t trust me.”

Sumra has cut her teeth in another male-dominated industry since she was a teenager. At just 19 she became CEO of Roma Scrap Metal Dealers, a family business that supplies scrap metals to lead manufacturers and steel mills. She sells around 300,000 tons of metal per month which she explains as “a small drop in the ocean considering the demand”.

“If you look around you will be surprised by how many things are made of metal. There is a high demand but limited supply partly because a big steel mill would not want to deal with someone who is collecting 100kgs a day. And such a small dealer would also not want the bureaucracy of dealing with a big company, collecting payments by cheque and doing invoicing.”

As boss at Roma, Sumra has overseen the firm’s expansion and growth from a turnover of Ksh. 40m (US$450,000) a year to over Ksh. 400m ($4.5m) as well as contributed in improving the industry, for instance through the creation of policies and laws.

Learning business from a young age

She grew up like most girls playing with dolls, wearing bright clothes and reading Cinderella stories. But looking back, says her family background impacted on her career goals. Watching her parents run the family business drew her towards entrepreneurship.

“I loved going to work with my mum from as young as 13. Every time she would buy me a soda and sweet potato. So going to work with her was tempting to me because I knew I would get a reward. I did not know it, but was acquiring skills for my future.”

In the early days running the family business she faced difficulties handling deals gone wrong. “In the beginning I would take it personally, like it was my failure. But I came to realise that it can happen to everybody and the best you can do is learn from the experience.”

Additionally, there were few women to look up to. “I knew a lot of successful businessmen but not many women. Even in the Asian community I knew of men like Manu Chandaria, the billionaire industrialist… but had few women to identify with. Yes there were some, but their accomplishments were not being celebrated.”

She notes that solving Africa’s “role model problem” by celebrating successful women entrepreneurs is critical in getting young girls into traditional male-dominated industries.

“I think African women are the most hardworking the world over. There have been years and years of bias of making us believe we are not worthy of success. It is only recently that people have begun to accept women can perform just as well as men. The mama mbogas (roadside vegetable vendors) you see are often women who did not get a better opportunity because of stereotyping and general gender bias.”

She urges would-be women entrepreneurs not to listen to negative voices, be ready to learn from mistakes, build a support system and not shy away from being ambitious. “You need to have that drive inside you because at the end of the day, if you don’t want it you are not going to get it.”

In addition parenting also needs to change and children should not be pushed into traditional gender roles. For instance, the young mother explains she only buys her daughter ‘gender neutral’ toys.

“I don’t think along the lines of male and female. In fact I don’t understand why we have to fill out that question on most documents because what difference does it make? I wish I was an engineer at this point because there is opportunity, there is lot of scope, a lot of progression so you can grow really fast and there’s good pay as well.

“But engineering remains a male-dominated industry because we have instilled that bias in our children.”

She adds that although society perceives successful career and entrepreneurial women as “hardheaded” this notion is far from the truth. With a good support system women can excel both at work and at home.

Sumra lists confidence, an eye for opportunities and her ability to make sacrifices, as some of the reasons behind her success. And learning vital business lessons from her parents. She recalls how her father started Roma in 1994 after spotting unused bottles at a friend’s home.

“He knew someone else was buying used bottles so he negotiated pricing with the buyer and the seller, paid a transporter and after the deal went through he had made Ksh. 60,000 in profit. That is how he started with no capital at all!”

And her father, now a member of parliament in Kenya, taught her to “never take on a crooked deal”.

“I have really appreciated that lesson because when you start business it is difficult to avoid shortcuts, but in the long-run you come to realise they are never a permanent solution. Your reputation tends to take a hit if you are not honest and straight.

“Don’t always be plotting how you are going to make an extra buck by taking short cuts, or worse cheating, because they are not sustainable models.”