Two years ago, after resigning from her teaching job and when expecting her second child, Emma Forbes started looking for an alternative source of income. She made a few gift hampers for Valentine’s Day and sold them to friends. When her friends began asking for more products, she decided to invest the little money she had made in an entrepreneurial project. 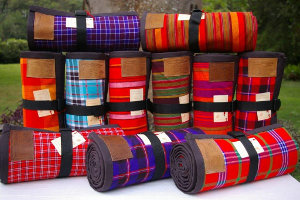 Emma and her husband George now run Shuka Duka, manufacturing a wide range of products, including picnic blankets, handbags, napkins, tablemats, scarves and iPad covers. All items are made using the shuka – a brightly coloured fabric worn by the Maasai people as decoration and protection.

“We focus mostly on the shuka. It hasn’t been utilised by any one company as its main focus point. We were looking at the shuka being a real part of Kenya and what represents Kenya and Kenyans and how we could turn it into a modern application such as bags and chairs,” says Emma.

Shuka Duka products are stocked at Nakumatt supermarkets, as well as at various hotels, lodges and camps across the country .

“The market is quite broad,” says Emma. “We get a lot of trade from the tourist market. We supply quite a few shops, lodges and hotels. We have a very popular domestic market as well; people who like going on safari or picnicking or putting their babies out on the blanket in the garden.”

Shuka Duka also exports to Tanzania, Uganda, the US and European countries such as Switzerland, Australia and Sweden, where “people like the image that it evokes of Africa and Kenya”, says Emma.

The duo complement each other’s skills. Emma handles the creative side of the business while George, who has “the occasional creative light bulb moments”, takes care of the administrative elements.

“The balance has enabled us to work pretty well together,” says Emma. “We are very compatible on that because we balance both each other’s skills. It is too much for one person to handle effectively.”

While doing business in Africa is challenging, Emma and George say it is also far more rewarding than running a business in the developed world. Emma is originally from the UK, while her husband was born in Kenya.

“The first thing is the love for living here. Emma would never really want to go back and live in the UK. The other thing is the potential. When you are doing something unique, to make a success out of it is actually greater than if you were in a first world market,” says George. “The beauty of being in Africa, being an emerging market, [is that] certain things have not been done in a country at all.”

“There is more opportunity here to get it right,” says Emma.

Running a business is no easy task, and George says you shouldn’t be in business if you can’t meet the challenges. “Anywhere in the world there will be challenges. Each country has its own unique flavour and Kenya has got its own. You have to be really adaptable.”

He also advises entrepreneurs to grow their businesses gradually and not seek to make profits overnight. “Rushing into things and trying to be big fast is recipe for disaster,” he says. “You have also got to realise that it is a long, long journey. Map out what your expectations are from this business… and strive for it. You have got to work bloody hard to get there.”

Entrepreneurs interested in manufacturing products should consider the turnover they would need in order to reach their overheads, advises Emma. To make a profit from products that sell at a low price, one has to sell huge volumes. Shuka Duka products sell for between US$1.25 and $100. “You have got to think in terms of volume. Is there a market to actually sell that much stuff?” says Emma.

Emma and George are currently focusing on expanding their business.

“Our main goal is to be a big exporter to the first world market,” says George. “We want to be a brand name, a Kenyan brand name that is recognised overseas. [We want people to say] I would rather have that than buy a Givenchy or Louis Vuitton [handbag, for instance].”

The pair says Africa has numerous opportunities that have yet to be exploited. Although the continent has a myriad of challenges, Emma and George feel optimistic about the future of Africa.

“The thing with Africa is that it‘s got that bravado. You know, people who stick their necks out; they want to get to their dream,” says George. “I think [there] is going to be a mini-revolution.”

“We wouldn’t be here if we didn’t think there was hope,” says Emma.