There has always been a large tea-drinking culture in Kenya, but over the last decade the popularity of coffee has grown steadily. Since the opening of the first Nairobi Java House coffee shop outlet in Nairobi in 1999, numerous others have emerged and are now a common feature in every shopping centre. 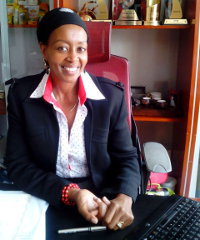 But even with the growing popularity of cappuccinos and lattes, Kenyan entrepreneur Flora Mutahi is still betting on tea.

For two decades now, the founder and CEO of Melvin Marsh International, has been processing flavoured and herbal teas for sale in the local market. She recently opened their first tea café, Melvin’s Moments, in an upscale mall in Nairobi, selling specialty teas, tea smoothies and tea shakes.

“For most Kenyans, tea is an at-home drink so when they go out they want something different. That is why we want to make tea funky,” says Mutahi.

But this is a new territory for Mutahi who stumbled into the tea business in 1994. She describes starting Melvin’s Moments as going back to “being a real entrepreneur”.

“I think monotony can kill entrepreneurship,” she says.

Spotting a gap in the market

Her interest in the food sector was ignited when she worked for an auditing firm that serviced clients in the food processing industry. She made frequent visits to manufacturing plants and became “fascinated by the idea of creating things”.

Six months into the auditing job, Mutahi quit and ventured into the salt business. One day as she delivered her product at a local supermarket, the purchasing manager mentioned tea and the opportunities in the industry. In the early 1990s the local tea market was liberalised, creating an avenue for new players. Mutahi did her maths and realised she’d make bigger margins trading in tea compared to salt.

She identified a gap in the market: ready ginger flavoured tea. Her favourite after-work drink was ginger tea, and the only way she could make it was to boil the ginger and make the mix at home.

In 1996 Mutahi launched Melvin’s ‘Tangawizi’ Chai, the first flavoured tea brand in the Kenyan market. But it took a long time for people to accept it. Not only did she had to deal with competition from a company that had been in operation for decades, but multinationals such as Unilever had also entered the market.

“People asked me why I thought I could succeed against such big players. I was naive. I did not think of them as competition. I have this ability to just black out everything else and go forward. I believe in differentiation so I looked at my habit, which was taking tea with ginger,” she explains.

The slow uptake did not discourage her. “The thing about innovation is your have to change people’s minds. I did not have finances to market my products so we used guerrilla marketing tactics. Eventually people started trying our products.”

Although Melvin Marsh never cracked the plain tea market, which is dominated by bigger players, it has carved a niche in flavoured and herbal varieties.

“Younger people are requesting even more flavours so it has become very competitive. This is the 21st century; people don’t want mainstream, they want variety,” says Mutahi.

Steering the business through tough times

She says she has faced several challenges such as accessing financing. As a result, at times she wrote cheques that could not be processed because the company had insufficient funds.

“Fortunately the banks were charging just $1,60 as a penalty for bouncing cheques. I remember one day I bounced five. I knew they would but I needed to pick up my product from the packaging company to then go and sell it, and they wouldn’t otherwise give it to me. It got me time to move, then I would go back later and make good,” Mutahi recalls.

She also admits learning management skills had been difficult.

“Experience is the most expensive way to learn. I also had people issues. You have to keep your sales team highly motivated while at the same time fighting with the bank. Yes, it has been challenging, but also a very interesting journey.”