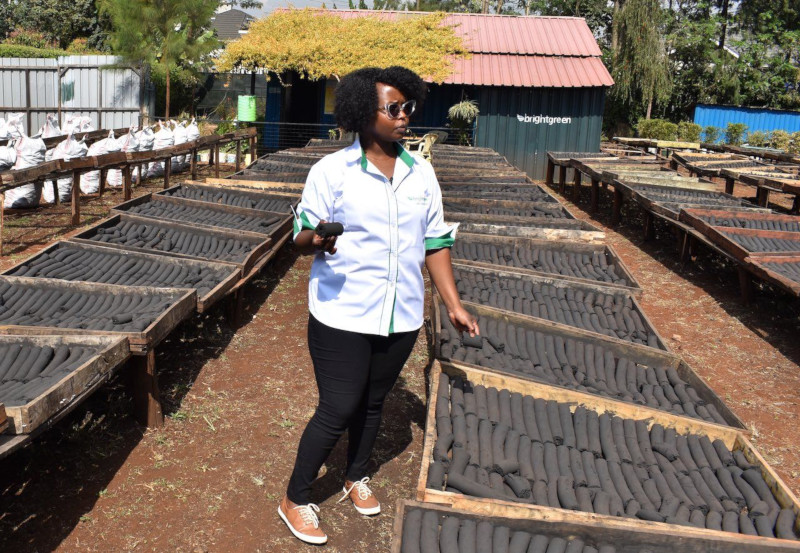 It is early morning in Nairobi and there’s a chill in the air as smoke drifts up from an eatery perched between a busy street and a stone boundary wall. Inside the eatery, a woman hawks tea and the local breakfast speciality, a spicy, doughnut-like wedge called a mandazi, to patrons who duck in and out from the street. From several floors above, in a modern, beautifully turned-out apartment, Chebet Lesan eyes the woman below.

Lesan is standing on the balcony of her apartment, deep in conversation on her mobile phone. The call is important. Chebet needs to keep tabs on deliveries to and from the factory she runs. Inside her kitchen, a coffee machine whispers and an intoxicating aroma fills the room. Lesan doesn’t notice. She has other matters on her mind.

“Please remind me, today we must introduce our briquettes to this kibanda (food booth) lady. The smoke will ruin her,” she says, looking down at the street.

Lesan is the founder of BrightGreen Renewable Energy Limited. The company produces fuel briquettes from upcycled farm waste, or biomass. The briquettes provide an alternative source of clean-burning energy to firewood and charcoal. The innovative fuel briquettes are affordable, sustainable, long-lasting and eco-friendly.

Lesan’s original spark for clean sustainable energy was ignited in 2015 when she attended a community-based workshop in Tanzania. There she noticed the forests at the foot of Mt. Kilimanjaro had been decimated for firewood and charcoal. 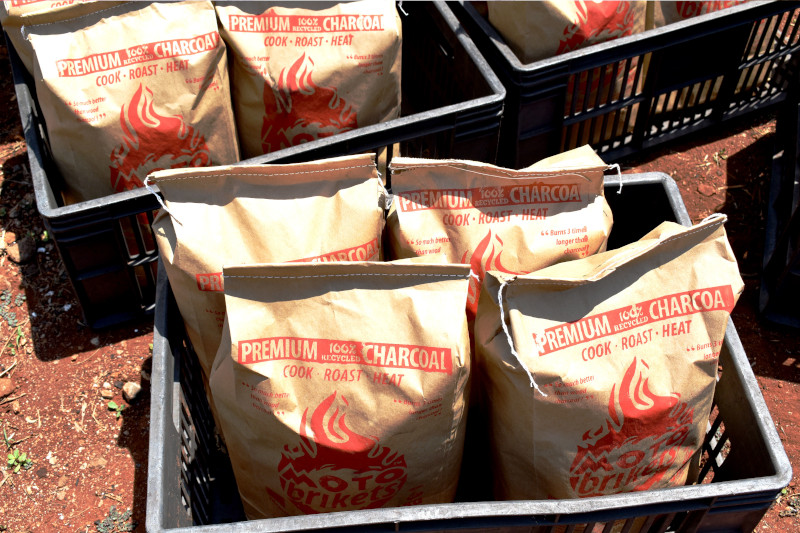 The continent loses more than 2.8 million hectares of forest annually, with some 8 million trees cut down in Africa between 2007 and 2011 alone. The charcoal trade between Eastern Africa and the Middle East was worth around 354 million US dollars during the same period, according to the UN.

However, it was not only the extent of the forest loss that pushed Lesan to action. During the workshop, her host, who was an elderly woman, had to use firewood to prepare food. This had a profound effect on Lesan; it sparked a vivid memory of her grandmother doing the same thing.

“It was the same scenario, this was 20 years later, her hut was smoky, she faced the same problems, the same snakes and spiders were there … I took a step back and asked myself, ‘Wait a minute, what’s going on here? Should preparing food be such a difficult and hazardous task?’ I think that’s where it all started.”

Like her grandmother and millions of other women in rural areas of a vast continent that has yet to connect its distant villages to electricity, Lesan’s host hardly noticed the hazards of her condition. 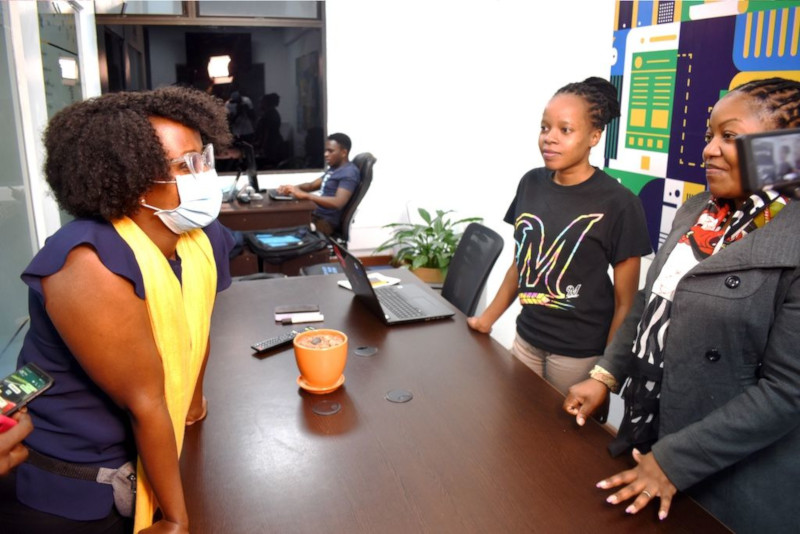 “She had gotten used to the environment … she coughed and teared up in the smoke-filled hut and I wondered how I could make it easier for her and others.”

Lesan set off to find a solution.

A degree in industrial design from Nairobi University and Lesan’s drive to become an entrepreneur led to a course in leadership from Cambridge University London, another in supply chain management from the Rutgers School of Business and a business design fellowship from Massachusetts Institute of Technology D-Lab.

Her labour has resulted in a production line situated in a factory in the southern suburbs of the city. In this large, walled compound, indoor and outdoor spaces allow for the preparation and drying of biomass briquettes. On this morning, Lesan arrives and immediately changes into a branded company shirt before leading a short meeting with her company managers and the factory foreman. Orders and the delivery of her Moto fuel briquettes are confirmed.

Soon Lesan is overseeing workers who are grinding, sifting and mixing the baked farm biomass waste and mixing it with a “secret ingredient” whose makeup she won’t disclose, to produce a thick, black homogeneous paste. A machine is then used to compact the black paste into tubular fuel briquettes.

In another area, workers are packaging the fuel briquettes into brown paper bags of 5kg and white nylon sacks of 50kg, for delivery.

“We usually package the 50kg for our big clients like the hospitals, hotels and restaurants. We also have womens’ groups whom we supply for retail. The 5kg packaging is for household use,” she explains. 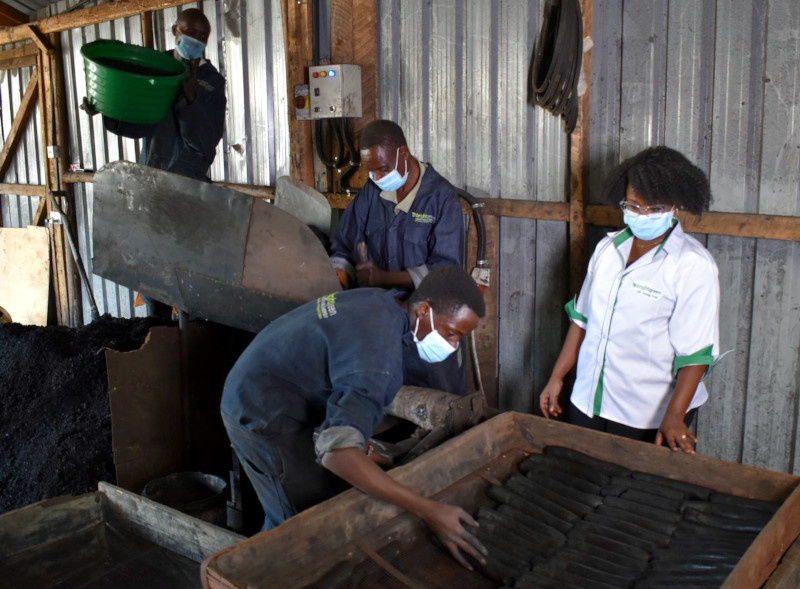 A new load of sacks of biomass waste arrives and she goes to receive it.

“We get this from the farm … It is packaged in these white nylon sacks and delivered once a week or depending on the demand. We then process it into the briquettes as you can see,” she says, pointing at her busy team of workers.

More of the wet briquettes are being placed on wooden trays and taken to dry in the sun – a process that takes two to three days. Once dry and packaged, the highly combustible fuel briquettes are ready to be distributed to a network of retailers, hospitals and hotels. The factory produces around a ton to a ton-and-a-half of Moto fuel briquettes per day, all of which sells out.

“We supply very many clients. In fact, we are not producing enough at the moment but we are looking to upscale, and supply to Uganda, Tanzania … the East Africa region as a whole,” Lesan explained.

Clearly, Lesan’s responsibilities at the business, while consuming much of her time, do not prevent her from thinking and dreaming big. There is room for her. Africa’s charcoal industry, much of it illegal, is massive. Lesan’s fuel briquettes cost half the price of tree-derived charcoal, burn hotter and last longer. They are also smoke-free and repel mosquitoes – an unexpected consequence that she discovered along the way. She is looking forward to providing more, better solutions to problems faced on the continent. She also hopes to be financially successful in the process.

“I have always said if we don’t raise up and solve our problems in Africa, not one will come here and solve them for us. So, for me, it was easy to start my own business. This is my contribution to the continent’s clean energy challenges,” she said.